Defeat your enemy with moves that stick!
Submitted by CoffeeChemist — 17 hours, 7 minutes before the deadline
Add to collection 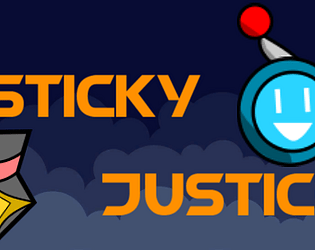 It’s always great to see a dev put so much of themselves into a game, great work!

- The instruction screen is a bit tedious to read for two reasons:
first, the font chosen is not the best to read block of texts. (you usually choose more simpler and neutral fonts)
Second... it's a block of text :p To make it easier to read, you usually would use as few words as possible to give informations (though the story is still the story). It can be a good idea to use illustrations to show the controls or separate controls from the story.
- The first boss phases are a bit frustrating as he spammed me at some point that green ball and it became repetitive.
- The second boss also didn't offer much variety (he only ever spammed 2 attacks) while having an enormous amount of HP. Thank god you forgot to remove the debug cheat. Space got the best of the robot :p
- The repetitiveness of the boss fights comes from an easy trick you can use to beat him: Just camp on the left of the screen. Aside the first boss and the green ball (that requires you to move), you didn't have much reasons to move. Just aim in a different place. I think you would have needed attacks that push the player out of the comfort zone. It might help to have a "map" of the level and make sure each area gets attacked in a way or another, and differently. Obviously though, with the time limit in mind, it seems like something difficult to achieve. Maybe the top parts could swing differently each time they are triggered.
- EDIT: The hitboxes seemed a bit strange. I got hit at some point without knowing how. Does the steam coming out from the robot hurt you? Btw, getting hit should get visual or sound feedback!
- the bubbles have good feedback when shot... but they give no visual/sound feedback when disappearing, too bad. Would have liked a satisfying little animation as they get blown
- The game ends a bit suddenly and the "noooo" at the end didn't quite convince me.


...that being said, the rest of the voice acting was top notch! Not expected and pretty cool.
Overall, the game feels epic and the boss fight is really cool. He might be a bit too static on his own, but his moving parts really sell and it feels just right! I also like the satisfying effects of the bubbles.

The voiced Butterscotch ShenaniJam caught me off guard so great, I like how you voiced the robot and also how well made the game is, The music is nice but I found a way to avoid all damage by staying in a corner you can avoid the first two attacks and easily avoid the third so that might need to be solved but otherwise amazing job

The voice acting is amazing :)

no idea how you made the stacking bubbles do damage but it's pretty cool that it works :D

Fun stuff. Second boss is tough! Took me a good bit to realize the damage spots but picked up on it eventually. Had fun with this one!

They could maybe do with flashing? might make them easier to spot as they do hide a bit when they are first seen.

Glad you had a good romp pal, thanks for playing!

Dude I love the voice acting that you decided to do.

Also found a way to cheese the game, m'bad XD

As did everybody haha. Glad you liked the cheesy voice acting. Wish I had the time to keep it consistant but sadly no.

Thank you very much for playing :)

Nice concept! I enjoyed beating the first boss, but ran out of steam on the second (maybe I shouldn't play late at night though!). There were definitely some spots I could hang out in and be safe so maybe make sure the robot can murder me anywhere!!

Great job overall!! I enjoyed the artwork and got a kick out of some of the voice work / sound effects... way to go!

The second boss has way too much health as I felt the game lacked content with only the first boss(although I will note quality over quantity here and I can let you figure out where my mistake).

Glad you got some enjoyment out of my cheesy voice overs :P (I'm so proud of that jingle haha) . For some reason throughout all of my games I really can't help but  do silly voice overs. In game like this where it doesn't take itself too seriously I think it does give that sort of humourous cringe.

Thanks for playing dude :)

Fun concept! Was a bit too repetitive and I found the areas that I can go to on the screen to where I could not be touched ;). Overall though fun game and would like to see more bosses or different styles of fights when he goes into his other form.

I'd love to make some more bosses as well haha. Was hoping for atleast two but due to how much I ended up learning while doing this I only ended up getting one done. Used a bit of my remaining time to make the prime fight. Worst bit is it hides my favourite recorded voice line outside of the jingle :P Thanks for playing dude

It looks super good.  I loved the butterscotch shenanijam bit.  I feel it didn't work for me though.  My character just wanted to float into the top right corner and the goo did not stick like in the video.  I did beat the first boss and well into the second.  But I could not close the game without cntrl,alt,delete.  Probably missing something.

I forgot to put in a pause menu so you could quit half way through. The character has excessive force at points which is causing that, sadly couldn't figure out how to neutralise properly without the character being hella janky.

Hey dude that second phase is no joke. haha. great polished game.  I like your "butterscotch shenanigans" take at the start and YOU HAVE A SETTINGS page which I think rocks!!! Nice job dude!

Thank you for playing! I really enjoyed doing that as a little silly things. For my terrible singing voice it turned out pretty nicely. Thanks for playing!

BOSSFIGHT.  That little robot is awfully excited about goo-based murder.

It simply does what it is designed to do. You can't blame him for being him dammit :P