The wheel of Samsara simulator
Submitted by Bereg (@beregfx) — 44 minutes, 15 seconds before the deadline
Add to collection 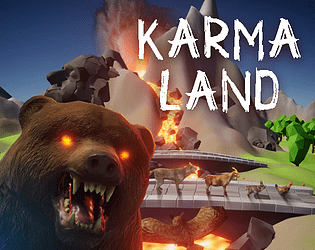 In what way does your game fit the theme?
Karma land is a game about reincarnation and starting all over again.

Did you write most of the code yourself and made all the assets from scratch?
We used some assets of the animal controller from the assetstore, credits are in the description.

Really cool idea and game! I love games that have an ecosystem to them. An idea that I have for this is starting at the top animal and working down and trying to become the dominant species. This would lead to harder difficulties and starts the player off being a bear! For becoming the dominant species, that would mean knowing where other animals' habitat is, what they eat, and what their predators are. I think that could lead to a unique strategy game once those places and nuances for each animal are set leading to a complex ecosystem. This would however change the whole game idea so your choice. Really fun game especially considering it was made in a week!

Thank you! We're already discussing options for expanding the gameplay. But first, we'll patch all bugs.

I think the stats were to harsh, I couldn't get out of the rabbit stage. Although, great game! I thought all the animals were real players!

Thank you for feedback! Actually you need to eat 20 carrots before you die to become a goat. It's easy if you run fast.

What a great way to interpret the theme! This is a great concept. I struggled a little bit with the controls, I think it would be better if the mouse determined the direction of movement.

Thank you! In the next patch we'll add options menu where you can change mouse sensitivity and other control settings.

I probably like the play on the theme as reincarnation. Good job!

Woah dudeee! Can't believe you manage to finish it in just 7 days. Loved every aspect of the game- the graphics, the mechanics, the adherence to the theme

Thank you! We used premade models of animals and character controller, other than that everything was made from scratch. Glad you liked it.

Dude.... Waoooooooooo i just loved the game so much... When i saw the game i was driven by the graphics and when i played the game... I was the same excited as i was when i saw the game... The graphics are astonishing... The music is amazing... And the implementation of the theme is innovative!! Well the fact that reborn as chicken as by commiting suicide is funny but it's good. And when i discovered that the owl can drop lava bombs.... Oooffffffff amazing... The gameplay is so amazing.  I would really like to see more animals and an expansion if the world with many interactive elements that would affect the karma much more.

Gameplay suggestion from my side is to improve the hitpoint and life of the bigger characters like bear as they must be hard to kill.

And the jump animation of the animals like the goat can be made better.

And there should be an option to evolve as i collected much carrots or complete achievements with other animals. Each animals should have different collectible elements and some certain ammount of tasks to be fuilfilled to evolve into some greater beings if the same race (like normally a bear but when evolved would be a bear with a whute beard or some kindof tatoo that marks the evolve with some increase in skills would be great).

I suggest to add a time controlling mechanism to the greater evolved beings to get to some areas that are inaccessible to normal beings of that race.

Loved the game so much!!

Thank you for that great feedback and suggestions. Glad you like the game. We totally need to improve and redo some elements. And we already have plans on expanding the game after the jam is over.

I'd love to see the upcoming updates !!

Can you check my submission as well!!  I'd love to see your feedback!

This is an excellent take on the theme fun to run around and just run away from the animals. the criteria to respawn was also pretty awesome it did take me a little while to figure out how that worked though.

Phew man, stressing me out :) Game was fun actually. I like the limited area to run around and the progression. It sucks if you die though to go all the way back to a rabbit. All that hard work, gone. I could see this a bigger game with a bigger forest and more animals to choose from, but without the rewind part.

Some feedback. At first I couldn't figure out why after 20 carrots nothing happened. I didn't realize I had to die on purpose. Think there should be an option that appears and you can choose to "evolve" or stay as you are when you hit your goals.  Because I would have never died as a rabbit.

Also, for awhile I thought the icon for damage taken was for water collected. Or at least water related. So I ran around looking for water. After not finding any I stopped to look at the level up again and realized it was for damage taken. Should use a different icon like claw marks or a health sign, or an explosion like outline.

Good work on it.

Submitted
What The Hole
LikeReply
BeregDeveloper1 year ago

Thanks for the feedback. We're planning on expanding the game, so your proposals are very valuable.

I really enjoyed my first two playtroughs, the game idea and execution are very neat indeed.

I think the controls for the characters need some tweaking and the mapping of the keys are very uconfortable, please add controller support and I can see myself playing this for quite some time.

Take some time to rate my game if you can.

Thank you. Controller support - noted. Will do.

I like very much the use of theme. Great graphics too.

The idea was really interessting. I think you could expand on this! The controls where a bit difficult for me, espcially the camera-controls. Other than the i enjoyed playing your game!

Thank you for your feedback. The camera could use some improvemets, totally.

This was really immersive! The camera control threw me for a loop a few times but overall was definitely enjoyable!

Thank you for the feedback! We should make the F1 option more obvious for new players.

Cool idea. It seems a lot of effort was put into it.  I wish there was a bigger objective that would make "selecting" an animal more meaningful. Also, I think it would control better if the animal would turn with the camera. Btw, loved the owl bombs.

Thank you! We are thinking of ways to expand the gameplay with global goals.

I really liked mechanic of being able to control different animals, but I think there are some things that could see some improvement. The visual style of the landscape clashes a lot with the realistic look of the animals, the movement is also sometimes a bit janky when trying to turn and the audio gets really repetitive really fast (maybe you should've add some kind of background music). But overall great idea and execution!

Thank you for the valuable feedback. Sure it can get better, we are thinking of improvements right now.

If you make it multiplayer, you can count me in as an already addicted player :)

Thank you! Yep, multiplayer feature is always on our minds.

This was a really unique take on the theme and it was fun trying to figure out what would affect my karma!

Thanks a lot! Is the help screen hard to read? We are thinking of simplifying it a bit.

Wow, that's strange. Thanks for the report! It shouldn't be doing this.

Fun idea for a game, I liked running around as the different animals. Nice touch with the glowing floaty carrot in the house, I was hoping there'd be something hidden in there.

Thank you for your kind words! And we call it Super Carrot.