Gameplay is interesting, even if digging is a bit tricky it's cool to play ! 👍

I wanted to play this game instantly when I saw the first mockup, because I love the art style.

But as other says, there are bugs that make it not as fun as it could be... Jump is strange, like in weightlessness, and Bruce Bee is stuck at one tile from the bottom of the screen, so it's difficult to see where we're landing (too many times it was on a spider 😱)

If you make a post-jam build, I'll be happy to play again to see where fate is pushing Bruce Bee ! :3

Seems easier than the first adventure (not a bad thing), even if I got trouble finding the last 3cts. I enjoyed playing, and I really like this little cat now :3

Couldn't win the Queselha and Lapuerto fights because of a bug (no victory after killing all enemies), but it was nice to play!

(I think it needs an in-game reminder of strength/weakness of each units, as I was constantly looking at the game description x))

it was fun to play, graphics are simple but efficient ! I like that the transitions between floors have some gameplay mechanics 👍

Thanks ! I do will continue it !
I joined #FinishThatRemakeJam to have a deadline ;)

It's strange that this game get so few votes, because it's really cool ! A little hard, but fun with nice graphics !
Except that movements feel strange because of the resolution ^^"

Nice game, I like the concept ! Movement are hard because the player's one seems "turn based" but enemies always move. I had trouble using checkpoint to change mages, input seems to be delayed.
This game has potential to be better ! ;)

Nice luftrausers-like, but I don't think 64*64 rez is good for this kind of game, it's nearly impossible to see enemies coming x)

Game seems cool, look good, but I had trouble understanding what's going on screen, and how to play the game.
But there is potential! ;)

Great work, I wasn't expect such an adventure to get some beers ! I really enjoyed it ! 👍

Thanks again for your feedback, I'll look into these bugs and ideas !

Cool game ! But I think it'll be cooler to have some feedback when a player is charging attack, most of the time I didn't know if I was actually doing anything x)

It's amazing how you make such animation and art-style at this resolution ! 😍
Short but great game ! 👍

I had trouble figuring out what to do :/
Still don't know how to move in menus when pressing Z+X. I think I miss something, the game sounds cool from the screenshots/gifs and other comments.

Nice game ! I'll try to go to the end !
The first enemy encountered is hard to beat :P

One of my most anticipated game of this jams :3
Nice work ! The difference between old and new graphics is noticeable !
I liked the joke of npc giving hints on commands without knowing why :P

Cool game !
I bought a map, found the treasure, but then I went to a hard part of the sea, with fierce krakens and a lot of other pirates ! x)
I'll love to see more of this game !

Some small things : is that normal that I can finish the game (I got all the fireflies!) without all the keys and without opening all the doors ?
And I don't like how the background moves with the character when I jump. A bit of parallax movement would be great ! :)

Cool gameplay, some levels have given me trouble !
I liked the humour in the intro & outro ^^

Nice game ! 👍
I get to the end, I've seen the feels coming but it was nice.

I liked the way you set up the story :)
I had trouble with the way the character move (but it's logical with gameplay, I understood that later) and with the fact that weeds appear exactly when I want to plant x)

Thanks for your comment !
All these issue are here because I was late to the deadline. x)
But I have team up with a musician so there gonna be music/sfx, and I will fix bugs ;)

Thanks !
Yes, there is an highly chance that it's link :D
There is no sounds or music (I was late for the deadline) and text shouldn't be small, (this should be fixed in the last upload !)

The text should not be small. I still struggle with Unity canvas ^^"
But it should be fixed in the last upload !
Thanks !

Thanks !
Yes, walking against a wall is giving the enemies a dangerous advantage !
But the movement of enemies is predictable, so you could use the environment to help ! ;)

Thanks for your comment !
Most of that is bug caused by the lack of time (I posted a devlog to explain the situation :P)
At this time, there isn't really a goal, so you can consider that you have won if you killed one enemy in each of the nine rooms. (hard because there is currently no options to heal yourself !)

Thanks for all your comments ! :)
@crabmusket: Oracle of Ages/Seasons are some of my favorites games, so it's can't be a coincidence !

Since the beginning of the jam, I've tried to work on the game in between other time-consuming things. I thought that it would be easy to have a base for the game using the official Unity 2D "Roguelike tutorial"...

But I was wrong, so very very wrong. I couldn't fix bugs because of the way it was coded. Couldn't make it "my own" because of these techniques that I'm not used to, and I did got very frustrated not being able to understand and expand it like I wanted to.

After tried all the ways I could try to make it work with that base and failed, I decided to start again from scratch ! Keeping some little things I understood and learned from the tutorial, but making the game the way I'm used to, with tiles and arrays ! 😋

So the programming of the actual game started two days before the deadline of the jam. I had a sleepless night, a lot of coffee ☕ and an 9 hours long livestream to try to code all the thing I wanted to be in the game.

What I wanted to be in game :

You can see the differences between the two lists.
I'm far from what I wanted, but I'm happy of all the work I did before deadline ! Live stream programming was also a great experience !

It was a really cool Jam and I'll love to participate again next year ! I've already seen a lot of cool games in the

Now, I want to work on the game to make it whole (add all I want, and more, like a map screen), and learn a few things by the way (like Dungeon generation and tile-base pathfinding algorithms).

I'm planning on an update for this month's end ! 😜

A small rogue-like inspired by Zelda 1 !

The idea of the game is based on a mockup I did for Pixel_Dailies. The theme was "Dungeon", and I got inspired by the dungeons of Zelda 1. Some 8*8 tiles later, I've got this : 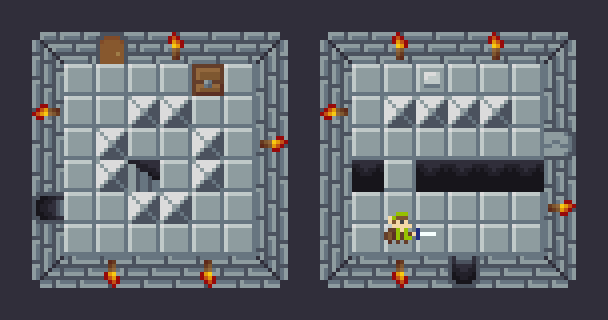 Then for the jam, I've extend the mockup, with a title-screen (there will be a transition between up and down), some more tiles, characters, items, and the inventory !

There is a lot of things I'm gonna change/rework, but this can wait. ^^

For now, I need to work on actually making the game !

And it's gonna be hard. First problem, the resolution... But hopefully, with the help of the people on the Discord Server, we have a guide !
But I think I'm gonna try another method. Will talk about it later !
I've had some problems with the import of my sprites, but again, people of Discord were here to help, thanks !

I'll add the link to the topic of last year for more info :
https://itch.io/jam/lowrezjam2016/topic/19276/unity-setup-request