Submitted by Roberto Romao — 5 hours, 53 minutes before the deadline
Add to collection 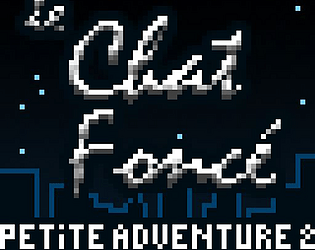 Seems easier than the first adventure (not a bad thing), even if I got trouble finding the last 3cts. I enjoyed playing, and I really like this little cat now :3

The Dark Cat goes around collecting coins. This is an old-skool platformer -- jump from platform to platform and collect all the tokens until you've got enough to win. There aren't any enemies; your nemesis is missing a jump and falling all the way back down to the ground and then having to climb up again. This is really well implemented, though; the main character is almost featureless but still clear and nicely but simply animated, and the sound design is good. I can completely imagine this being an actual released game in the mid 80s. I think it could be a little bit clearer that a locked door actually is a locked door, though; I found the door to Upper St, and couldn't get through it, and then later on I somehow had a key and then it opened. I don't know where I got that key from -- presumably I picked it up somewhere? So that was a little confusing. There are also a couple of places where it's slightly hard to tell whether a platform is a platform or is part of the background. But these are very small complaints! Nice work.

I will work on a better BG map and some improvements after the vote period ends! Thx a lot for your comment/review :D

Very cute game - I loved the graphics and the music, but I got lost! lol

I will do a better job in the future to make a minimap or something like that, thx for your comment!

Nice game, with a background music that fits the night, the gameplay is also working fine, well done.

Really nice art, controls are satisfying and responsive, I only managed to find 4.98 but I enjoyed getting there! Only downside is the platforming segments seemed to share the same pattern.

Nice art! It did feel like a bigger resolution game with a smaller window though - it was difficult to see around. Good feel and gameplay - could do with more variety.

I wish I had a little more time to plan more scenarios haha, thx for your comment!

You could try to add some enemies to spice up the game.

There aren't enemies because I prefer a more peaceful game haha  :D but i'm glad you like it!

That's a charming little game! A little confusing, I gave up the search at $4.75, but I liked the graphics and pixels.

Maybe I put some mini map after the jam vote period! :D thx!