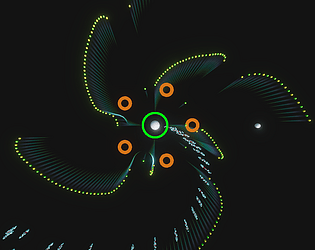 Please list any pre-made art/music/other assets you used.
Audio is from default assets in LMMS and samples from pinball machines. Also, Freesounds.org.

Anything you want to say to players before they play?
In a world where heros wildly rotate around the bosses they need to defeat by shooting them with pinballs... This game suddenly happens.

Don't forget this file needs to be extracted using software like 7-Zip in order to get to the executable!

It was pretty addictive and fun! But I think, it needs a tutorial section....

Not bad, however there are a few things that would need polishing.

Waves sometimes are too hard, without visible empty space.
I'm not sure if ammo packs are random, but I couldn't find any a few times.
Also rockets could be more intelligent and less spammy.
It turned out that the best strategy is to shoot everything you have almost instantly, with small breaks = 50% boss hp, a few seconds after start.

Keep up the good work

Totally fair! I have some ideas I've been ruminating on... We'll see =D

I really enjoyed the concept and the visuals! The music is pretty great, and it makes all the rhythmic aspect of the game really fantastic!

It's very hard though. Some patterns seems unavoidable, but that's still okay. My biggest grief was the aiming. I just couldn't hit that boss, and eventually just shot randomly! (spoiler: it wasn't a winning strategy either)

The game is still fun, and provide a great musical experience. Congrats!

Hey, thanks for the feedback =D I'm definitely going to look into developing this further, I have a couple ideas =D

Cool idea and it's pretty hard! I love the animation and music!

Looks stylish and has nice music, but it's really hard. Still very fun, though.

A bullet hell mixed with a rhythm game is a really cool idea, and I liked the implementation of maneuvering around the source of everything. I really like look of a black background with bright colors to easily differentiate everything.

One of the bullet patterns was seemingly impossible to avoid. I didn't quite understand how the bullets worked, so I just shot randomly until enough ricochet hit the boss to beat it.

That makes sense =P  Yeah, the patterns were something that definitely were needing improvement.  We ran into a big time bottleneck IRL so we only got the bare bones finished and not a lot of the polish.  I'm definitely interested in keeping with this idea and I'll keep in mind of the feedback we get.  Thanks for playing !

In your video playing my game, you mentioned whenever someone says they made their game in 24 hours it's better than yours. I think it was only true this time, because of the state of your game. With a bit more polish it'd be better than mine.

I've only done 2 attempts at trying to beat the boss here. But, for some reason my bullets stopped working, and idk if that's a bug, or I missed something or what was happening. Also, as AiriKarin said. One of the bullet patterns did seem almost impossible to avoid. The thing is shooting out its flowery/spiraly kind of thing, and then starts shooting the more targeting beam type thingys. You have to move to dodge the things that kind of target you, and it makes you run right into the normal spiral pattern. It was tough.

Overall, I like the game though. I want to make my own bullet hell at some point. It didn't even cross my mind to try one for a music themed game jam.

Hey, thanks for the feedback! THere is an ammo system, so you have limited bullets.  I agree, we needed more dev time for this but our schedules just exploded until the very end of the jam.  I'm still interested in expanding this game, however, so I'm appreciative of any feedback received!

Thanks for playing =D

Whow! Such a great thing! This bullet hell game is probably the most original I've seen in this game jam. I really like that the supply for health and amo only stays for a short amount of time, forcing me to be constantly on the move. The blocking of the rings indirectly create some very interesting bullet patterns and there were definitely space to dodge bullets so I really appreciate that. However, there are certain elements in the games that makes me feel a bit unfair. First, one bullet pattern is impossible to dodge.

I die a little inside every time this comes up because it feels like a forced hit except if I were on the middle right of the screen. Second,  I can't really accept that the precision of my gun is so low that its target is always offset to the left of the boss. Timing the shoot so that the bullet comes to contact with the ring I want is very finicky, and in the heat of the fight I usually leave it to my luck.  I understand that it makes hitting more challenging but it'd make more sense to me if the rings apply negative/positive attraction forces and bend the trajectory of my bullets - still very challenging but more intuitive and fairer: I don't have a faulty gun.

Some more smaller feedback: Sometimes the amo and health pack dont appear on the beat, Idk if that's intended. The avatar stops following me if the mouse position is too far to the left or right of the screen - only the center square registers mouse position it seems, which leads to unresponsive controls at times. This last bit is nitpicking but I know you could do better with the end/restart screen. That would significantly increase the immersion ;D.

All in all, a very innovative bullet hell. Well done!

Hey man, thanks for the review.  I totally hear you on all of these points.  A little dev told me "PUT IN THE BUTTERFLY, I LIKE IT" so... that happened (the pattern you snapped =P).  Overall, we needed more time to develop, we only got a few hours between the three of us because of life issues.  I would like to see a lot more responsive systems overall, the mouse controls were added pretty last minute and we didnt't have a lot of time to debug.  The timing on all of the bullets/ammo/etc was all put together using unity's music analyzer, so that DEV WINK WINK STORMY said it was perfect and I believed him =P  IT's a pretty powerful system but needs a good tuning.  I was happy that we got a rough prototype working but I really wanted more time to work on this.  The win screen, I put together and I'm indignant that you don't like it.  It's beautiful and definitely not a last minute way to give us an actual game loop ;)

Ahh I see. I wanted to use the output from Unity getspectrumdata as well, which is like you said, very powerful but not quite reliable and so I ditched it and went with another solution. Now I understand why sometimes the health and amo pack doesnt appear. I think the controls were responsive, just that it didnt cover the whole screen so I had to be careful not to move the mouse outside the central square. Butterfly pattern was cool to see, but I think there are cooler patterns such as the flower you had, which still gives room to dodge. Don't get me wrong that I didnt like the win/lose screen. I just thought it's not up there with the beautiful graphics of the game and the win screen specifically didnt give enough satisfaction when winning. I mean mine didnt have an end screen to start with so I cant really complain about that haha, I do look forward to seeing a more visually appealing win/lose screen =D.

Since you played my game I wanted to come give this a shot, but I'm away from my windows box at the moment. Can I ask what engine/framework you used to build this game? It definitely looks neat.

We just built this in the personal edition of unity using the teams/collaborate feature.  It's not as neat as you think since it's pretty underdeveloped but give it a shot sometime =D

Agreed!  We tested this on a few different systems and never experienced any impactful lag.  Let me know what you experienced =D

It was a tiny lag. During the white laser beam phase.

I'll take a look, thanks for letting me know !

Thanks for giving it a play! We agree it definitely needs some more polish. Can you let us know what you thought was too difficult? Just the sheer number of bullets, or how much health/bullets you were able to carry? Just so we could get an idea of where to tweak some more:). Thanks again!

Sometime, I was just telling myself "how can I avoid all these bullets ? They're too many, and they're too fast !"

After following the creation of this project on Twitch, I am reassured to see that the original difficulty has been revised downward, since I was able to play and win ! Yeah !  ^_^ Very catchy, the "particles" fuse everywhere, it is very successful. Congratulations

Hey thanks Yaz =D We did a pretty extensive update to make it a bit better overall (IMO) so if you get another chance, check it out again =D