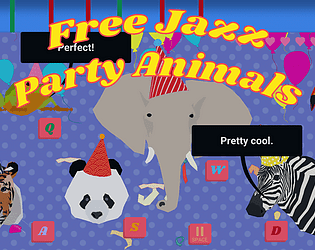 Please list any pre-made art/music/other assets you used.
None

Anything you want to say to players before they play?
Follow these four simple steps and you should be fine:

I liked it. Fun graphics/sounds etc.

I think anything that needs to be said has been said. I also liked what you did with the animals. Great Work!

Yes, I agree with Daniel.  This is a really cool game but needs a count in/metronome/BPM setting to really shine.  Very polished and pretty fun.  Maybe you could unlock new animals over time by getting more points and using previously unlocked sounds in your new beats.  That would be pretty neat!

I love it! It's a sampling - DIY jazz improvising game. It didn't take me long enough to come up with some sick hip hop beats. Then I realized my rhythm was off due to a metronome not being there. I actually like that the metronome is not there. Adds on a bit of a challenge! Well done! :)

Thanks! The challenge with this game would be to make the transition between recording your beat and playing it seamless to allow the player to play a continuous perfectly looped beat. We have some ideas for fixing it that we might experiment with in the future.

Definitely a cool idea. Apparently I have terrible rhythm though. Anything more complicated than a simple beat and I'd basically insta lose. Still, I love the idea and if you're thinking about expanding on it I'd love to see.

lol this game is a hoot... and really hard.  I wish there was a metronome or beat of some sort to anchor your playing on.. even if it was some abstract jazz drumming or something.

Haha, thanks a lot for playing! We have some ideas for making the game more rhythmically grounded, which we might experiment with in the future.

Awesome concept. I really like that all the control is given to the player to choose their own difficulty and music. It has a lovely aesthetic.

Really glad you enjoyed it!

Very cute! Needs some beats to guide it and some forgiveness though as its really hard to get right! Would be cool if you could layer those beats together to form a full song.

Submitted
The Dance Floor is Lava
LikeReply
cornercasegamesDeveloper1 year ago

Thanks! Cute is what we were aiming for. We considered polyphony but felt it was out of scope for this jam.

I really liked the colorful animal aesthetic, the sounds and the concept. Just hearing the animal sounds with drums behind them brought a smile to my face.

The menu itself was more fun for me then the game. I spent about 3 minutes messing around on the menu before trying out the actual game. In game, I would try and get a groove, but ultimately it would get to the end and then loop a partially formed out of time beat.

Thanks a lot! Glad you noticed the layering of the drum and animal sounds.

You've made some really valid points about some of the shortcomings of the current version of the game. Solving the problem of the beats being out of time when looped is tricky without a metronome to guide the player but I think it's doable. Clearer visual guides for the expected inputs on the 'piano roll' is definitely doable and should be improved!

I think it's an awful lot of fun! I only wish there was some kind of metronome or count-in, to help with really getting into the groove.

Thanks! The idea for this game was to experiment with what would happen if we took any kind of rhythmic reference out of a rhythm game. It's all about free improvisation with the sounds you're given.

I agree, though, that adding a metronome would make the game more structured and easier to follow. It's just not what we were going for in this case.

Funny, but not fun.

It was fun to make though! I agree that the gameplay still far from fulfils its potential but it's a start.