Recreation and improvement of the minigame "The Wild Tokay" for the first Miz Jam.
Submitted by emma-fm (@fm_emm) — 6 hours, 43 minutes before the deadline
Add to collection 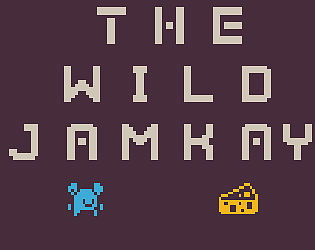 Things got intense fast :D    Throwing the food was satisfying.

One of the foods disappeared while I was holding it then the game crashed. I think it was because I pressed the 'put item down' button.

This is really well put together! There was this weird bug on the browser version that crashed it but other than that super polished, felt good to play. The controls felt a little cramped for me, but I'm guessing that's a byproduct of including single keyboard co-op. Lots of room for expansion, and one suggestion from me would to maybe have the food always re-spawn so you have a choice of all available food, as having the needed food spawn just before the targets spawned made it a bit predictable.

Awesome work and keep it up!

This is pretty well made and has a lot of potential for being expanded upon. They only thing I could negatively say is that the controls were a little uncomfortable for me.

I really enjoyed playing this game! It's hectic, but in the fun cooking game kind of way. It would become an awesome mobile game too. If you want to bump the difficulty down, then adding more places for the food to spawn would help.

Also, the music is a BOP. Nice polish there!

Neat, would be good to have food spawn in different areas and maybe have wrong food spawn as well otherwise nice job.

Plays very well and is pretty polished. Sad i couldn't play in coop.

Umm only issue i had is that i could just stay on top and feed the food as it spawned.

That was super fun! I really liked the gameplay, trying to serve the customers in time! (I went with a pretty similar theme in my game, haha!)
I wish there was a way to drop or throw away items after picking them up, otherwise you get stuck in a position where you kind of /have/ to feed the animals, and that's kind of unfortunate.
Also, I did run into a bug - I tried to pick up a piece of cheese at basically the same time it was de-spawning, and I was running around as if I had something in my hand, but I didn't have anything. When I tried to throw the "nothing" I had in my hand, the game crashed. Probably just need some kind of check at the start of the de-spawning process that gets rid of the ability to pick up the item!

But overall, really, really fun game - and super cute. I had a great time with it! Great work!

There's actually a way to drop an item into the ground! It's key B. Sorry if that wasn't clear in the control scheme haha

Great idea to make a game like that with this art kit, I enjoyed it :-)

A fun little game. It works very well. I didn't know how controls work first. I try to drop the food (with "B") in front of people. But after I figured it out it worked just fine.

Pretty fun and simple game! It froze for me when I first ran it, at about a minute in or so, but after refreshing and trying again, it worked fine.

Oh those pesky rats and crocodriles keep asking for food!

I love the simple concept that actually turned out really fun! The difficulty had me on the edge which I personally like :]

Cute game. It was pretty difficult for me though haha. Also the game froze on my second try when I reached the angry face but when I reloaded it worked properly so I'm not sure what the issue was.