I'm late for work AND I'm stuck in a time loop!?View game page

A short interactive story about being stuck in a time loop that may not end how you expect.
Submitted by GreenClovers (@CloversGames) — 5 hours, 25 minutes before the deadline
Add to collection 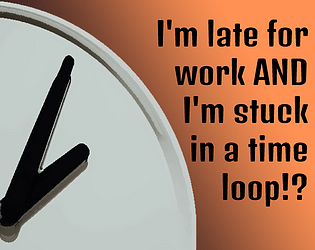 I'm late for work AND I'm stuck in a time loop!?'s itch.io page

I love time loop games, and this one delivered.

The sound effects were a nice touch!

I really enjoyed the inclusion of sound, it really adds to the immersion. I also think the gameplay is an enjoyable conceit, with every loop adding more information, and sometimes more options. It's fun to solve the puzzle.

One thing I found weird was the (mild spoilers) "help man" > "punch woman" > "dash past" sequence. Once I've knocked her out and gotten past her, my only option is to go back and headbutt her and fail. I just didn't understand why I'd go back and do that, but maybe there's more behind it? I've never seen the "good ending", so.

There's a few typos here and there that took me out a bit. It's not a big deal! Especially in a gamejam. But generally, or if you want to update this at some point, running the text through spellcheck could help. Although I know that's hard in Inkscript. But as an example, "You see the ally across the street", ally has a different meaning than alley, so I was confused for a sec.

This was a blast from start to finishes. Great job.

I love that time loop, but most of all I really enjoyed the fact that I got offered a peek view at another possible ending! That's just a great experience :D

Finally, I was always thinking in "what if time loop will suddenly stop working" direction, like how do you know, it's magic, you can't predict the magic rules!

I liked how it's brief, simple and gets to the point very quickly – I think, that's the best recipe for jams where people should play into a bunch of games.

A little thing I would wish for is that a good ending could use more "knowledge"... though, if you didn't want to make much of a puzzle from it intentionally, then it's probably okay, because there's a really small chance that any player will get this in 2 runs because he'll obviously try all these different options.

So thanks for this game, it entertained me a lot in such a small time!

Love the audio cues (the man crying sound effect is brilliant). I also appreciate the content warnings at the beginning. Very well produced. I received the good ending first, but then checked out the streaking ending. Love a story with true consequences, haha. Clean, efficient writing as well. I'll have to borrow your idea of having a google form linked at the end.

Thanks! I think pacing and efficiency in writing is something that I've really managed to improve on over the last year or so.

And honestly yeah, go for it! It's been really interesting to see responses, for example no one has had the "Knock thief out" ending, which is good as it's the one that breaks the theme a bit too much. Going to see if I can use a database to store the data automatically in the near future,

The new options felt like they came just as I started to question the game logic, which is hard to do! Well paced entry!

Thank you! I think pacing is starting to become second nature for me!

A really solid entry! It shows that you don't need a """deep""" narrative and can do really well with a simple story and a good interactive structure. The quite brisk prose was really easy to read and got out of the way of enjoying said structure, and so at no point did it sag and become a challenge to stay engaged with, which is a problem I've found in other entries. (Not that I'm too harsh on them for it, there's very little time to edit these things and address those problems).

Submitted
In Reverence for a Captain
LikeReply
distractedmosfetSubmitted99 days ago

Oh, and good job managing to get the sounds in there! It adds a lot. And is something that I regret the absence of in my entry.

I liked this one! I like stories that play with the concept of a time loop and how hard they are to replicate and correct. It was quick, and interesting! But I would make the sound effects a bit less loud next time? :c Or put include "loud noises" in the content warnings.

All and all, nice!

Thanks for the feedback, I will include that!

I really, really, like it! Super original, and usually I'm a bit annoyed with narrative loop game because it sucks to read the same thing over and over, but yours really had just the right amount of text. I go two bad endings before finally getting the good one, but it was worth it!

Well, not gonna lie I got the "streaking" ending first and then I played again and got the "good" ending! :D hehe...
Playing this was very entertaining and I found the sound effects really delightful! I like that it was short but nicely thought through! Good job!

I managed to get the good ending, yay! That was fun!

Very cool! I got the good ending and I had fun working out the sequence of events needed to pull it off, like any good time loop story. I also appreciated the sound effects - simple but effective at setting the scene throughout.

Got the streaking ending.  Totes worth it.

Loved the tone throughout.  Also, how the loops built on each other to unlock the next steps.  Nicely done!

Thanks! At the time of writing, it seems that 75% of people have gotten that ending... 👀

Ok, let's do this. Spoiler alerts for my game.

I've been making games with Ink for a while now, out of the games I have, over 50% of them have been made with Ink, so it's safe to say I'm a fan. Didn't have a chance to take part in the jam last year, wanted to make sure I did so this year, even though I didn't have access to my computer the entire time, so I new I had to do something simpler, hence the text-only game.

I played 12 minutes recently, and I enjoyed it until it got all weird and "Prestige TV" on me. In one of the loops, I accidently killed the wife when she turned a light on a light switch and got electrocuted. The character you play as has a little freak out, but talks about how it's OK because time is going to loop again soon, and I thought "Ooh, but what if it didn't!" because I'm a sicko? I think time loops are interesting, because their this weird narrative construct where characters can do things without consequences, so it's asks people what would they do if they could do anything. I remember reading an interactive comic, the sort of comic where readers give suggestions about what the main character should do, kind of like Homestuck, but before, when it was still Microsoft Paint Adventures. Anyway, the comic was called something like Groundhog Day Adventure, and of course all the suggestions given to the main character were things like "Throw that woman into the road" or "Pull your pants down" and things like that, and I remember one person commenting on the comic "What's funny is that we would be suggesting all of this even if we didn't know everything would restart". And I saw that and I thought "the best thing this comic could do would be to just never loop, and have the character live with  everything they've done". Sort of like an extended anti-joke?

Sorry, that was a really weird and long tangent to say that basically, this game is one big anti-joke. What if a time-loop stopped for no reason after you did something that would have big consequences? No reason behind it, it just... Stopped? That was the idea that I came up with, and this is what it resulted in.

Interesting fact, the original game was going to be called "I'm stuck in a dentist waiting room AND I'm stuck in a time loop?!?" but I didn't like the flow of the title and I decided to do this instead.

Next I'll write about things I would have liked to have done better, but I'll do that next time. For now, I'm tired and I went on a weird tangent looking at old Microsoft Paint Forum Adventures tangent. The stuff I read on there was from 2009?!? What the hell...