Dungeon: Out of CtrlView game page 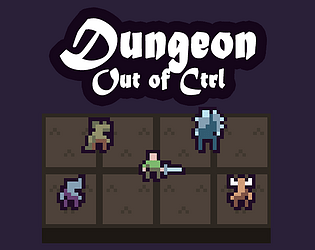 Dungeon: Out of Ctrl's itch.io page

How does your game fit the theme?
You can't controll the character, he's "out of control".

I really like the concept of this game; to make it a bit more random the could be an "at least 1 in every action" rule :D  Because if I put all 6 points in Attack I do have total control - he will attack 100%.
And it would be cool if you wouldn't have to pause the game every time to make adjustments.

But it is definitely one of the more original interpretations of the theme! :)

Hi there, i'm glad you like it! I released an update right now, you can play it again with the tips you sayed and more. ;D

Super cool idea. I had fun putting all the stats into attack and watching as the enemies ran around while I killed them ruthlessly. Overall super fun and with some some/music this could be a fun idea to continue.

Submitted
Master of None
LikeReply
devfirestudioDeveloper1 year ago

Hi Frozen Spirit, I'm glad you had fun with the game! I just updated it today, there are no sounds but I think you can like. Thank you very much for your feedback.

The controls are nice, but I would prefer either for them to be during the game play, so, it's easier for the player to click and change the strategy or maybe between the rounds, like, you can only pick your strategy at the beginning of the round and you need to keep that until you win or lose.

And another thing is that I didn't really notice a big difference changing the values, most of the time adding everything to attack just to the job, maybe some changes in the balance helps the player to see the difference better.

Hi Sharbelfs, thanks for your feedback! Your tips will be heard, I hope you will come back to play it when this is updated.

I think there was quite a good consistency with the visuals and theming.

- I do not feel like I can be faulted for saying this... the game is very boring. It's a bit harsh, but I think the idea of using "out of control" thematically has been executed too literally in the game, and the removal of control takes away value from the game rather than add an interesting twist or concept for the player to experience. Overall, the idea of a random generated action, takes away too much agency and engagement from the player.

- Without considering the previous point, maybe adding a fast forward button would help reduce the duration of the game where the player does not interact with the game. In addition to that, you could scale the number of levels as well, instead of 7, you can increase the number of levels significantly since the player would not be waiting for very long during each level.

- Maybe add more choices to the game, like upgrades that improve chances of attacking blocking etc. or add better swords or shield or armour. Add gold so the player has something they get and collect while waiting. Add perks/traits/skils, that trigger manually while the character is moving or with a chance on attack or defend.

Hopefully, its not too harsh, I added some suggestions which i think would improve player engagement. Hope you find them useful.

Hi Dekatria, I liked your feedback!
The visuals using the 0x77 assets are not good and there is little time for game development, so I decide to use the free resources and make the game more fun.

I also find the game very difficult, for some just watching the fight can be fun, but for me, it can improve by improving the interaction with the player in some way.

I've been thinking a lot about the progression of the character and levels, things like gold, skills, fight styles, etc. I'm already working on it and I will need to test some things before updating.

Your tips can be very useful, thanks for your feedback, hope you come back to play it when it’s updated. :D

Wow, this is a really fun game! Good job!

yeah sure! also why are you talking to me in Portuguese?

Nnice concept! I think some sort of progression would be nice, like a level up and new points to spend and maybe even new stats or items to change the fight style or something like that.

Hi, i'm going right this direction, i'm working around player progression and add another style of combat like archer and mage. I have to test this thing before. Thanks for your feedback!

Really interesting idea! It was really fun to change the values and watch things play out. As others have stated, it might make the game more tense if you couldn't pause, if that's what you're going for. Good job overall!

Hello, I already made an update leaving responsive for mobile and I removed the pause and the distribution of points made it simpler. thanks for your feedback.

Nice concept and well executed, looks very polished. I like the graphics!

I do feel like it would have been much more intuitive to just have some up and down arrows to adjust the points, instead of left and right mouse buttons to increase and decrease. I also wasn't realy obvious what kind of skill would work better for certain enemies.

Still, a good game, and well done for only 2 days!

Hi dannolav, thanks for the feedback. I will update the game soon and after that, there will be other updates like progression, skills, new enemies, scenario, save, etc.

It might be more fun to control without pausing. I do like your interpretation of the theme! Well done!

Submitted
Requesting Permission to Not Die
LikeReply
devfirestudioDeveloper1 year ago(+1)

Thank you, i'll work around the points! :D

Would have liked to change the values without pausing, but I did like how big of a difference shuffling the values could make

Ty, i appreciate your feedback! :D

I really like the game ! I think it would have been nice to change the values live instead of pausing the game. The art and animations did make it nice to watch the game play go on.

Hi, thanks for your feedbeek, i'll work around the points, i think to create more characters with fixed points, with abilities like rage, heal, evate or samething like that, and change the points live.

Those are some great sounding changed - i would be interested to play an updated version if you get around to it. Keep me in mind!

Thank you a lot!

Thanks The ChronicPhenix, i'm glad you enjoy it!

It's a great concept. It took me a bit to figure out why I would ever put points into reposition, but eventually realized that you are auto-healing. I wish there were even some simple sound effects. It would make the battles feel even more dynamic!

Hi thanks, the game design is not my best, i confess. I'll work around this, thanks a lot!

Nice concept. Not really an idle game, as you change the character actions during a fight. I love it!

Submitted
Out of Control!!!
LikeReply
devfirestudioDeveloper1 year ago

Hi, thanks! I'll work around this idea, i'm glad you like it!

I quite enjoyed this game! Made it to level 7 after a couple of attempts before losing. But, it's a very cool and fun concept.

I liked experimenting with strategies for each level. Seems like an interesting idea to build upon.

Hello, thank you very much, I'm glad you liked it!
I think I made level 7 very difficult, I managed to beat it and go to the next difficulty only once. I will really develop this idea better, I have many good and simple ideas for the game.

The idea is pretty neat, i enjoyed a lot!

Hi, thanks, I'm glad you enjoy it!