Only One ArrowView game page

Fluffy and his magic arrow try and save the forest (Updated: Play in browser.)
Submitted by NeatGames (@neat_games) — 8 hours, 15 minutes before the deadline
Add to collection 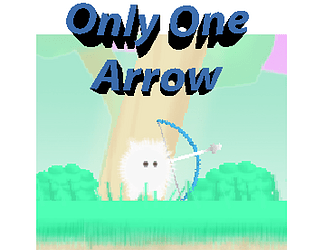 Only One Arrow's itch.io page

Wow, one of the best games of this gamejam that I played..
The art style, animations, even the musics and sounds, I like everything..
Also, good use of the theme.

Well, I had real fun playing this game..
Congratulations on your game for this jam o/

Submitted
Becoming only one
LikeReply
NeatGamesDeveloper239 days ago(+1)

Thanks for checking it out!  Glad you liked it~  I hope to improve it with other's feedback

Hey! This probably had the best learning curve of all the platform games I've played so far in the jam, you did a great job with first level!

I would have liked to see some of the enemies spread out though-out the levels more, as opposed to every enemy encounter being an arena encounter. Variety being the spice of life and all that!

Great suggestion~ I will remember that for my next platformer!  Thanks a bunch for playing

No worries, it was fun!

The character feels satisfying to use, especially shooting an arrow an landing right into it afterwards. The idea and execution have a lot of potential, I would have liked having one arrow be more relevant to the theme, since you recall really fast. The camera shouldn't be centered on the player, so you see more to your right: there's instances where you jump but can barely see the next bit of environment. Dealbreaker, though, is the lack of checkpoints. I do not feel like replaying an entire level upon dying.

Thanks for the feedback and playing! I still haven't learned how to do save points~ i will definitely study it next!

I love this move when arrow come back

Nice job! It controls well, and I love the way the arrows wisps through the air back towards the player! It might be cool if the arrow could do damage on the return as well? That way you could try to line it up to strike multiple enemies at once!

That is an amazing idea! After the jam I will try to implement that! Thanks for playing and giving the tip~

This is very nice and polished! My only complaint is that a lot of the game isn't impacted by only having one arrow to shoot. Basic platforming isn't impacted much, combat is effectively unchanged, because the arrow returns so fast. It's still a fun game, but I think you could have gone more wacky.

Thanks for the suggestions and playing! I will brainstorm how to utilize the main mechanic better~

Submitted
The Only Light
LikeReply
NeatGamesDeveloper242 days ago(+1)

Wow thanks!  Happy you liked it ~

Very frustrating design. Could have done with learning from the latest GMTK video about Celeste. It was well thought out but I don't think the design concept was particularly unique or really fundamentally altered the way the player has to go through the game. The lack of checkpoints was the real killer, probably primarily because I did not find a lot of the basic platforming all that engaging. Certainly not bad but there could have been more thought into the player making decisions rather than attempting to gauge the floaty platforming.

Sorry it was frustrating for you  I spent most my time figuring out how to code the arrow shoot, becoming a platform, and also being able to recall.  I made the levels last.  I actually watched that video and tried to make my character have very responsive controls haha.  I've only been making games since winter~

Great game, I love the pastel colour scheme and the overall artstyle! Keep up the goodwork!

Submitted
One Shot In The Chamber
LikeReply
NeatGamesDeveloper242 days ago

Thanks for taking the time to check it out!

The best I've played so far! It's beautiful, plays nice and fits the theme!

Wow thanks for the kind words!  Glad you liked it :D

Amazing game. Had so much fun playing it. Congratulations on your result.
The gameplay is simple but so well executed. Soundtrack and SFX are perfect for the game. Amazing  work!

Thank you for playing!  I spent a lot of time on sound, because I want to improve at it.  (it is my weakest skill haha) Thanks again!

Who eat and then puked out all the crayons? This game looks awesome! The music is great! It is a bit simplistic, but that's not a bad thing.  Solid play on the theme with the only one arrow!

Haha my gf wanted me to give it a pastel color pallet so I went hardcore!  Thanks a bunch for playing!

A bit simplistic but plays well, my only issue might be that the game is too bright and white.

Gameplay-wise the controls are decent if a bit floaty, i would make the gravity higher and the jump stronger to compensate. Maybe it could be zoomed out a bit more to see the game better, too many leaps of faith.

Yeah I noticed it when i was final play-testing, but no time to have the long jumps to bee seen better!  Maybe I'll add a collide trigger that zooms out the camera there!  Also it was intended that the player felt light and fluffy~ however i will tweak it some more after more input.    Thanks for playing~

Simple but cool interpretation of the theme. I love the adorable art. Some nitpicks:

1. The levels are too wide. Most of the time you won't know if there is a platform before jumping. Also needs some check points.

2. The tall platforms where that require you to use the arrow are repeated without any change. You need to shot at the same exact  place of the platform again.

3. The arrows should be a one way platform(You should be able to pass from below).

Thanks for the great feedback!  I will try to implement these~  I actually tried to let the arrow be a pass through platform, but couldn't quite figure it out lol (because my weapon is 360 rotation if you shoot to the left the arrow pass through is flipped).  I will study how to implement your suggestions. Thanks!

The game is really cute. The music is lovely and the arrow mechanic feels very satisfying. Jumping is also quite in line with how the character looks. I would add some checkpoints to it, as pitfalls are the silent killers and I wouldn't put white text on bright background.

Thanks for checking it out and commenting~  I really want to learn how to add check points, I will definitely study how to do it!

Neat little games you have their.
It is quite fun and the controlls feel generaly responsive.
The small details on the visual side do really add to the value
(mainly speaking the background and paricle effect).

Thanks for checking it out!  I worked on the art while I brainstormed what to do.  I'm happy I got the arrow working and some simple levels~

Thanks for playing!  I'm happy I was able to make it work haha, I will check out your game too!

haha, i played your space game

Oh cool! haha.  Please check out this game too ~