You can move a box only one time. Get out of the warehouse while you still have moves left.
Submitted by Sb7 Studios — 8 hours, 33 minutes before the deadline
Add to collection 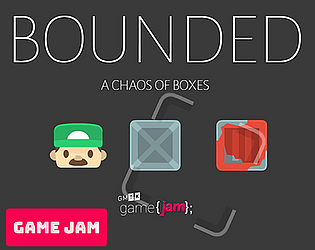 That was awesome. Would love to have a post jam version with more challenging puzzles and maybe a level editor in game.

I played your game too and rated it, awesome game!

Congratulations for the game! I loved how the mechanics were designed to fit the theme. Rated <3

If you are interested in Tower Defense, check out our game. A tower defense where you can control only one tower at a time.

Congratulations for your game too, I took and look and rated it, awesome idea!

Very fun! Puzzles were challenging without being frustrating, and the levels were very readable with the different boxes having distinct colors.

Reminds me of sokoban but with a twist!) Very interesting game)

One of the best fits with the jam.

Sudokish puzzle great use of the theme. Seems very solid!

Cool! I like this little puzzler. It's simple to grasp but deceptively simple to solve. It would be nice if moving into a wall or an unmovable object would not consume a step though it never caused me to lose.

This is definitely one that I want to see further published with some fun music added to it. Nicely done :D

This is a great way of applying the "only one" concept to an existing idea! Really cute graphics, quite clean.

Have you seen the GMTK video on puzzle design?: https://www.youtube.com/watch?v=zsjC6fa_YBg&t=2s

I'd tried making puzzle games for years and could always come up with neat mechanics but I always fell flat when it came to making levels that were challenging but didn't feel cheap. The advice in that video helped a ton.

Thank you for playing my game, as for the puzzle design I gotta say that I wasn't focused at all in the puzzles, mostly it was about the mechanics of the game and fixing bugs before the jam ended. Levels that are showed in the game are just to give the sense and idea of the game.

Yes, I will take a look at your game too.

Great game! I included it in my GMTK Game Jam 2019 compilation video series, if you’d like to take a look. :)

I really appreciate it!

The box moving games have been done since games started being a thing, but being able to move a box only once changes the mindset you have to have when confronting the puzzles. Blocks moving also in one direction are a nice adittion that gives diversity although the level designer should be careful because sometimes they give away the solution quickly.

Theme, only one movement per box, some boxes move only in one direction, fitting.

Originality, it doesnt stray much from the genre but the twist on the mechanics brings life to it and a breath of fresh air.

Thank you for playing my game and the feedback! Really appreciate it!

Very interesting concept! Now that the jam is over, you should definitely spend more time on designing more organized levels and complete it. I would also recommend adding an undo button. This has a lot of potential!

Thank you for playing my game and for the Ideas, might work in the game when the ratings end!

Really nice game, the "only one direction" take was really well executed and the level design is really nice, but, to me, the moves limitation is quite useless and kinda frustrating sometimes

But overall, I had a great time, congrats!

Thank you for the feedback! I appreciate it a lot.

It's really good. A shame it's this short.

Wow! Such a challenging and cute game. Moving one box at a time was a really great use of the theme.

Submitted
By The Blade
LikeReply
ManOnBoard1 year ago

About the game idea in which you can move a box only one time or that some boxes can be moves in only one direction is amaizing, it fits with the jam but it needs some work because the game currently has some bugs, some boxes overlap with each other and if you press both keys player moves diagonally, I'm not sure if that is supposed to happen.

Are you suppoesd to press up and right keys in the same time ?

Pretty good :) Its a great game for a game jam.

Boxes can be moved only one time I see what you are going for. Amazing !

How old are you ?

Awesome! played it more than 30 times!

You can simply ask for more levels...      Puzzle levels are enjoyed only the first time when you are trying to figure out the level.