Fish Out of WaterView game page

Help Blubs the Blowfish escape the from the pirates and flop his way to freedom
Submitted by Team Jumbo Studios (@TeamJumboGame), Lexal (@Lexal_Hunter), blkdragon — 3 hours, 10 minutes before the deadline
Add to collection 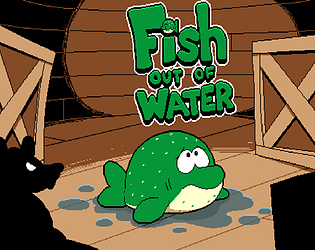 Fish Out of Water's itch.io page

A good entry! This game forced me relearn every instinct I have as a gamer to move before jumping! The obstacles don't reset after you die so it gets easier with each attempt. Also if you wait long enough on the title screen the music stops looping. I really like the concept but the collisions are very rarely in the players favor when platforming and avoiding obstacles so it's pretty difficult.

Its a cool idea, but I had a couple gripes about the execution. I felt that it was quite hard to accurately control your character, especially in regards to mid-air controls and changing directions. Also, I felt that the levels were a little cramped, and I would often hit my head on something mid jump and fall all the way back down. Other then that though, I had a lot of fun! Your game looks and sounds fantastic. Very nice job!

The level of polish, detail, and fun is nothing short of outstanding.  You knocked this out of the park.  A well deserved 5 stars.  I'm completely blown away.  This is absolutely one of the best games of the jam.

The game is super cute and charming, but the difficulty is very high! I got to the cannon level and had to quit. The previous levels were easier because once you hit the bombs they would go away in the next turn. The controls are a bit too difficult too, and the collisions are super tight to be able to move as freely as intended. Overall, I really enjoyed it, congratulations!

we are looking into rebalancing the levels, as well as making the collision masks for the player and other objects more accurate in a post jam version.

The game is super cute and charming, but the difficulty is very high! I got to the cannon level and had to quit. The previous levels were easier because once you hit the bombs they would go away in the next turn. The controls are a bit too difficult too, and the collisions are super tight to be able to move as freely as intended. Overall, I really enjoyed it, congratulations!

I absolutely love this concept and this game is super charming, so be forewarned that this is going to be a long post but know that everything I say is meant to be constructive. I feel like this concept is exactly the kind of thing that Mark was hoping for when he picked the theme. The game is just so incredibly charming, and totally reminds me of something that I would've played on the Amiga as a kid. The art style and sound are perfect, and feel like they literally could've been part of a full game from that era. The amount of content is amazing. I didn't get past the level with the cannons, but it would still be a crazy amount of content for a jam if that was the last level.

Gushing out of the way, I feel like the controls are a little bit difficult and make the game kind of a chore at times. They're perfectly serviceable when not much is going on, but as soon as there are a handful of hazards on the screen, I started feeling like I could've predict how Blubs was going to handle.

Another issue I had was the collision.  It feels super easy to get hung up on things. I also felt like I died numerous times when I clearly was not touching a hazard.  A lot of this came in conjunction with changing sizes, and I understand that can be kind of difficult to rapidly change the collision and convey it to the player in a way that allows them to react. Perhaps maybe a little leeway on the collision and also increase the collision when you puff up on a little bit of a delay would be nice.

The mine enemies not coming back when you respawn makes them feel kind of pointless. I essentially ended up dying to them almost every time and just having to platform back to that spot. I didn't really learn much each time, I just got back to the same spot and continued on.

Only other gripe is that there's a glitch where you land on a surface after being on a wet surface and keep sliding.

But seriously, great game that just needs a little bit of polish. I would totally buy a longer, polished version of this game, so I hope you folks keep working on it.

Thank you so much for the detailed feedback.  We are looking into fixing the collision masks on the player and hazards to be a bit more forgiving.  We’ve also moved the mines about a bit to make them less of a blind hazard and will probably make them res pawn but work more fairly.  As for controls we have a few ideas to simplify them for ease of play but don’t have anything specific yet.

Super fun game! :D The art is really cute and well designed, the music is on-point, the sound effects are adorable. This is excellent! The only issue was that I seemed to sometimes hit a bug when sliding on the wet surfaces - sometimes I would keep sliding on all other surfaces I landed on (and this usually led me to my death).

we had a big with the water we weren’t able to correct before the deadline, continuing the slide until you jump was out compromise.  We can look in a permanent solution in the post jam version.

The controls are extremely finnicky and need some refinement, but this looks like a worthy entry to the jam and the pixelart looks pretty good for what it's worth.

Amazing game and amazing polish! And a ton of content too! I think this is one of my favorite games in the jam so far and it's absolutely incredible how much you have done. I would've been perfectly content if the game had ended at the first level but then it kept going further and beyond! Easily a personal contender for best game for me.

Oh my god your game is so charming. I like the mechanics and concept and derpy fish and wanted to rate it as highly as I could, but I feel like the level design pulled a few too many nasty tricks that didn't feel fair (those damn mines). Still, it's one of the better game jam games I've played and you should be proud of it (and make more starring this derpy fish)

As PotatoNinja said I had some problem of knowing when I could control myself in the air and not, but other than that I really liked the controls after getting used to them!
It felt like playing an old SNES game or Gameboy Color game.
Felt alot like a complete game, great job"

Great game, although it would help a lot if the controlling while blown up was a bit more consistent. It made the game a tad more tedious when I wasn't sure if I would lose side-to-side control after tapping the inflation button midair. Other than that, I found the game to be rather enjoyable. A lot of effort went into this game, and it shows. I like it.

I found I didn't add an extra 0 in the code which is causing the player to lose control when floating at a smaller size. I fixed it now but sadly too late hehe. Thanks for giving it a try and glad you liked it!

This game takes me back to the SNES days! The controls took some time to get used to, but they seems solid and consistent, so I could use them to my advantage after some time. The difficulty was just right to keep me going and feeling satisfied when i made it to another bucket :) I was surprised to find more levels after completing the first one. So I guess you completed the core mechanics early on and actually had time to build good levels after that, makes it fell more like a complete game and not "just" a jam game.

Thanks! Took a day getting the mechanics working then enemies were just made as we made levels. Still working on tightening things up for when the Jam is done

Very silly, well put together, and a joy to control!

Thanks so much for playing and your feedback! Glad you like the art style and the gameplay! I’ll definitely use what you pointed out there moving forward. Thanks again!