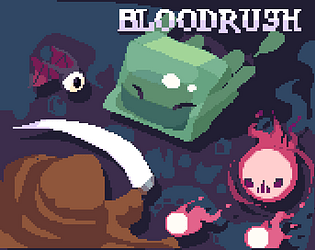 I really liked the graphics of the game.
The hit actions felt like game freeze, it's need some rework, I think.
Would be cool if I may destroy boxes and get something inside.

Submitted
No way to stop!
LikeReply
soBnBSubmitted1 year ago (1 edit) (+1)

Incredible work on this!!  The graphics are awesome and the play is really good! really fun! -love the art / overall aesthetic!  -hit action was pretty juicy and great music too!! -awesome job! :D

The "juice" isn't as on par, but I'm literally SO in love with the art style!

That was really nice ! I enjoyed every second of it :D

Some thoughts :
- I really I could have played with a controller. The game page mentions you could not build a web version, but I really care about here is controller mapping. Seeing what you achieved, it seems clear to me that it would have been fairly easy for you to add it and the game would have been much more enjoyable to play ! Not that it was bad, but this kind of game clearly require it in my humble opinion.
- Got so scared by the sound of the character jumping out of the water xD it made me laugh, and maybe it was on purpose, but just so know it scared so that if it was not your goal, maybe reduce the volume a little bit :')
- Gameplay is great, it works fine, and it has a nicely made pacing so it was truly enjoyable. I had some trouble getting used to my range at first but it came pretty fast. About the blood mechanic forcing you to fight not to die, I think it lacks some explanation. The UI is the only element that seems pretty obvious to me, but since it looks like a classic health bar I did not realize it was reducing, and the blood coming at you when you kill an enemy is too discrete for such an important mechanic. The thing that had me die once because of blood is that I wanted to explore a little bit, just out of curiosity, and well my character just died while walking :D and I thought : if you need to fight without stopping, maybe the map has no reason to be large ? Don't get me wrong, it's far from huge, and I also understand the waves get bigger so you need more room, but maybe it could grow on size with wave index or something. Also, I perfectly understand that it's a jam and thus there's no tutorial, which if you had the time would have avoid me to die like an idiot haha. And about the health bar, just wanted to say that I'm in love with the blood animation!
- A mechanic that I did not use at all is the dodge roll. I didn't feel I needed it since my character was moving fast enough, at least relative to the enemy attacks, even ranged one or the dashing enemies. I took some damage from those attacks, but I was not used to the roll since I never used it, so most of the time where it would have been useful, I didn't have the reflex to use it, compared to a game like Enter the Gungeon (I might be wrong but seeing your roll animation, I would say you got inspired by it :p) where you roll almost all the time since the very beginning because you're forced to (which is great for a game made by a studio called DodgeRoll...).
- I'm sad I could not destroy the crates :( there are only few elements in the environment, so I was expecting the crates to have some interaction. Also because ground and walls are both grey, so seeing an element with another color, really standing out, made me think it was here for a purpose other than decorating or collision.
- About the artstyle, I think the game looks charming and everything has been polished. What I would just say is that I found the ground too clean and smooth for a dungeon ground, and the point lights did not help because they made it shine too much. I also think the game could have been a little bit more saturated and way more contrasted : I found it more beautiful looking when the player is low on health (at least for the contrast, obviously the post processing coming with it would not fit anytime, but - hopefully - you get my point). I also think your main menu doesn't not credit the game. The start button seems placed randomly, same goes for the title, and the inputs are taking all the bottom of the screen, which makes it look like you did it in a few minutes at the end. Not a real issue, but since it's the first thing you see, you should polish it a little bit :)

Other that all of that, it was great ! And to be perfectly honest it's making me want to work on a game with a same art direction haha, I really love it and I think you nailed this 3D pixel art style. Again, gameplay is great and I did not say anything about juiciness because here again it seems clear to me that you spent lot of time on it, it's really well made, feels great slicing enemies and killing them while not being too much, great job for that.

Hope my explanations were clear, feel free to ask if some were not due to poor english :D

The explanations are more than clear! I agree with each of your point 100%. Most of the features you suggested were planned on some point in the developement (like controller movement, main menu, tutorial, destructive elements), but they were cut to focus on actually finishing the game :P This project was overscoped as hell so I had to crunch last couple days to even deliver the version you see today, which is good, but far from perfect. Thank you so much for such detailed feedback!

charming visuals. combat gets pretty repetitive, maybe the player should have different abilities?

I loved absolutely everything about this game - the look, the feel, the sounds, the music. The gameplay feels great and it’s good fun slapping the creatures around with your sword and dodging their attacks!

My only critique - no pause menu, so I can alt-tab and tell my team to try the game!

How can someone make such a great game damnit that too in 8 days. My personal favourite!! I love mochii's pixel art and the game in itself is so visually apealing. JUICY!!!!!

I like that I can just hold down lmb and it will auto-attack, really saved my fingers xD

I really dig the art style of this game, it looks really good with the mix of 2d and 3d. The camera shake and sound effects make each hit real meaty, and I like the health bar mechanic that slowly drains so you're forced to go on the offensive. I also like all of the quality of life stuff you put in, such as the arrow markers and the seeing enemies through walls thing.

The gameplay started feeling repetitive until around round 15, which is when the difficulty kicked up with the pink enemies. I would have ramped up the difficulty progression faster, as right now it feels like I'm not really doing anything until the later rounds kick in. Adding weapon upgrades or offering different types of weapons would have also helped make each run more interesting.

I also think that enemies should visually explode on death and leave their remains behind. The weapon hits sound super good, but they also make it seem like the enemies should do more than just disappear after they die. A simple implementation I would've done is take each enemy sprite and cut them up into pieces, then when an enemy dies, their pieces get flown across the floor randomly and disappear after a few seconds.

Overall, great entry! I had a lot of fun playing this. My highest score was round 26.

Really good job. Very nice game (the visuals and juice are top notch). I didn't quite enjoy playing it as much as I did looking at it.  Congratulations!

Absolutely amazing game!  The graphics are amazing, and the impact of not only hitting enemies but the player getting damaged by the enemies as well feels so satisfying and really juicy! I love the concept of having to keep alive by fighting, it was fun, and a really good response to the theme.  The music and the sound effects throughout it were really nice too!  Overall I really liked this game!  Well done!

Not to discredit other entries but this is by far the most beautiful game of the jam! The difficulty curve and overall pacing are great in my opinion and I just couldn't get enough of that hit sound. :P

Unfortunately the game doesn't really take advantage of the full arena or incorparate movement that much so you mostly remain in one spot, but that's my only complaint.

You three make an excellent team!

I really like the sprites, and the controls feels really good :)

Amazing visuals, sfx, and juice overall! Huge kudos to mixing 2D and 3D so well. I had a lot of fun with it!

I do think that the challenge should start increasing a bit faster though, since the first 15 rounds were easy to the point I was getting bored, and then after it started getting challenging I died and didn't feel like sitting through another 15 rounds.

Wow, seriously amazing game! Visually absolutely amazing, the 2d pixel art with the 3d environment was implemented perfectly. The art was beautiful. The fact you were able to make this whole thing during a single week is rediculous! Congrats on finishing the game jam and making such a well polished game!!

The art style reminds me of Octopath Traveler, I really like it! It looks amazing! Animations are clean and neat, and the enemies look nice.

The gameplay also feels good, but lacks a bit of variety.

Only criticism I can think of is add some sfx for enemies or turn them up slightly as sometimes it felt a bit quiet even though there are tonnes of enemies and it is hectic!

Honestly same :p I was constantly working on the game for a week and still can't get past 17 haha