You're forced into making drug drops because of new cybertech that drugs lords invented.
Submitted by BigRoyNL — 1 day, 3 hours before the deadline
Add to collection 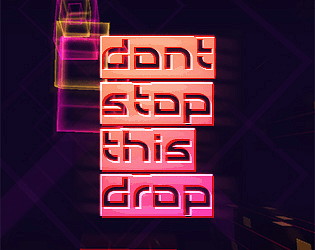 I also included this in my article on indielicious! http://indielicious.com/2014/03/18/review-cyberpunk-jam/

I think that because the first face of first building doesn't react it would have been nice if it said "Practice" and the displayed keys as you were meant to press them in accordance with the windows and "Jump" when you had to do so.

For the game itself, it was really nice. If the blended in clearer with the music and if the Z,X,C corresponded to different sounds it could be a real hit. Also, of course to start with a song with lower bpm to let people get better while feeling like they are good instead of failing and missing while learning.

As I said, really enjoyed it! Great work

Wow, the graphics are really nice and polished.

Apart from the confusion at the start the game is pretty solid. I especially like how you can snap to any side of the buildings.

Very intense, fun game. It took a second to figure out exactly what to do, but once you get past that it's a challenging, frenetic game with very original mechanics.

I was a little confused at first that I wasn't starting on a building. I also noticed that sometimes you will get one building right next to another, so that it feels like there's 4+ rows on the same building, and controlling on a vertical plane feels a bit off (maybe the camera should rotate so that the surface you land on is always horizontal?) But overall I really enjoyed this; the aesthetic is great and it's a good play on the theme so I've rated it quite highly.

Great aesthetics in this game, loved the music and visuals. I also liked the sense of speed this game gives, zooming past blocks at a quick but manageable rate.

This is very polished, nice job!

Really well done entry! I included it in part 11 of my Cyberpunk Jam compilation video series, if you'd like to check it out :) http://youtu.be/5UcTFlQOF-s

Really great game for a jam! Excellent look and sound. If there was only one thing i would change, its that I'd either try and match the windows to the music, or have windows spawn in patterns instead of randomly. It was a little had to get the button presses right when they were at a different time to the music or radically changing their spacing. Other than that though, nice job!

great game! Took me a few tries, but when I got the hang of it, it was loads of fun.  My only suggestion would be to add an effect when you connect to a building because I often found myself floating just above the surface.

Amazing! At first I used AWSD to move which was insane! then I found I could use the arrow keys and this changed everything, I tried to mostly use the tops of the boxes, might be cool if it made you use other sides, like no notes appear on top until you have used the other 3 faces.

Graphics are cool and like the movement, overall an excellent game!

~*Congratulations on creating your first game*~

I was a bit confused at first, and it took me a while to realise you could press more than one key at a time.
Once I understood what was happening it was really nice to play and I felt like I was improving each time.
It is annoying having to move from keyboard to mouse to restart, ha ha.

Really enjoyed this entry - very clever take on the guitar hero mechanic (would love to play it with one of those controllers, actually). I know it would be hard to work in with it being an endless runner, but it would be cool to see the ground approaching to really drive home the free fall/base jump aspect.

Good stuff! It took me a second to realize I needed to align on the building, but once I figured that out, it was great.

No audio indication my energy was getting low.

Nice take on the theme!

Cool concept, very intense! I sometimes had trouble judging where the indicator actually was and if I was clicking at the correct moment, but perhaps that's part of the challenge. Nice work. :)