Submitted by meganinja223 — 10 hours, 22 minutes before the deadline
Add to collection 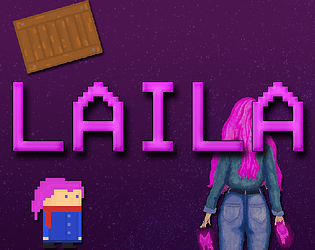 Ranked from 97 ratings. Score is adjusted from raw score by the median number of ratings per game in the jam.

In what way does your game fit the theme?
To solve puzzles you need to rewind objects with your powers so they return to the original position, sometimes you are going to need to move the object so only then you can rewind it.

Did you write most of the code yourself and made all the assets from scratch?
Yes! Everything you see while playing was made by me! The main menu art was made by a friend!

Well done, I quite like the game and how you used the theme!

Submitted
Venture To The Beginning
LikeReply
IIMikitoIISubmitted200 days ago

Super simple and very sweet. I think there were a lot of creative puzzle and platforming ideas with the rewind mechanic and I'd love to see more. Graphics wise the game is just a bit too simple, if it had a more modern pixel style, then the game would be set.

I liked the rewind feature a lot! You know that feel when you like "whaaaat...how i suppose to do it?"  Spent some time and understand it! It's feel great.

Then the mechanics begin where you need to think and jump quickly at the same time, and with the second I always have problems. The third lvl (where there is a small waterfall) knocked me down a little, but I remembered (because I read HOW TO PLAY) and changed to a general view of the lvl. On the next lvl you remind it, but it would be better if you do it early). The ability to rewind seems to me to be used up very quickly. I don't think that it is necessary to change this, if the restart of the lvl took place instantly (without a splash screen that takes time) it would be less painful. In any case, a really interesting and complete (most importantly) game. It's always nice to play a game where you can complete whole lvls, pause, quit, restart, or mute the sound! Polished! Great job!

love the idea, and the controlls work well! I did get confused in the beginning since it sais "LMB" and i had no idea what this was the letters l m b did nothing. But the page text told me it i needed to used my mouse. better to say mouse instead of LMB.

Its was a fun game! wel done the rewind stuff worked great and made for some interesting puzzles!

At the overall really nice game but the animation of the charcter is too simple.

The music starts to disturbing at some point.

The place of the mana bar could change I think.

When you click to the rewindable objects the mana decreases. I think it should decrase when you rewind it.

Nice. But animations could be better and after some point music became  anoying.

I really like the premise behind this! rewinding objects and using them as platforms is fun. The circle player hitbox feels a bit weird however. Very good overall though!

Nice job! I like the graphics and concept! The player movement feels good and I like how the rewind mechanics are all on the mouse! I also like how there's a rewind bar, so you have to be careful with how you rewind objects.

One thing is that I think the music loop could be a bit longer and a bit more interesting since it had the same tune repeating the entire time (That might just be me though).

Other than that, great work!

Submitted
Ghosts of Futures Past
LikeReply
MatthewSubmitted201 days ago

Overall, pretty nice game. It looks great and it was probably the best platformer I've played from this jam.  I like the movement but it can be a little weird sometimes.

Cool game, had a nice concept.

Good points :
-The level design is nice.
-Rewinding objects is nice and intuitive.
-Takes its time to teach you the mechanics.
-The mute button was nice to have, after a bit.

Could be better :
-Movements feels clunky, mostly the jump
-The rewind has a bit too short of a range, which often got frustrating.
-The arrow keeps its hitbox even when stuck in a wall. I understand the reason but it's a bit awkward in certain rooms.
-The mana requirement should either always be the same for a category of items, or have an indication. It's a bit weird to grab the same crate but somethimes having it chew through your mana, or being rewindable until the beginning of the universe.
-Please, make it so you only have to read/click through the dialogues once.

Overall pretty nice, but too clunky and held back by some problems.

And I ragequitted at the level where you have to stop a crate falling onto spikes, get onto it, and rewind to the top of the room. I understood the idea, but the short range + mana consumption made it awkward to do. Combined with the dialogue playing every time I retried, and a glitch that made the character do a moon jump when trying to get on the crate (which of course gets me out of rewind range and makes it end its fall), that was too much for me.

Really nice feedback! I appreciate! You are right on these points, I should have done more adjustments and balancing. Maybe in an update after the jam!

Anyway, thank you so much for the constructive feedback!

I like the use of the theme and the types of puzzles you were able to create with the one basic mechanic. I also enjoyed the art style, although the animation could use some work (not that I am anyone to talk). The only thing I can really say is that the mana timer seems a little harsh to be. I think I would enjoy the game a little more if there was a little more time on that. Otherwise great work.

Not bad. the design is beautiful and the music is eager haha overall a good job

do you play my game?

Submitted
Tape me up
LikeReply
SunspotGameDesignSubmitted203 days ago

I really liked your game! It was very fun game play, and the music and design was very nice. The one confusing thing was that you said "some objects require more or less mana to move," each object should have a mana rating or something so the player know how "moveable" an object is.

Good submission. Liked the rewind mechanic the most! Good job

The level design was really good as you introduced a new mechanic with an easy level before giving the player more challenging puzzles, so I knew what each mechanic actually did. One thing I noticed is that when a moving platform moved vertically as well as horizontally, the player was not moved with the platform, so I often fell off as it was tough to move at the same speed as the platform. The rewind was done nicely without any major bugs, and the art looks good too :)

The core mechanic was working perfectly fine and was easy to understand. The movement was good too, but the jump could be improved a bit. I think the music loop was a bit too short and got repetitive fast, but the core sound is great and you can definitely create more out of that loop.
You did a great job making the game and I think adding this story was a great idea!

A very challenging and fun puzzle game! Great job on making all the art yourself and following the theme closely.