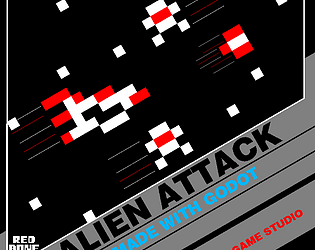 Did you work in a team?
I was the one who created the game, but I had a lot of support from my friend and my girlfriend.
THEY LOVE THE GAME !!
This is the first game that I finish it.

Was the resolution a challenge?
the truth is that no, I always love this style of video game, I think the only bad thing is the FONTS, there is not one that adapts to this resolution.

What did you learn?
I think it was more for the experience, I always liked programming, the only problem is that I never finish a game. Also, this serves me more for the career I study (Industrial Design), And solving problems is something that designers do.

Love the palette and the sounds, this feels like a very authentic retro experience.

What I really like is that only 3 colors are used, which gives the game a certain charm. Gameplay is great for me personally just too hectic. Congratulations on a great game.

LikeReply
Hunt The PastSubmitted1 year ago(+1)

I really like this game, the boss is hard but fair and there a whole lot replay value from using the shop and it risk and reward sistem.

my biggest problem is that enemy bullet does not have any indication on the radar. since the only indication of enemy shooting is just the sound effect, it became really confusing on what enemy is currently shooting and where the bullet is heading into. and the fact that the bullet can sometime come from behind the player leave me with many moment where i was just playing normally and

suddenly i was just death without having anytime to understand the situation.
another problem i see is the boss have way to many hp, maybe instead of making the boss have massive hp perhaps make them around 100 but add a invisibility frame every time the boss is hit instead. this way the boss would not be defeated easily with just rapid button press.

But other than that the whole game is enjoyable enough that i have beaten the game just using the normal weapon. if only those two problem have been fix i can see myself spending some time to beat it to do No-hit run.

Max HP is for broken weapons (like shotgun) in the game.

The idea was to make a challenging game, and you had it without any upgrate, the truth is that I take my hat off. I'm very happy you liked it!! And thank you very much for the criticism, I will keep it in mind for the next games I make

This game is hectic! Had too much fun with it. Music was perfect for the mood… simple and stark color scheme improved the looks. All around great entry.

I love the colors you chose, and the 3D text effect is great. I did something similar to that in the ending to my game.

I also like the cinematic opening, and the feeling of rushing around in space is very cool. The game is tough but that seems to be intended.

Thank you very much !!, yes, the difficulty of the game is on purpose

This was pretty good! I found it tough to get the hang of at first, it didn't immediately click with me that i should always just be flying to one side, but after that initial hurdle i started to really enjoy it! Nice, limited palette and it sounds great too! solid entry!

Thank you very much !!, I am very happy to know that you liked the game, and I still enjoy your game Acrid Quest, it is really a very good game!

love the limited color pallet.. but the game is super super hard.

Yes, being a shoot em up arcade, I thought of it like that, to make it of this style, did you try shooting and moving wildly?

I will come back to it.... I want to kill that space ship... it kept getting me when it showed up.

Hello! I played your game on stream! If you want to see your game played with live feedback, you can find the VOD and watch from this sheet: http://bit.ly/bean-stream

Thank you very much for playing!

Really good restrictions on the palette. Fun game, very hard though, reminds me of the old arcade tables.

Thank you very much, I'm glad you had fun !! in effect, the difficulty is based on the arcades, you lose and start again until you learn the patterns hahaha

Interesting game, I liked the controls actually. I took some tries to realize what was going on, and even then the game is so hard I couldn’t pass level 1. I think the player hit box is too big because enemies kill me when I didn’t feel like they are touching me. Overall, good job on your first full game !

Thank you very much, the idea of how difficult it is to give it an arcade style, I'm glad you liked it !!

Really love the sprite work. The red/white/black palette coupled with the music makes for an intense experience.

It's a really great Defender-esque game. Which means like Defender, I'm also terrible at this game!

haha thank you !!, I appreciate it very much!

Good job overall, but controls are a bit awkwards… there is almost no control over your horizontal positioning. I am getting some warnings in the console with this message though the game seems to work just fine:

WARNING: _update_root_rect: Font oversampling does not work in ‘Viewport’ stretch mode, only ‘2D’. At: scene/main/scene_tree.cpp:1236

The controls can be changed in the options, to feel more comfortable, and the warnings are for graphic problems of the engine, but it is irrelevant, you should not worry about that! Thanks for playing!!

haha, if it's an arcade game, it's more for memorizing attack patterns

Really great game! Absolutely cool, I will say be careful with the explosion effects and the squash and stretch cause it technically takes you out of the limitation when a full pixel is in between two. There's still time left, but I love the game!

Thank you!, I will take these details into account!