That was amazing ... I really enjoyed the first chapter and hope to enjoy the rest just as much!

As an example, browser technology changes more often than OS (usually).  Unity had to scrap their whole web player a while back.

Most game jams have some kind of theme or limitation to consider.
Major questions would be:
1. Does the game have to be made during the time of the game jam, or can it be something made earlier?
2. Does the jam have a theme?  I would assume it is space, but something like that should probably be stated.
3. Any limits on what kinds of resources we use?  I.e. a particular game engine, only assets we made ourselves, some kind of screen resolution limit etc...
4. Will there be any kind of judging or prize for winners?

Sorry, don't mean to complicate things.  But if there are none of these limits, it might also be good to state that in the description.

Oh, it looks like it's working now.  False alarm maybe...

Overall I love the idea and execution of the game mechanics.

Random thoughts I had while playing presented in no particular order ... please ignore anything that does not resonate with your vision for this game.

There was a game way back in the day called Mail Order Monsters.

I am not saying you should remake that game.  But the idea of upgrading your kaiju is something I haven't seen since then.  Sometimes drawing ideas from old games like this can be really inspiring.

Gameplay wise, it did not have a strong or compelling loop.  I enjoyed stomping around and the way destruction was accomplished, but I did not feel emotionally tied to the story.  The idea of collecting something, or getting upgrades would help a lot in this area.

One issue was that the story text disappeared fairly quickly, and I did not get a chance to read all of it.  Maybe having it pause until the player clicks a button would help.

I think any general game design ideas would work here.  Having a tough enemy that you need to fight a certain way would help with the level of challenge.

The idea of upgrades might seem weird with a giant monster.  I could see that it might not work.  But it could be done more organically.  Maybe by destroying the city's power station you could absorb electrical energy and get a lighting beam for instance, something that could cut buildings in half like Shin Godzilla?

As a fellow developer, I would also suggest focusing on the main loop a bit more before doing things like making new kaijus or enemies.  Having two static kaijus will not be much more fun (for me) than having one.  But having a monster with a more clear objective and goals along the way, with some kind of progression would be really fantastic.

Another gameplay idea is unlocking areas.  This is used in more exploration based games.  You would have to tailor it to make sense in this context.  It would not be "find the key to unlock the door to the boss room."  But maybe "destroy the power generators to disable the electric defense system, so you can reach the downtown area..." Something like that.

As mentioned Movie Monster game was also a good one.  They had one game type where the humans had captured your monster's child.  If you roared, it would respond, and give you a clue as to where they were hiding it.  Something like this would also tie our emotions to the monster, who is now defending its offspring, and not just destroying stuff.  (again, I did not get to read the full story)

I have some feedback if you want to hear it.

I have not been as excited about a Kaiju game since the Movie Monster game for Apple II.

Please go ahead, I would be honored if you did.  Thanks for asking!

I read later that you could add the weapon (or key perhaps) to the new game pack, but make it invisible and have no pickup sound.  The problem would be if they did not get the weapon, there is no if/then equation to determine whether to give it to them or not.  Anyway, yes, the engine has limits and it was certainly fun and challenging to work within them.

That sounds correct though I've never tried those things.

The annoying thing is that I could not bring something like weapons across from one game pack to another.  You do have the option to start with the first weapon or not.  But I wanted to have a small adventure in the town where you could get an extra weapon in the town.  I had to move it to the forest.  It's okay, I think it worked out ...

Thank you, you are fairly spot on.  The second and third levels are actually part of the same game file.

I honestly had a blast working on this.  Thanks for playing!

Wow, amazing!!!  I love the claymation and especially the moving train effect!

Thank you for that.  This was honestly one of the best times I've had developing a game.  The engine is so small and limited that I did not set my expectations high at all.  But as I had ideas, I just tried to see what worked and didn't.  I am glad you enjoyed it :)

I do not, but thanks!

I think it just requires a small checkmark to be placed next to the windows icon.  Otherwise the app doesn't know how to install it.

It looks like the game is not assigned as "Windows" because it is not installing through the Itch desktop app...

I saw the WASD version, that's cool!  I noticed that the mouse only effects the up/down view, but not left/right.  This makes it actually more difficult to play because you would need three hands to control mouse, WASD and arrow keys :)

Amazing!  It's really good, plays like a proper shooter :)

This looks amazing.  Can't wait to try it!

Great tool!  I have updated all my game's music :)

It's cool, I love this engine despite its limitations.  Maybe even because of them :)

Wow, crazy story :)  I got to the big boss, but he killed me pretty quickly..

It looks great!  I think the colors and sounds are fantastic.

I would try to add mouse control with WASD if possible.  It is very hard to play as is.  You can change controls in the settings.

I really like the look and feel of this.  Cool environment and weapons!

I could not find the key on the first level, and the map did not seem to work (tried f1 and tab)... I was using the windowed version.

There is a new level in the game now too...

Wonderful!  I have to update that help file :)

I am really enjoying the engine!

Oops, I figured it out.

I am new to this engine.  Just curious if there is a tutorial on how to update the images in the GameBitmaps folder, and get those in game.  They seem to be in the "game.pak" file, but I am not 100% sure.

Updating the images in the GameBitmaps folder alone does not change them in the game.

It looks like the ceiling tile is floating above the top of the walls.  I'm assuming this is just a limitation of the engine, and I will have to deal with it.  But if there is a way to fix this, that would be nice. 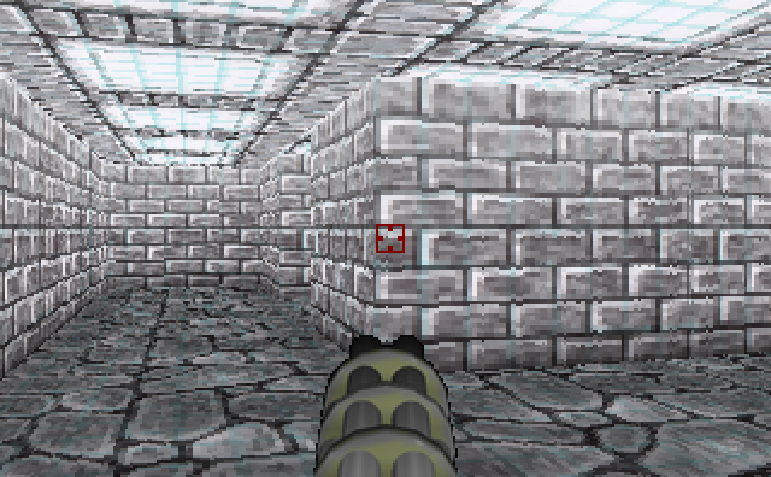