Save the drunk!
Submitted by Big Tuna & Fierce Goujons
Add to collection 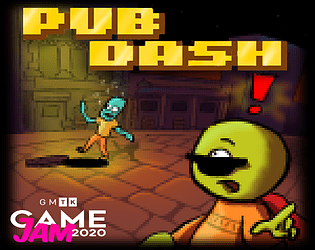 Ranked from 69 ratings. Score is adjusted from raw score by the median number of ratings per game in the jam.

How does your game fit the theme?
The theme for the GMTK Jam 2020 was "out of control" and we tried to implement it in the idea of having this crowd out of control that you somehow are trying to manage. You will be setting up the map to try and make it as safe as possible so you don't loose anyone on the way to the next pub, anything else is out of your control. Manholes, cars, fights... plenty of danger out in these streets!

Wow, very cool game concept! The art and music (should maybe be a bit quieter) are really fitting the theme. Would be cool to see a highscore table in the future and make it so that you can't press the last one into a corner forever. Well done! (I would really appreciate it, if you would check out my submission!)

Loving the concept and animations!

I'm curious did the cones do anything? I wasn't sure if the drunks would avoid them or not?

Originally they did, placing them somewhere would forbid the drunken fellas to go there!

As we mentioned a few post below,  we had a bunch of problems at release time, and the cones functionality is one of the things that was compromised! We're planning to release a fixed version after the jam, just for the sake of having it online "the way it was meant to be" before all the problems struck!

Very interesting! I can see you had a vision for the game, you just need a little more practice with the execution. Keep on creating!

I like the potential to create an emergent gameplay in your game. Keep the good work!

Good game! Would benefit from a little polish and art

Good concept - very Lemmings-like. The drunks seemed to completely ignore the cones, though. Maybe consider being able to pick up objects? Anyway, keep it up!

Good work! A little polish could help, but the animations were very cute.

And then everyone died.  The end.

The presentation could use some touch ups, I think.  The concept is good, but it could have used something a little more.   Overall, not bad.

PS: The back button on the ctrls menu doesn't work and I had to refresh the project to actually play the game.

for a moment, i thought this was mini GTA miami.

Submitted
You are now Possessed
LikeReply
Adam WattersSubmitted237 days ago(+1)

Good concept. I think the graphics could do with a bit more work but apart fro that it's not a bad game, well done.

Hey folks ! Thank you for stopping by this page and maybe trying our game :)

We had a lot of fun coming up with this (can you see we all live in Ireland? ha ha) but unfortunately we ran into some problems when it was time to export and we had to make some sacrifices. So you can't see the other two levels, the whole myriad of funny drunk characters, the cool environments and title art we had done. And some little things in navigation are a bit wonky.

We still hope you like it and can have a fun moment :)

Really cool! The design and gameplay are outstanding. Good job!

Not really sure how to keep people from dying, I tried to use the cones to cover the manholes but those would just get pushed out of the way and stuck at the top of the screen. I guess I'm mostly just lost :/

Appealing browser game, and I love your music! I liked how you linked up the "out of control" idea to the drunken pub crawl masses ;-)