huge potential right here, with excellent designs and crisp animations. i'm completely in love with anything going for this game

Maybe the level name(Taxi) could hint the solution for you.

If not, here's the solution: 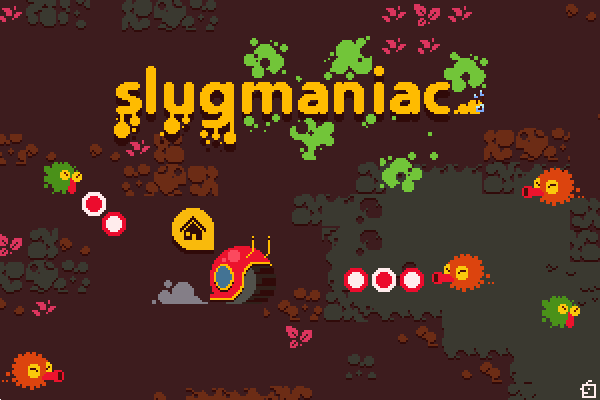 heyoo as you probebly know, this weekend was the global game jam 2019,

this year's theme was: What home means to you

SO WE MADE A GAME ABOUT  A SNAIL

you can check it here: https://lonebot.itch.io/slugmaniac

It's the old and the first version of the game,  be sure to check the full game on mobile here!

neat stuff. not sure where the "bullet hell" part is, but it's till a nice concept. my main gripe with the game is that movements are way too aggressive - the stage tilts too much and the camera shake is too strong, which made the game very hard to play or see at all.

beautiful execution! i did however feel like the gameplay didn't pose too much of a challenge - i wasn't sure what exactly i was doing until i somehow finished the game.

cute idea and art, but i found constantly dying and respawning in the same checkpoint frustrating. i feel like the movement needs to be more refined.

very nice. i think giving the guy a small shield that lets you determine the the deflection angle more precisely instead of the current surrounding sphere would've made for more intricate gameplay.

great premise! reminds me of undyne. i feel like the gameplay would've flowed better with more juice and perhaps keyboard controls and more juice. congratulations!

and yeah, we've been getting a lot of complaints about level 16, too bad we can't go in and change / delete it now. thanks for playing!!

it can't attach to metal surfaces!

haha yes, we missed last year's jam, so that reference was our small way of making up to it. glad someone noticed ;)

Fun little game!
I like how at first I was so happy being first place and two seconds later I realized this is exactly how you shouldn't play..

you can defiantly keep working on it and add some interesting tracks!

hey, i'll shine some light on the matter!

we definitely wanted the levels to have some fluctuations in the difficulty curve, exactly for the reason you've stated - as a means to keep player engagement high - 'rewarding' the player with some easy levels after a very hard one makes them feel less tense and gives a more powerful sense of progression (which are both important for jam games).

i completely agree about the hard levels though, the spike is too big. the way i'd solve this is to tone down these harder levels, make them a bit easier to solve, with hints like visual cues or a more refined room layout (level 16, which a lot of people get stuck on, would've greatly benefitted from such changes).

all in all i'm happy people are taking notice of this problem, and we'll make sure to give it more thought next time :)

GREAT idea and execution. would've loved more variety in the enemy types but for a game made in 48 hours it's fantastic.

hey, i can't start the game... will rate as soon as fixed/explained..

nice find, we'll put that in for the post-jam version!

cool game!! calling back a bunch of discs to chop things around me feels great.

we'll upload art timelapses soon so you can find out :)

such kind words!! thank you so much!!!

hahaha yes, all or nothing

oops, our bad, we'll be sure to add azerty support in the future!

Well, this has to be the most unique take on the theme thus far. Brilliant job!

it was truly a blast! good luck to everyone :D

Completely agree about the colors, will improve them along more stuff in the post-jam version

Craft, arrange and disassemble your way through a game that’s all about RPG inventory management.

Created in 72 hours for LudumDare 42. Theme: "Running out of space".

This game has high potential, love every bit of it so far,  Good luck! <3

I want to tell you excitedly that our game 'INFINIROOM' has just came out to the mobile stores :)

INFINIROOM is a unique take on the runner genre - pitting you in a single, constantly changing room.

Play as 4 different characters with individual abilities to overcome and survive the longest you can against various traps and obstacles.

Thanks so much for reading and hope you'll enjoy!

I freaking loved it back in the day! I'm still find myself humming this music ever since. Haha