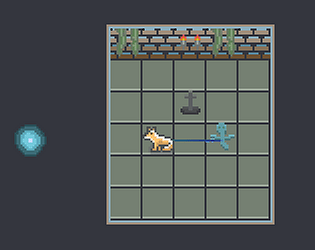 How does your game fit the theme?
You join/bind together with souls

Very cool idea, the fact that you can swap the fox and ghost around creates so much room for crazy puzzles!

The controls were a bit weird to use, but overall I had a lot of fun. Great job!

I really liked this game but got stuck on the second level haha. Nice idea, congrats for your submission!

Submitted
Hero of the Desert
LikeReply
Neat TrickSubmitted1 year ago(+1)

Extremely clever design with some sharp level layouts. A little bit of a learning curve but once it clicks, the gameplay is very satisfying. A handful of simple mechanics like these create some deviously challenging environmental puzzles, and I would be excited to see you further refine this concept. Very impressive :)

Very cool idea with the theme! I'm kinda dumb and got stuck on level 2 after getting the ghost haha.  I will try again~ Please check out mine if you have time :D

Very interesting take on the theme, I had fun playing these puzzles.  Also, nice job on the scale-animation when moving around.  One thing that I'm embarrassed to admit though:  I didn't immediately know what "orthogonal" meant -- and I majored in Math 😅

This is a really great game! I don't normally like puzzle games too much but the difficulty level was almost perfect for me! The sprite art was great and the song choice was really good. The mechanic of soul binding was really creative and fun. My only issue was that the controls seemed unnecessarily confusing but since its a puzzle game it didn't matter if I pressed the wrong key here or there so it was minimally distracting. Great job!

but once I got it and managed to complete level 2, I've got hooked by the mechanic

I think a better explanation in the level design itself could make the experience a bit more smooth to get into.
but beside that, great job with coming up with interesting idea and a great connection to the theme.

but once I got it and managed to complete level 2, I've got hooked by the mechanic

I think a better explanation in the level design itself could make the experience a bit more smooth to get into.
but beside that, great job with coming up with interesting idea and a great connection to the theme.

Nice puzzle game, I believe the experience could have been improved by adding in sound effects,

Really like the mood of this game, reflects the concept well. I found the dual control scheme a little tricky a times. Movements is nice and crisp. Good work, liked this one.

I liked this puzzle game it had quite a lot of interesting mechanics that worked well together. I think some of the earlier level design could be improved in terms of making them play a bit smoother and introducing new mechanics, but overall this was pretty good :D

Submitted
Lair of the Four Fists
LikeReply
TurncodaSubmitted1 year ago

I like the mechanic you chose to explore, and I think you explored it well with your level design. I could tell that each level built on the last one, which provides a great sense of progression. However, I think the levels could have achieved the same or better effectiveness if they were smaller and had fewer steps. One example of redundant level design was having to rotate the ghost in a 3x3 room. I know I can do it, and I've done it before, but I had to do it several times in different levels for some reason.

I might just be dumb but it took me a few minutes on my first encounter to figure out the technique for getting both the fox and the ghost past a ghost wall. I think a small level with literally just a ghost wall would have been interesting on its own, because it's a deceptively simple setup with a somewhat tricky solution. But once you know it, you know it. Figuring this out was my favorite part of the game. Here's a minimal example of what I mean:

The last few levels were hard, but not satisfying generally. I didn't feel smart after solving them, just more and more discouraged as they got more complex. I almost gave up a few times.

The last level wasn't super satisfying, which is a bummer. I didn't exactly make any insights to find the solution, it just felt like I was feeling around blindly and accidentally found the solution. The symmetry of the level kind of served as a red herring which helped to hide the solution, which is neat I suppose. I don't know how to describe it well, but it basically feels like the difficulty came from the complexity of the level and not the profundity of the mechanics. Anyway, once I got past the hard part, I instantly knew I could do the rest, but actually doing it was kind of boring.

The multiple ghost mechanic overall feels a bit contrived and unintuitive, and didn't feel fully explored. I feel like there's a lot of promising design space still left to explore with just the single ghost. Great work and I hope you decide to explore this design further.

Nice puzzle game, I believe the experience could have been improved by adding in sound effects, some control tutorials in the game so that the player can get used to the mechanics more quickly. Other than that it was very nice strolling through some challenging levels!

Game does not seem to work in Firefox, but does work as intended on Chrome.

Not sure why it doesn't run on Firefox, probably has something to do with the Godot export.

Really nice game, I was getting used to the mechanics but when you introduced the two ghosts at the same time linking, I was really surprised! I think the controls were pretty good, maybe just have an unbind button instead of pressing the opposite direction.  The puzzles were really nice and well designed -- they were challenging and felt good to solve!

definitely a nice concempt, specially the concempt of switching character and bonding with an object.

The art and sound design for the game is amazing, gameplay and puzzles are also really good

Really cool take on the linking objects theme! Really enjoyed this, spent a fair while playing it! Should release this as a mobile title so I can play it on the bus!