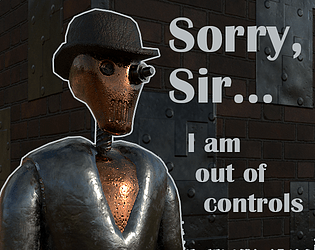 How does your game fit the theme?
Our main character is a robot who's "out of controlS", which means he has a limited amount if control inputs that the player can choose for each level.

Really clever idea and good execution. The puzzles are challenging and fun at the same time. Good job!

The was a relly nice idea for a game jam. The only things I'd improve are things people have already mentioned like the user feedback, but I'm aware how annoying things like that are to implement in only a 48 hour timeframe. Excellent concept and I enjoyed playing it one I worked out the controls!

hey there, thank you for the feedback and thanks that you were patient with our lack of explanation :D

I like the concept, but I would really appreciate some feed back for when you actually lock in your controls.

Yeah, that's missing currently. If it would have been a 49 hour jam, it would be a feature :D

Nice idea! I liked the puzzles, and the circle turning mechanic was a good idea!

It was satisfying to solve the puzzles.

I wish there were some sound effects, I also would have appreciated a way to continually move. Maybe not constant, to prevent over shooting, but maybe if I held down the button Arthur could go from tile to tile, pausing just for a second. I found tapping the buttons to be weird.

I like the little steampunk style, but I wish the background had more to it. I didn't like the blank gray background.

Also, it would be nice if

1. There was a way to remove inputs from the circle wheel during set up, instead of having to fill up all the slots and then press a button to reset it.

2. There was some sort of indicator that the level has now started.

Thanks for playing our Game and for giving your feedback!

Nice to hear that you liked the Levels. There will be more Soon !

We’re gonna work on Sound effects and Backgrounds soon and i also like the idea of an indicator for the Play- and Installing mode :D

Very cool idea, well designed puzzles, just lacks a bit of polish with the backround and the main menu, though the character looks really cool. Also wish it had a tutorial.

thanks for playing! If the jam would had been a 49 hour jam there would have been a tutorial :D

Great concept and nice levels to get the player to understand that. I wish there was a bit more juice/ sound effects etc so it didn't feel so static while planning my course, but I know it's a 48hr game I just mean if you decide to continue it!

We were 2 people and both unexperienced in sound and interface design. :D
But yes, we already decided to polish it, add all the stuff which is missing aaaaand much more levels

Really enjoyed your game! The puzzles were interesting and definitely made me think a few steps ahead. The circle with the controls in it make me feel conflicted as i understand why they are displayed like that due to the rotating control scheme pads, but not everyone always knows that WASD relate to directions they can move in, so that might be confusing a bit. Maybe using arrow keys instead of  WASD might be more accessible? Small gripe but thought i should mention it! Great job !

Thanks for your feedback! We'll definitively add a tutorial in the future. We didn't had the time during the jam. But I'm glad you liked it <3

Very interesting concept! One of the best takes on the theme I have seen. Planning my moves before every level led to an interesting gameplay. Good Job!

this is SUPER creative. these puzzles are great! great work

Submitted
And They Also Roll
LikeReply
cduraldeSubmitted1 year ago(+2)

The controls were a little tough at first, but it was a really thought provoking game! And the robot 3D model is really cool too.

If you have time, try out the game I worked on for the Jam called "Foobar". Thanks!

Very cool puzzle game idea!  It was fun planning out the controls/movement!  I subcribed to your YouTube too~ you have very awesome blender skills! Keep it up.  Please check out my game when you can~

Thanks mate, I will play your game .. just after breakfast!

Wow, the aesthetic is really great.

So far this is my favorite spin on the limited number of controls idea, really fun and easy to pick up, great puzzles.

Fun, fairly easy to understand, a tutorial would've been very helpful to understand how the enter key functionality worked. The number box wouldn't properly reset itself between levels or resets.

Thanks for your feedback :). We are already working on a tutorial and we’re going to release a fixed version after the Votings :D