Out of ReachView game page 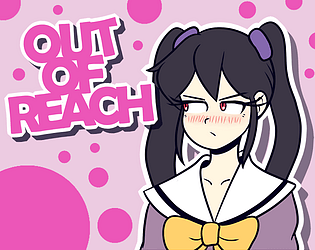 Out of Reach's itch.io page

How does your game fit the theme?
For some people, saying what they really want to say isn't as easy. You could say it's not in their control.

Hey, feel free to try out the fixed version (click on my profile to find it), as the jam submission is pretty broken lol

This was a fun game i love anime so this kinda fit well for me it was really enjoyable to try my first dating sim nice job!

One of the most hilarious and dare I say, terrifying games of the jam! First date's are always intimidating, but when everything you say makes you sound like a creepy shut in, things go from awkward to hilarious (as long as you're laughing at your unwilling host). I had a lot of fun with this game! While it didn't feel like anything you did mattered in how *bad* of an ending you got, the difference in various dialogue options and absurd responses for simple prompts was well worth it! The line about liking animals being one of the best examples. Good job!

I played through until I got to the date with the boy when this cropped up:

But up until that point, I thought this was a funny little game. You've done excellent work on the audio and visuals considering the tight time constraint. Do watch out for fitting the lines into the UI, some of them were running off the edge of the game's window.

But great work over all! Keep it up!

Yeah, all of that was a time constraint thing. We couldn't properly implement the ending so it always crashes, and by the end you're (spoiler) supposed to be dating our protagonist from the perspective of a clumsy girl. We will fix that and release a better version in a few days. Thanks for playing!

If you think about it, it is the apotheosis of your game's core thesis: the player wants to say something but the structure of the game forces the PC to say something else, undercutting the player's sense of agency and choice. Crashing the game just when the player's choices are about to pay off is the very epitome of "Out of Control."

Though I am curious -- and you may consider this if it isn't in the game -- do the player's choices in the first half have any bearing on the story in the second half?

Yea like the other comments said, I actually don't know who is speaking by the end there, and yea that crash is unavoidable is it? Still, I think the concept is there, and the presentation is decent.

The theme it's kinda a stretch if you ask me... Aside from that i really liked the art and the various conversations you can have... Definitely Good Job!!! 👍

There is still lots of improment the game can have, and definitely thing to explore, for exaple:

I just rated your great game! Thank you very much for watching the stream yesterday and for checking out my game!

The fact that you managed to have two languages is mind blowing!

With the first couple of lines I knew this will be a parody of the dating sim genre.
Very cool, although it has it's issues, I kinda interpret them as part of the theme so it didn't break the fun.
Great job!

First time I played this kind of game, but deffinetly had a lot of fun, the dialogue is great, I couldn't stop laughing at beggining. Got a little buggy at the end and then the game crashed, but still, awesome game, great execution! :D

I am curious if there's actually a way the date ends up in a success though.

this is my first dating sim, so i didnt know what was going to happend. of course, my only expectation was that the character was going to say exactly what i choosed. i was wrong. it became funny and awkward pretty fast lol. fun game :)

Very enjoyable ride, thank you.
I will say for next time your textbox design could use improvement. Although you use the ambiguity of who's speaking for comedic punchlines,  more often than not it's just confusing to determine who is actually speaking, or if the narrator is speaking in their own mind. It's a big roadblock to immersing oneself into the story.
Don't be afraid to give your characters a name. In the top right or top left corner, attach an extra textbook showing who is speaking.  If there isn't an attached textbook, then it's the narrator thinking in his head.
I like the story but I'd appreciate it if a writer went and did something beyond the typical smelly basement dweller nerd to use as a template for a guy striking out on a date. After all, if the girl experienced so many problems with this guy during the date, what even convinced her to agree to go on a date with him in the first place? The kind of things she was complaining about and chastising him for are things that can be easily apparent when you first meet someone, before a romantic proposal could ever come up. I'm sure there are many ways to explain this away, but the game never actually does so. As such, the entire scenario feels contrived.
In any case, this was still an enjoyable 10 minutes, I had some good laughs, art is very well done, and you should be proud of what you came up with.
P.S. Polka dots on the title screen? lol, too obvious

Holy crap so much feedback! I'll try to address each point individually:

Oh yeah, totally. Not only that, but sometimes it's mismatched. I had implemented an effect for when the protagonist talks to himself (just a black filter over the screen lol) but we finished the dialogue a few minutes before the deadline so we couldn't use it.

This is all great feedback and information, thank you.

Since it's kind of a parody on the dating sim genre, we thought going for the most obvious and cliché option would be fitting (that's why he starts off painfully stating he only watches anime and plays videogames). Maybe we should've made more obvious how one dimensional these characters are.

Holy cow I never expected this question to pop up. The writer (who is actually just a friend I kidnapped and forced to write for me) typed in the doc that the girl lost a bet to her group of friends, and losing of course meant going out with the nerd guy. Thanks again for the feedback, we will definitely add the explanation when we re-release it.

Thank you! I think this is what we aimed for, just giving a good time to whoever played it. It's pretty rough around the edges so I'm glad you could look past that. It's obvious that you put care into analyzing our game so I'd love to hear your opinion once we release the full version without those pesky time constraints.

Much funny. Excellent dating sim (or is it more of a parody? XD). Sucks you couldn't finish it up with a clean ending, but hey that's 48h jams for you.

A great project! Made with great care and love! Hahaha I hope that the development continues, as it has the potential to become a very solid and complete game! Congratulations!

Thank you! We will continue to work on it for a bit and release a full version after the jam ends. I hope you play it!