So close to top 10, but hey 4th plave on gameplay and theme is not bad at all. Actually, all the scores aren't bad AT ALL, i definitevly didn't expect them to be this high tbh. I'm also pretty happy with the rating distribution too, first jam where 1 star is (almost) non-existent xD

Thanks to every one who partecipated to this game (and even the one who don't) and a special thank you who played and/or rated my game, and of course to @Icoso who hosted the jam!! I'm personally really happy how this jam turned out!! (^u^)

Uhhh, i'm not a hoster so i don't know for sure if you can... Imo If you just added a build and didn't changed anything else form the Windows version i think it's fine (but i do think you have to leave the previous builds)

But again, if you really want to be sure, it's better if you ask Icoso :3

It took me a while to understand what did i have to do. Also, it isn't communicated very well when you win the level (for instance i thought that the brown tile was my goal, only because of the particles, but instead it just kills me :/). Other than that it's a really cool game!! (^D^)

One thing that i want to point out, that so far i didn't saw anyone in the comments point out is that you don't have really a reason to move, other than dodging enemies, which it doesn't happen until at later levels of the game, when the enemies become more and more stronger. Also i think that the enemies become a bit too strong each level, i had difficulty dodging them all with how many enemies were on screen :/

Really cool concept tho!! I like the Music(s) in the game!! Good Job!!

Ye, the Ground Pound to Switch it's really satisfying!! Also thank you for pointing that out, I'll have to look that up after the jam :D

Yeah, honestly I'm surprised with myself too for not seeing that sooner... I can be pretty dumb sometimes... x.x

Like many other have mentioned, platforming around is really difficult (If i have to point out why, I'd say the player is too fast and that there is no accelleration time)

Also, i'd have really liked to see the ico mechanic used a little bit more :/

Other than that, it's a really cool game, it was a ton of fun, and i really like the neon ambientation of the game!! Good Job!! (^u^)

Cool concept, when you rotate the box, the cube inside it kinda freaks out a little bit, so it makes it a bit hard to control with precision (like the game asks you to do) but it's not too bad once you get the hang of it... Good Job!!

The player need some work (especially the left/right), because as it is the game is way too hard. I can't even past level 1 :C

I like this game very much!! Once i'm getting used to one mechanic, the game introduces another one, and so the game can remain fresh for a very long time!! I'd very interested to see turn this into a full game: It has potential, man, I'll tell you... (^D^)

My only complain is that i wish there was more, but other than that good job!!

This is a really nice game, yes, but... How does it fits to the theme??

Also, the audio has some problems, but you already know that... :/

The game was awesome, the game felt very polished, the graphics vere awesome and the game was very fun, especially since this game  like to play with the players expectation A LOT!! Good Job!! One note I'd give you is that, and this is a thing that i noticed even when developing my game (Which they are similar btw, I'd love if you'd check it out :3), even if in you're game wasn't a huge deal, swapping up/down deepening on the current gravity is a big unintuitive and a bit confusing to use :/

Another note: The spikes in level 2 that moves on the conveyor belt they are a very nice and clever idea!! What's not very nice it's the unexpected block that falls in level 3, i thin you should shart with at least one block already fallen, so the player knows exactly what to expect (and not left confused on how to progress)

Sorry, I've tried to play your game, but it lags too much on my potato machine :/

(I obviously won't rate it, for fairness :P)

Hey, thank you very much for suggesting my game!! (^u^)

Hey, we have a pretty similar concept for our games!! (^u^)

Also, The game is pretty cool, the graphics are awesome and the game feels pretty polished. Like many other said the WebGL version lags pretty heavly and sometimes the game (Win and Web Verison) crashes. For your first game jam, this is an Awesome entry!! REALLY Good Job!! 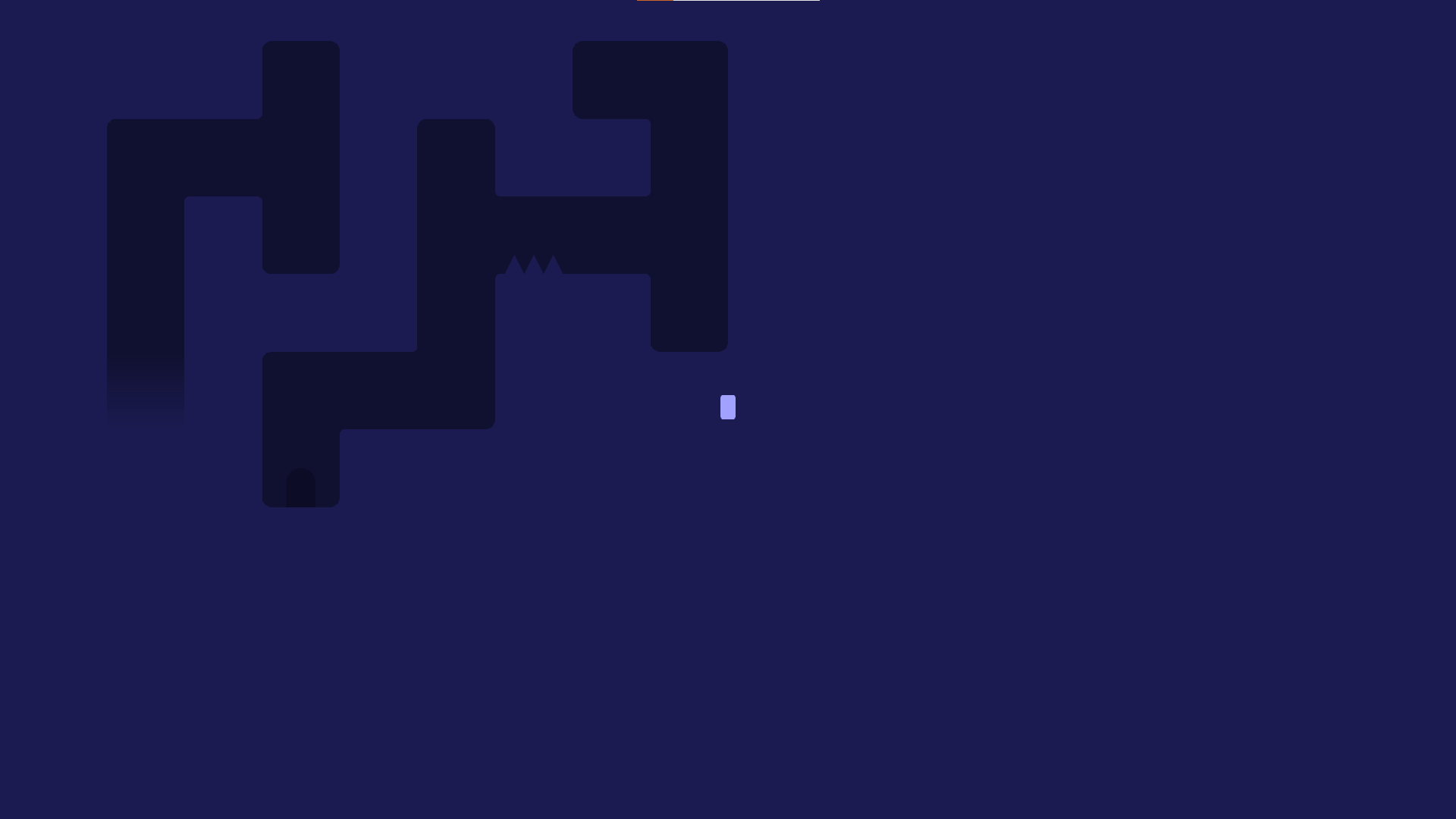 I got stuck in level 5, but form what I've played so far the game is a masterpiece, Again, Good Job!!

Ehm, you have misunterstood what i said. Sorry for explaining it poorly, my bad :/

Hope it's more clear what i meant, and i hope i have cleared the misunderstanding now. Cheers (^u^)

The ground detection is pretty bad (often resulting that i can't jump, especially at ledge) and the spike collision is pretty big, making the game pretty hard, but you still made a game so... Good Job!!

I feel pretty bad about myself, because i told you that i'd check it later but then i forgot to actually do so :P

Making hitting your shadow doing you damage was the right choice!! It gave the player challenge, while giving a twist to the genre!! (^D^)

The game is soo cool, even if it's a little bit hard to use the bat, since it's very small and projectiles usually don't go in the direction that you want :P

The bosses, and their music are REALLY Cool!! Good Job!!

There is already koyote time in the game (8 frames of buffer, to be exact) but thanks for pointing that out, they probably aren't enough (^u^)

Well, for my understanding, "losing a combo" isn't really the problem, just make that missing the beat interrupts the combo, like any other rhythm game. The thing is that whitout obstacleas you don't really have a reason to switch side/direction. Then you're only left with the difficulty problem, that i think it can be solved by adding one or more super slow chill track

Modular difficulty also sounds cool!! Too bad that you didn't had time to implement it :/

I've playied it a bit like 2 hours ago, then i left to go do some commission and forgot to rate. My bad :/

The music is really cool tho, and the game was fun, just too hard for my liking

I've tried to make the game as easy to understand as possible, but ye, i think adding an hint system would be a nice addition!! (^u^)

Ye the camera has some problems, i know that for a while now, but unfortunally i couln't easly fix it in the time i had left :/

I'm glad that you like the game and his animation!! Thank you for playing the game, and for the feedback!! =D

Ye, i figured it was because of that!! Thank You for making this game!! It was fun, both to play and to give feedback to!! (^u^)

I'm glad that you liked the game!! Thanks For Playing!!  Ye I'm sad too that the game is very short :C

It originally was like you suggested (inverted up/down controls for the upside down player), but it was really unintuitive and a lot harder to control, so i change it to the way that it is now!!

And about the walking animation... Maybe you're right, but i really like how it turned out the character, so i don't think I'll change it (^u^)

Still, Thanks for the feedback!! Really Appreciated!!(^D^)

Hey, that was actually a pretty cool concept!! Too bad it's this short, i easily see myself playing this for 20 mins straight. Good Job!! I hope you'll continue it!! (^D^)

Glad that you liked the game!! Thanks for playing!! (^u^)

Choo Choo, here it comes the feedback train (make space because this will be A LOT of feedback):

Pretty much what @Frelude already said: Isometric isn't a good fit for a platformer, and because of that (and ledge that shouldn't stop you if you're in the air, but they did anyway) every jump was hard, even the easier ones. I also struggled with grasping the directional controls.

Other than that, this is a good take on the theme, and the game was (excluding all the struggle i had) pretty fun!!

PS. Simon may be a dick now, but in the end it's just a misunderstood guy.  Try to show him some love, and know him a bit, and i'm sure it'll open up... Eventually :P

I found a bit annoying that i couldn't hit the ball without adjusting his trajectory a bit first, and also sometimes the ball didn't traveled in the trajectory that i expected to travel (that could just be me being sh*t at calculating xD)

REALLY Good Game!! It feels really polished!! Also the artstyle is amazing!! At first it seems like a normal golf game, but then you play level 2 and... BOOM, mind blowing... O.o The only thing I'd work on is the explanations and/or feedback, that they could improve a bit, but other than that this game is awesome!! Good Job!!

The only thing i'd say is that sometimes shapes spawn from all avaible spaces, and so you can't dodge them and take damage/died, and that's a bit annoying, but other than that the game is really good!!

Out of curiosity, what engine did you use?? Is it a self-made one?? :3

I had the opposite problem in my last game, so i may have exagerated a bit too much with the smoothing time this time... hehe :P

I'm glad you liked the game this much, from the concept to the level design and all!! Comments like this one always make me happy!! Thanks for the nice words!! (^u^)

Also, i know the music isn't the best. I'll try to improve my musical skills, and i'll try making better tracks in the future... :P