Submitted by feofentov — 1 hour, 17 minutes before the deadline
Add to collection 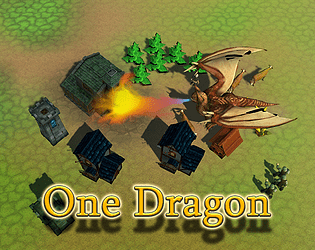 Hey good entry, it's rare to see a RTS in a 48h jam. I suggest you to add Nav Mesh Obstacle on building to help with the navigation of unit. I also suggest you to focus on less and polish more. I think a description info when you mouse over will help a lot. Keep it up it was fun.

Submitted
Only One Minute Again
LikeReply
feofentovDeveloper2 years ago(+1)

Thank you for feedback! It was the first time I work with NavMesh and buildings have NavMesh Obstacle on them, but it still works kind of bad.

Pretty cool idea, and nice basic demonstration - I didn't think it could be that cool to fight one single enemy in a stage of an RTS game, but your game shows that the idea really has potential!

Thank you for feedback! We are glad you like the idea)

Very good start! I included it in my GMTK Game Jam 2019 compilation video series, if you’d like to take a look. :)

Thank you for playing and including it in compilation!  :)

Interesting idea for a full fledged game, that's for sure!

Thanks for your kind words)

Didn't expect to see an RTS game here! That was an ambitious undertaking and you pulled it off quite well - good job! I liked the take of just fighting one target instead of another whole race or civilization, it gave the game an instant goal which is pretty important for a jam game.

Thank you for playing and feedback!)

Looks pretty cool given the short time frame! And don't worry about the bug mentioned in the forum thread from me. You have a rate anyhow!

Submitted
Only One Shall Pass
LikeReply
feofentovDeveloper2 years ago

Thanks for playing!) Will check yours as soon as I am at home.

Just wanted to give some feedback on your game since you took the time to play ours. :)

Did not expect to see a RTS game in this jam! Very bold! :D

I really like the premise for this! And I definitely see potential for a more full-fledged game.

For example, every "stage" can be a different dragon that needs to be defeated in different ways. (This dragon was a flying dragon, but what if there was a dragon that was underwater? Or burrowed underground? Maybe one that has magic shields? There are a ton of options!)

Also, a big fan of low-poly graphics, feels like I am playing a really polished N64 game. XD

Best of luck in this game jam! You and your team made a great game.

Thank you for feedback)

We definately wanted to do more but couldn't make it in time. The initial idea was to make a Dragon with random weaknesses (e.g. to fire or to poison) and give a player units with different types of damage so he/she needs to try different approaches to find a weak spot. But I like your ideas of how it can be evolved further with different types of dragons or monsters. Thanks for playing!

This has a lot of potential. This was the first RTS I've seen in the jam so that was very cool, and it gave me some serious Warcraft vibes which I am a big fan of. I especially liked playing the humans in warcraft, so the villagers and archers gave me al ot of nostalgia.

The goal of banding villagers together and slowly dealing damage to a dragon was really nice. I like the feel of small people joining forces to defeat something larger. I positioned my archers in different areas to defend all parts of the town, and eventually you can go send them to hunt it.

The dragon coming into town caught me off guard the first time. It looks really fluid and captures the feeling of a dragon well, and more importantly it makes me dislike the dragon as a player. Losing cows and peasants motivates me to train my army for revenge.

Most RTS games are about even armies fighting each other. But I like this idea of only taking down large targets. It actually feels pretty epic and rewarding. In the patched version the dragon was flying around in the ground after I got its health to 0. I WANT TO SEE ITS CORPSE

Thank you for playing and sharing your feedback! We are glad you experienced emotions we planned. Btw, Warcarft III was our main source of insipiration)

We fixed the bug with Dragon's "afterlife" and will upload it as soon as jam is over.

Good job on making this game. It took me some time to figure out how to give orders to my characters. I think I killed the dragon but he was still flying and started going in the ground (played the patched version) so I don't really know if he was dead or not.

Thanks! Yep, it is a bug and we already fixed it, but can't upload the patched version due to jam restrictions. Also there is no "You win" screen at the moment, but if Dragon's health drops to 0 you may consider yourself a winner)