One is EnoughView game page

Try to demolish the constructions with only one explosion.
Submitted by JacoboHansen — 5 hours, 56 minutes before the deadline
Add to collection 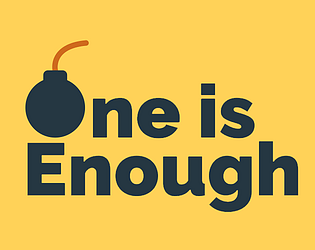 One is Enough's itch.io page

Cool game, I like the concept and the simple design fit nicely. The physics seam custom made or modified a bit, but in a good way. The music makes this game relaxing, nice experience overall.

Wow man, lots of promise with this one. Reminded me a bit of Boom Blocks for the wii haha. Super solid game, you should be proud of it

That's a really good game! Simple, relaxing, some of the later puzzles might be a little difficult but that's probably on me. Great job!

This is pretty damn cool. The look is simple, but the effects sell it. I barely noticed at first, but the screen-shake really helped to sell the weight of the explosion.

Anyway, your level progression was awesome, I particularly enjoyed how you slowly added new elements and complexity as you went and liked the twist on some levels to make you change your way of thinking and the mechanic, while simple, was satisfying for sure.

Very good job. Fits the theme perfectly, the idea and level design are also on point.

Submitted
One color. One direction. One button. One life.
LikeReply
iffalsepanicSubmitted1 year ago

This is really good!

It's a physics based game that tightly adheres to the theme and has genuinely enjoyable levels to figure out and play, so that's great design, as well.

The idea has certainly been thought of before, such as games where you draw a single line so as to accomplish a given objective on a map, but this one is done with a bomb.

It's fast and short enough that one can figure out the rules for the objects and physics well enough themselves even when they don't get overtly explained by the images.

fantastic!  A great idea for the theme, and the execution is really nice!  great work.

The levels in this game are really cool. I really want to try more if it.

It's a nice little spin-off of the Angry Birds model, jarred somewhat by weird physics and weirder music.