Platformer game, but you can't move! Game made for GMTK 2018
Submitted by Akusan (@akusan) — 1 hour, 55 minutes before the deadline
Add to collection 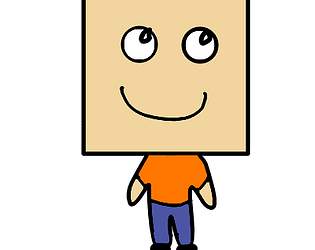 Cool concept, needs a bit more to flesh it out though. Its weird that moving the platforms up sometimes doesn't also move the block. Think it might be more intuitive if the scaling/rotating applied to a single platform rather than all, OR if you made it a single screen game that all the elements on screen would change accordingly.

thanks for the tip! I have those in mind for other levels where they could be on single screen. The scaling and rotating will also be moved to other levels or depends on the platforms.

I am still baffled with unity physics that sometimes the collider doesn't work properly.. maybe I should use a backup collider inside? Still need to figure this one out

Thanks! I am working on adding more levels!

Thanks for the feedback! Gives me some new ideas :-D

Cool idea! It's short and unpolished tho. (It is a game jam game so not much polish is expected; but this has almost none.) I enjoyed it tho!

Yes, it is actually the 1st game i worked alone in such a long time. But thanks for testing and giving feedback. I am going to work on more polish for this game and more levels :-D

Yup, i had little time to work on it. I'll make it less confusing and more levels.

For those who want to play browser version with sounds: https://akusan.itch.io/divine-intervention-post-jam

I think it's a really cool concept that needs to be utilized more. The one level doesn't really showcase any of the abilities. To me, the clicking to move the level really just felt like a stand-in for pressing a key to move the character. Especially since clicking moves the entire level, I really got the sense that I was just controlling the character in an unusual way. Meanwhile, the abilities that were actually interesting didn't really seem necessary. If you designed the levels specifically around those abilities, I think you'd have something interesting.

As was mentioned by someone else, the collision on some of the platforms is a little strange and you're able to fall through. Also, I think binding the two abilities to different keys would be a good idea. You don't really have much fine controller when trying to rotate or scale since the same thing controls both.

If you spend a little time polishing those things and playing around with level designs, I think you can come up with some really awesome scenarios for this.

thanks! That's is what I am planning to do

It's a great idea and the level has nice colors, but sometimes the player went right through the platform. The controls are kinda messy, but the concept and art are cool.

Alright twist in an overused idea, too sad that rotating/scaling is useless and there aren't that many levels.

Thanks for trying out the game. What other games had this concept?

I do like the concept, it's just that there isn't enough levels to develop the idea. Rotating/scaling isn't used at all in the one level, if there was a level where using rotation/scalation was useful, it would give the game more meaning.

Thanks for the quick response. I am planning to make more levels which is why i am  looking for more feedback. Had some more in mind but wasn't able to add it to the game for now. Thanks also for sharing these games.

I played all the games you listed. It's great to see all different ideas on the concept

I would say that the theme idea was very good but was hindered by other things that were made unnecessarily complex. It should have just been dragging the level, no rotating or scaling. The objects should have been flat 2D with much simpler collision. I think this would have helped you avoid making the game feel buggy and weird. I was engaged enough to complete it though.

Thanks for the feedback! I will keep those in mind when making more levels.

Pretty good, good potential.  Scaling the whole thing up so there are no holes is a bit of a problem but I like the idea of moving the stage not the character.

Thanks for the feedback. I will balance the later levels and take what you said in consideration.