Indie game made for GMTK Jam 2018. Bullet Hell without enemies.
Submitted by Baeldrum (@baeldrum) — 4 hours, 22 minutes before the deadline
Add to collection 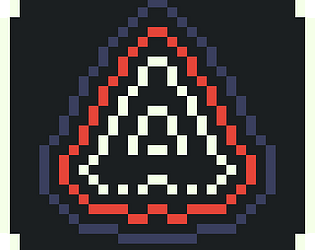 I think the concept is almost there. While you say that you're avoiding your own bullets, that's not really the case. I mean, they come out of you, but you never intend to shoot them. So, effectively, they're just like enemies from any other game.

It would have been really interesting if there was some reason to shoot (maybe you have to shoot certain objects to keep yourself alive, for example) and the player could control when to shoot. If that were the case, then a lot more strategy and risk-taking could be involved, forcing the player to make interesting choices. So, I think your game is a good start.

What if the arena becomes smaller over time and you need to shoot at the walls to make it bigger?

Bullets would disappear when I hugged the ship to the top or bottom of the screen. Using this method, I could get a score of about 250-290 before being in any actual danger of getting hit. This was the only flaw I could find in an otherwise great take on a genre without its mechanic. I look forward to seeing where this goes in the future.

Thank you for playing and for the report :D

Really fun game, it would be good if after a while you shoot diferent bullets.

Done! When the rating is over I'll release an updated version. Thanks for the idea :)

Nice concept :) I would have liked to control myself where I am shooting, so I can put some strategies in place. Maybe some levels with different shapes to experience strange boucing bullets? Well done!

Hey, thank you for playing! I like your ideas for the game :)