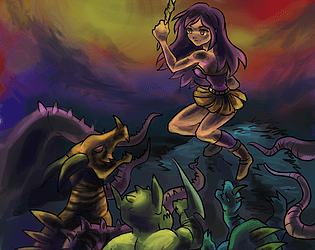 Really cool! I’m not sure whether some of the lighting was pre-baked or not, but the effect was great anyway. Surprisingly easy to navigate and understand the layout. The low resolution made it easy to fill a lot of details in with my head!

And the cover art’s awesome btw, a great homage to doom.

It's crazy to see an FPS like this on the "gameboy". It must have been challenging to make things readable and understandable using only 4 colours but I think you pulled it off well. I love the RPG elements you implemented too. Nice work.

I think this is one of the best game of the jam so far. Maybe it’s too much for the gameboy and this have occasional bugs (like when you pause the game and then turn around and some elements remains still for a bit), but it’s really awesome. Also, it’s an inspiration for the sequel of The Final Life :) Really liked the stat points mechanic, wanted to do something similar, but got scrapped :(

I'm happy that you enjoyed the game and that it served as inspiration, that means a lot

Nice little fps/rpg, great palette, solid music, all around nice job!
It was a little hard to make out where I was at times and the enemies often blended into the background but I suppose that's the tradeoff for pushing the graphics that far.

If only something like this could actually run on the Game Boy, ahah!

The visual and music is rockin' ! It's really enchanting and set up the mood a lot ! The gameplay is a bit harder to take in hand because of the few buttons available but it's part of the gameboy charm !

I really liked music and art. The color palette is amazing.

The controls and feel of the game are basically exactly how I imagined most FPS games would work on gameboy. The colour pallete is also really cool and I loved the music and the artwork. However it ends up being quite difficult to get a read on certain things since objects seem to blend into the environment. I also feel like the enemies are a little too fast for this kind of control scheme. Other than that though, it's a solid game and a solid entry

Took my brain just a bit to get into the right mode to "read" everything happening on screen. But once it did, this was quite a treat to play. Classic FPS 'tank' controls played very well here and the world was surprisingly big. I like all the little details like the signposts, the pause menu with the avatar and descriptions of everything. A very clean presentation all around -- great job.

Great game. Had a lot of fun playing it.

The art is beautiful. Everything looks insanely detailed for something running at 160 x 144 and displayed in 4 colours. But, like some people have said before, it comes at the cost of clarity. Perhaps having the enemy sprites continuously rapidly flash between colours/a dither pattern would've helped? Regardless, it is impressive.

The gameplay is very fun. The Doom-style controls are responsive, which aids in walking around enemy attacks. The staff weapon reminds me of Hexen a lot in a very positive way. Again, one of the few negatives is that it's hard to see where the enemy (and their attacks) may be, depending on their type.

There are some 3 songs. One of which is used for the game itself. Normally, that would run the risk of making it so that the song starts to grate. But that song in particular is so very good that it isn't an issue at all. Rather, I would want to listen to it outside of the game itself. Reminds me of all of those 90s games in a very positive way. Castlevania, Doom, Mega Man X, etc. There's a possible hodgepodge of influences I can hear here. Cool!

Design-wise, I like the ability to quickly respec the RPG stats at will in the pause menu. But with the right combination of stats, or the right amount of enemies killed the game can become very easy. I killed the final boss before he could even do anything. My personal opinion is that the game could've been a little bit more difficult.

There's a little story, but I think that the focus is more on the atmosphere. I really like the signs displaying the names of the places you're in and such. It adds a lot to my enjoyment of the game, and is convincingly dungeon-crawlerish.

Overall, very nice! One of my favourite games in the jam so far. Well done.

Liked the music and gameplay, felt like the graphics could've been so much better if not as much noise was used when doing the rendering. Nails the creepy vibe but I think it'd be much improved with simpler but clearer graphics.

The creepy enemies in the garden will give me nightmares, I'm sure.

Very solid game, you made an FPS work with the limited buttons of a gameboy, nice! Some enemies are a bit hard to see, that's fine. What could really use some readability is the projectiles, they all look pretty dark. Excellent music too!

The color scheme work surprisingly well and the music is really good!

Interesting visuals and game played well, maybe levelled up way too quick and made the game too easy haha. Good job!

This is an awesome game. Although its hard to see sometimes on where the enemy is, I find it part of the fun to discover ambushing enemies. Very cool color pallet choices, and a solid start for mechanics. I like the simplicity but yet fun gameplay. My only problem would be that it's hard to find where you suppose to go in the game.

It reminds me of doom and acid trip combined together, which is a pretty unique vibe to the game. Keep up the good work!

oooh I really want to play this! Any chance of a web or mac build?

I'll try to get a web version soon, i wish i could make a mac build but sadly the engine doesn't let me to do it from my current windows setup

I absolutely love the stat system! I got lost through the first level but the atmosphere and graphics more than make up for it! And Lluuvia is super cute :3