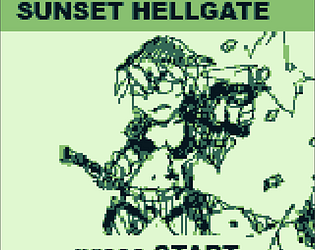 I can confirm that it does work on hardware. Game was fun, although I'm not sure what to do after upgrading the sword. The bridge appearing after killing all the enemies was cool.

At that point attack the alter the priest is praying too. Destroy that sucker haha. Glad you enjoyed i

I'm not sure if I'm doing anything wrong, but I'm unable to get past the first screen

I should have made that clear, sorry. Try attacking the dark patches on the ground  on the edges of the screen, those are door

I think this game would've benefited from being made in a game engine instead of being made for real hardware. I like the weird world building and the general vibe going on here, but a game like this is a tall order for a game jam that's only about 2 weeks, compounded by having to develop and optimize it for the GB hardware. There's slowdown in spots where it doesn't seem like there should be, the movement feels janky and weird, combat is pretty basic, and all-around, I wasn't as impressed as I felt I should be, which is a shame, because I feel like there is a neat game concept in here.

Thanks for the honesty. I was trying to kill 2 birds with 1 stone so I could enter GBCompo21 as well. It was a lot to learn and do in the short time though and I'm a post jam ghost now haha. If I keep to this project later I'll factor in your feedback :D

Really fun fast paced combat, the dodge roll is super satisfying and I'm impressed you did this in a week! Some small frustrating things like the bullets being light like the ground makes them hard to see on a Game Boy DMG, but I still had fun! The music was pretty good, but the beach waves sounds got annoying very fast. One other thing, I was able to walk on top of the UI at the bottom and dodge rolling would make it hard to enter doors. Otherwise, fantastic game, well done!

Thats a good list of things to sort out post jam verdict made. Thanks for playing, glad you enjoyed it! Lots of features I wish I had time for or tighten. Future Me's problem haha

Fun game to try, especially because it is an actual gameboy rom, combat feels good, there's a bit of exploration, at first i got stuck for a while before i realized i had to press A on the edges of the screen to move to the next area, that could be my only "complain"

I watched a few of my mates play and get stuck in the first room, so I'll make it more clear after jam ends. Thanks for the feedback!