Beyond the UnderGroundView game page

A heart-fluttering exercise in butterfly watching while trying to find out what's beyond the surface of daily life.
Submitted by pke1029, starling (@starlingoboe) — 2 days, 9 hours before the deadline
Add to collection 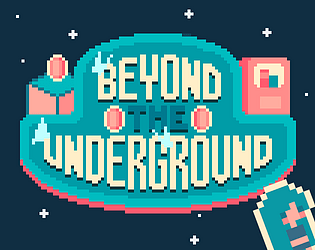 Beyond the UnderGround's itch.io page

Oh man I LOVE the background track and how much is conveyed with the audio alone. I really love the use of silence/gaps at various points and I had the game open for a while afterwards so I could listen to it. @starling, do you have that up online anywhere to listen to?

Overall really well done with this game. The visuals were great and the simple gameplay concept was a nice change.

Thank you so much! So happy to hear you liked the audio and the visuals. Here's the track on soundcloud: https://soundcloud.com/starlingoboe/beyond-the-underground

The game's nice. Camera and Player Movement was great. Art and Music, they were just awesome. The puzzle was also challenging, but not unsolvable (though it took me some time to figure out the puzzle at a point). As pointed out by one of the commenters on the game page, it would be nice to have a solid hint that player needs to collect all the coins before proceeding, otherwise people like me will continue playing 3-4 times before knowing that the puzzle is really repeating...  Otherwise amazing  work...

This was great! :D Just got round to finishing a second playthrough now (the first being pre-voting) and this is one of my favourite entries when it comes to audio and visuals. Taken in conjunction with the gameplay makes this a nice and relaxing experience. Would have been happy for it to have kept going :) Great work!

The puzzles were fun, and I liked the gameplay! The music reminded me of Terraria!

the colors and the art style are very good, and the music is amazing. I love it. Well done.

Super polished and consistent game! the colors and the artstyle is so eye-catching, and the music is amazing. A great game all around!

What a gorgeous game! The visual style is gorgeous and instantly drew me to Beyond the Underground - and it was on my list of jam games to play very early on. There is a very high level of polish here - from the start menu with an animated logo all the way to a nice credits page, it feels professional and well-made from start to finish.

The music is also lovely and matches the graphics really well! My only feedback here is that it could be a tiny bit more varied. Maybe a different track per level would mix things up a bit and show that the user is progressing?

For me personally, a couple of quality of life additions could be added. First, it was a bit jarring that the user needs to refresh the web page to reset the game - I think a "Restart" option after the credits would be a better choice. Also, I didn't know that you could continuously press the jump button to go up the bubble streams and lost a lot of time trying to make some jumps because of this. I think a pause menu with a controls screen would be a good idea here, or some dialogue about the bubbles that displays the first time the player approaches some.

Gameplay-wise, I think the addition of some obstacles would add a sense of progression to the game. Maybe in levels 2 and 3 there could be some pathways that are blocked off by doors - and the user could unlock these by exploring alternate pathways to find keys. Also, the character is working through some personal struggles in their mind - and it's great that you've used this jam to explore this type of theme - but (for me, at least) the resolution feels a little sudden. Perhaps a "boss" at the end of level 3 would make this breakthrough feel a little more earned. Defeating them could result in the "Welcome back, it's so good to see you" text being displayed. The boss could be something as simple as a darker version of the player, à la Shadow Link in the Zelda games or Badeline in Celeste - but I couldn't say what the game-play would be to defeat them 🤔

Overall, this is a fantastic little game and I know it's going to do really well. I hope you don't find this review too negative - I've actually played Beyond the Underground 4 times now and I just wanted to leave this feedback because I know this game could be on the same level as other great games that tackle mental health issues - such as the aforementioned Celeste. Well done on this excellent game and good luck!

Hello, thank you so much for your review! I agree that @pke1029 did a great job with the concept, art and programming for the game, and it's great to see someone give such thoughtful comments.

I wanted to respond to the parts of the review that I could, as the person who did the story and music. I agree that I'd like to have done one track per level if not for the time constraints of the jam - happy to hear that you agreed with this idea! I'm also blown away that you've compared it to Celeste, as I wasn't sure that the mental health aspect of it would be evident from the slightly cryptic dialogue. I'll have to keep your comments in mind for future dialogue (I agree the resolution was a little sudden and if not for a boss fight or other obstacle I think the dialogue could have led the player along to it in a more satisfying way). Thanks again for your kind review :)

Yes, I can absolutely tell that with more time this game could really be one of the greats of the genre. It's evident from the music and dialogue that we do have that you've put in a lot of thought and emotion into this.

Btw I also checked out some of your work in your showreel on Twitter and on Spotify and was blown away 🤩. I really love the track you did for Postcard Memento in particular!

Thanks again for the great experience and good luck with the ratings!

Ah so happy to hear that, thank you so much for checking out my work as well! :)

Thank you for the feedback! I agree that the gameplay is a bit lacking in depth and your points are very valid. I heard in an interview with the Hollow Knight devs in which they mentioned they keep polishing their game before adding new elements so that they can release it at any point and that idea resonated with me. I wanted to prioritize creating an enjoyable experience for the player and spent most of my time polishing right after the maze system is done. It also took me a while to experiment and fix the 3D library (and I see my main contribution to the jam to be the blend of 2D and 3D pixel art aesthetic and the movement mechanics instead of the gameplay). Celeste is also one of the games that I looked up to, and I am glad to hear that you think the visuals are up to the standard of @starling's script and that it reminded you of Celeste! Anyhow, I will keep your suggestions in mind and hope to focus more on the gameplay aspect in the future!

Oh yeah, that is definately a great design philosophy - I'll have to bear that in mind in my own work 😅. And I can totally see where you're coming from.

What you guys have created here is definately an enjoyable and memorable experience, there's no doubt about that! I look forward to seeing more of your work in the future!

I saw ths also on discord when it was in development and i love it. The art style is so nice. Great retro atmosphere!

A wonderful piece of art! The gameplay is very original and consistant; the music and SFX are awesome and the graphics are fantastic!

Congrats, for me, it's a masterpiece!

I loved the graphics and gameplay but I'll be honest, I don't know what the dialogue too much. I'm a bit of a monkey brain and didn't really think much of it. Other than that though, I loved maneuvering around the different stages, collecting each coin to place them into the vending machines. Good job on a good jam!

The graphics style and audio make for a great atmosphere and experience!

Everything about this game is very polished, from the level designs to the visual style.

Loved this game! Graphics are great, and the entire game has a very well composed atmosphere about it - everything fits in. Fun puzzles as well.

I loved this game!

Thank you for playing our game! I am flattered that our game has reached many people!

This is such a relaxing game. I played it even before the rating period started and I still think it’s one of the nicest games I played so far.

Thank you for playing (and the feedback on Discord)! We wanted to create a relaxing and dreamy experience, and I am glad that you agree.

Quite a soothing game to play. The art and audio were very charming. The gameplay is a bit repetitive for my liking, but if you're looking to just sit back and play a wholesome, chill game, this is the game for you. Good job on putting together such a polished product in only a month!

I agree the game is a bit repetitive. Initially, I kind of intended the game to be endless, but later I decided that having an ending would be rewarding to the player, so I just choose an arbitrary number of 3 loops before the game ends. I'd certainly like to expand on the gameplay if I had time! Thanks for playing our game!

Thank you! We spent a lot of time (and maybe too much time) adding little details to make the world feel alive. I hope you liked it!

I loved the atmosphere and aesthetic of this game. The music, graphics, and story all worked together to create a pleasing and peaceful game. Really impressive work!

Thank you! We wanted to break away from the adventure RPG convension where you have the stakes of losing the game and choose to focus on the player experience and creating a peaceful game! I hope you enjoyed the game.

From the moment I saw the screenshot in the discord server I could not wait to play this and was not disappointed! Incredible isometric pixel style that completley shatters 2d/3d boundaries! This game could go so so far!

Thank you for playing! We wanted to experiment with a new and different visual style for our game and we are glad that you liked it!