Battle and breed your way to the ultimate goop.
Submitted by Butterscotch Shenanigans (@bscotchshenani) — 8 hours, 20 minutes before the deadline
Add to collection 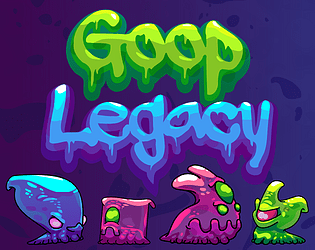 Although it’s a 2D game the art gives it a 3D feel, lots going on under the hood, fantastic work!

- I'd say balance isn't necessarily the best unless you log in and stuff. Often, I feel like the minus mutagen is just too punishing to really feel like I'm progressing.
- The goop I got was rather... not my taste :p

Aside these nitpicks, the game is superbly fun! Super good polish, everything feels nice and Juicy. The sounds and music are superb and I just love that slapping sound :D
Everything felt satisfying and I think it's the game that hooked me the most.

Very juicy and fun. Crazy well polished. The sheer number of stats is a bit confusing, I ended up just going ham on dodge chance and it worked pretty good. Nice job y'all!

Awesome good fun! Amazing it was combined it such a short time. The slap fights are hilarious. Good job!

This game is EPIC, Its CLEVER, I love the game so much that I need to split this comment up just to go into detail about its very features.

Inkscape has always worked well for your games from Crashlands to Quadropus Rampage, its nice to see you use it again and even with 72 hours you still included the juicy shading and detail.

From the ear pleasing slaps to the squishyness of the movements the audio makes me want to play endlessly in this game alone.

The main menu theme is awesome, The wasteland like world theme is interesting and the EPIC battle theme which reminds me of Pokémon is legendary.

The game is so fun despite being a little repetitive and grindy but aren't all games even the sims in a way so its really nothing.

The game was 10/10 Juicy, I could see this as an official Butterscotch Shenanigans game, imagine if this had more development, More hideously beautiful monsters, World Wide abominations using the Mix feature and the glorious but sticky cherry on top was how unique it was compared to other games you have made while still keeping the elements of previous titles

I find it really awesome when the Jam hosts join in on the fun, this has been an amazing game within a ultimately legendary Jam, I love how many people it brought together and the variety of every game, I will try and play, rate and comment on every game as my own little personal achievement and I hope more Jams like this continue into the future and beyond.

I began Game Development for many reasons, to express my creativity, to have a career doing something I enjoy, entertaining people, giving and receiving praise, seeing new Game Designer's work blossom into something great and many more reasons.

Thank you for a wonderful game that I will keep playing many times even when the jam rating session is over and thank you for giving everyone a chance to shine. Have a crazy day, have fun and good job - Michael Robinson

Love the clapping sounds and upgrade system. There seems to be an issue with display scaling as the upgrade buttons are not where they appear. After finding their invisible positions I was able to upgrade the proper stats though. Fun game. :)

Top notch! I really like the consistent feeling of progression in the mutagen / legacy mechanics.

Great work, Butterscotch. Blasted through a tonne in the weekend. Hats off.

Incredibly polished considering the development time! Very addicting, I'm not 100% sure what I am doing, but I can't seem to stop!

Submitted
Into the Void
LikeReply
Fin NolimitSubmitted4 years ago

What can I saw.... geez!  For sure the most polished Game Jam game I've ever played.  I could not figure out how to log in so after rating and giving feedback to a handful more games then I will come back to this one so I can figure it out.  Seriously guys, wow, great job!  5 stars!!

Was this for the Sticky Justice category?
Anyway, awesome game! You must have a powerful script library :D

WHOOPS! Added our theme. Thanks for the note!

Yeah, we've been making games in GM for 6 years as of Thursday, so we have... QUITE A FEW SCRIPTS.

That's a lot of years! Congrats on the Game-Makeriversary!