Game made within 48 hours for the Butterscotch ShenaniJam 2018.
Submitted by Nicolas VENTER, Nielisson, Ajoy
Add to collection 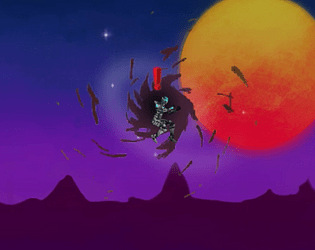 this is pretty cool and fun to play!  jumping (and double-jump) is a bit weird, some of the platforming is a bit difficult because of it.  there were a few times the enemies dropped down right next to me and immediately threw bombs (killing me) which felt a little unfair.

Those bombs can create some crazy effects! I had one stuck to my characters head and it pulled me incredible high into the air. Base concept it pretty cool!

Pretty neat visually and the bombs are a neat concept. I had some trouble with controlling my character at times, the controls just felt a bit "floaty". With a little bit of polish this could be a really compelling game! Great job overall!

- It's a bit frustrating because it's difficult to know how to deal with the enemy bombs. Sometimes, I get sucked in and lose, sometimes I don't and it was a bit confusing.
- The music isn't bad, but when you die, it starts again so it overlaps and at some point it's pretty bad on the ears >,<
- Overal, could use a bit more polish, the colissions felt a bit "floaty" and I would have liked some audio feedback on some things, like when you get sucked in a hole or when an enemy gets sucked in.

Aside that, I like the atmosphere and overal visuals, not bad!

Thanks for your reply, we will publish a polished version asap.

I really like the visuals and the music! Great job!

thanks, betray; did u participate, too?

very kind of you! thanks!

I think the song kept playing every time I died and it started a new one at the same time. I was kinda diggin it though.

The Sound overlapped for me every time I lost, but the graphics are really nice!

This is a difficult game, the amount of times the enemies stuck bombs on me are countless. The graphics are amazing however and I do like the bomb blackhole mechanic.

Thanks, I add some tips on description to help

Left click not right click to throw a bomb, but it's ok I figured it pretty quickly ;)