Sticky and the Forgotten Blade of JusticeView game page 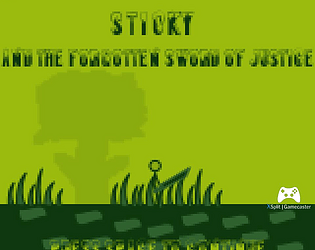 Sticky and the Forgotten Blade of Justice's itch.io page

Get OFF my sword enemies, Love this game and shish kebab'n my foes. It had good music and was fun also that flip when you jump is funny

Thanks for giving it a try and appreciate the comment! I want to revisit the core concept at some point after a few other projects; it was a fun idea.

Thank You! I didn't want to draw a flipping animation, so I just made him flip like a mad man through code...that really made some problems with collisions. Lol.

Fun little game!  I got to the Big demon looking guy.  Is the final boss?  I was not able to beat him.  There were a few glitches with the wall jump.  I found that if I just spam the jump button then my guy would at least awkwardly  get up the wall.  Also I would get this error message if I tried to leave an area without kill all the guys..  All in all I enjoyed playing your game.  I played about seven times trying to get back to that final boss before giving up. :) Nice job 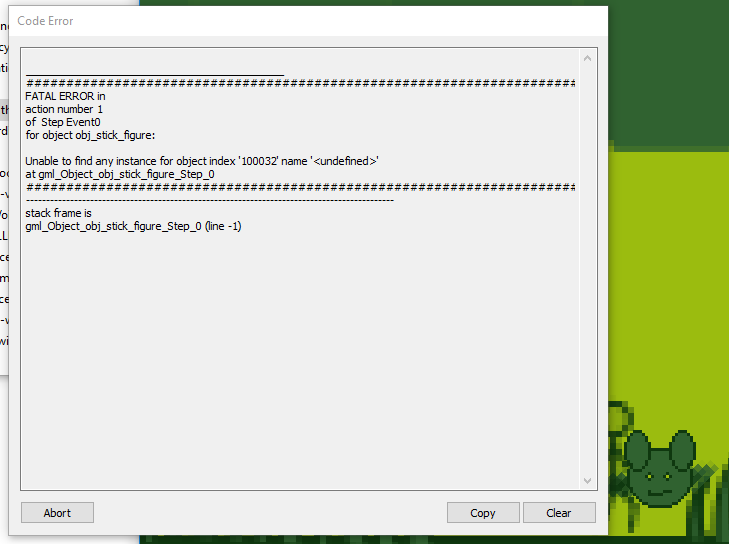 yeah, the big guy is the "boss". I wanted to keep it short. I wanted people to be able to pick him up too, because it's funny to have that large of an enemy on your sword, but because of this, if you kill all enemies other than him, you can't win. I could fix this by making a spawner to spawn more enemies if the instance count gets below a threshold, but I didn't think of that during the jam and got too worried about getting a video done.

The glitch you encountered I believe happens when you die and the game restarts, the variables aren't being reinitialized correctly, and the game is trying to find an instance of an object that doesn't exist yet. So unfortunately you have to close the game and re run if you die.

Also, the wall jump mechanic was something I never tried before, and likely would have absorbed a lot of time to get working the way I wanted, so I just said good nuff and moved on. Gives me something to work on for next time!

You ever just been so mad you want to beat a dude with another dude? Well now I have thank you for the fun game!

Thank You! I really enjoyed the premise of making this, and hopefully learned a lot for planning next time to improve my execution of my ideas!

I probably laughed to myself for a good 20 minutes when I first wrote out the description of this game. :D Thanks for the comment!

Which part are you referring to?

Its an option in gamemaker under global game settings windows/graphics. idk if you use gamemaker. Its just some of the stuff is a bit blurry.  When I see this happen with my pixelart its usually because somewhere I have left an interpolation option turned on when I resized it.

It's actually turned off. If you're referring to the blurriness, it's because I used inkscape for the art, and since everything is a low resolution, the pixels get distorted when exported to png. Probably not the best call on my part, but I'm no artist, and for some reason thought low res would make life easier. I learned that low res actually made it more difficult for me for several things. The text is also something I wasn't happy with, buuuut, once again, trying to fit the text on the screen of a resolution of 160x144 ended up making things ugly. Learned a few things though that I can definitely apply to my future challenges!

ah. I haven't messed with Inkscape much. Iv'e used illustrator but not for pixelart. Idk of anyone else who has even tried that. I usually just use  Pyxeledit, or Photoshop.

I definitely wasn't expecting that mechanic of using the sword to create a weapon with your enemies. Quite the power move!