a feast for geeseView game page

a game about talking to strangers.
Submitted by MaxMitchell, AstronotCB, Scribbibble — 2 hours, 9 minutes before the deadline
Add to collection 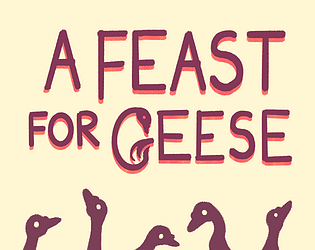 a feast for geese's itch.io page

Overall it is a decent game, but I feel it needs a bit of polish, as presently the gameplay feels a bit bland. In addition, some thematic choices weren't fully incorporated. I feel part of this may be due to the last cutscene not being finished in time, but I rated the game partially as it was uploaded to the jam.

The Gameplay is a little bit boring but guys, the game looks so good, the audio is superb and you respected the Theme. Great Job !

completely understand, gameplay can definitely be slow. but glad you still liked it! :)

Great little experience! I loved the combination of the art style, the audio/music design and the story! Well done and a clear favorite!

Submitted
The Odd One
LikeReply
MaxMitchellDeveloper100 days ago

Thank you so much! We're glad you liked it :)

Love the art, the story, the soundtrack, and the way the dialogue is rolled out and displayed. Just wish the cutscene on youtube was added in-time in because it really completes the whole thing. Fantastic!

thanks so much for playing! glad you enjoyed it :)

What a lovely game. So impressed with the art style and there is so much dialog here, impressive work. The music fits the mood perfectly. I'm curious, did you use a dialog system like Yarnspinner to implement the dialog, or did you do it from scratch?

I did not, I coded it from scratch. I wrote out the dialogue out in creately to develop the tree system/visualize the flow of dialogue (I used a flowchart template). Once I'd written the text and figured out what I wanted the characters to say, I coded a Heap which I stored the dialogue lines in, where each node's children were response(s) to a given line of dialogue. Outside of the structure I tracked whose turn it was to speak so I could just pull the top lines and put them in the right spot. I then had to put all the dialogue in by hand, adding each node to the heap manually. Not the best system, I know, but I thought about it for awhile and given the time crunch this felt the most feasible. The text effects that you then see (expanding dialogue box, colored/live typing, rich text) were all coded from scratch as well, using Unity's TextMeshPro. They were actually not too hard once I found the right part of the TMPro documentation, and are decently modular.

I've never made a dialogue system on this scale before, and given the time constraints I definitely had to cut some corners to make it work, so not the greatest code. In the future I would probably use an external dialogue system asset, or spend more time and really develop my own dialogue system that would be more modular and expandable.

This game is amazing!  It looks great and the music fits the game really, really well. The game also fits the theme very nicely. The story is great and the atmosphere is very special. I am amazed by how polished it is. The end cutscene also added some to the story. One question, how did you come up with all these philosophical thoughts, it was great. Did you find it on the internet or somewhere else, or did you come up with it yourself?

thanks so much! The script was entirely written by our programmer, Max Mitchell. It were really just growing from the “out of place” theme and this sketch one of us did of guy on a park bench with a goose.

LikeReply
Plague of MindsSubmitted102 days ago(+1)

This was an unexpected entry, but extremely well done. There is a lot of talent here, and I would want to play a full story game like this. The art is gorgeous, the story is well done, and the music accompanies this perfectly. Great job!

Thank you! We appreciate that so much!! :D

The fact that this game was made in 72 hours blows my mind. Absolutely flabbergasted! The visuals and music creates an amazing atmosphere that drags me further into the game. The dialogue is also awesome. Only thing that the game is lacking is maybe the theme part, but I would not care since it's a mindblowing game! Great job to the whole team. Happy new years :)

Thank you so much! And honestly we're pretty surprised we managed to finish in 72 hours as well.

We tried to convey the theme through our characters feeling as though they don't belong where they currently are, and are thus "out of place".

Thank you again, for all the praise, and happy new year to you too!

I had a wonderfull experience playing this game. Art, Animation and Audio are perfect. The Gameplay is very good but ussually i’m not a huge fan of these type of games, BUT i don’t give it a bad rating because of this ;)

Thank you! I'm glad you enjoyed it!

This is what happens when the goose from Untitled Goose Game gets wracked with guilt and starts making amends. Absolutely beautiful, soothing, well presented and just deeply, deeply pleasant. Loved it.

Haha, he's atoning for his wrongdoings to those peaceful townsfolk.

And thank you so much! we're very happy you enjoyed it so much! :D

You have made such a lovely game for such a little time. I really like the end scene, but its a pity it didn't end up in the game. Also, Conor did a fascinating job with the music.

Submitted
I am coming in 5 minutes
LikeReply
ScribbibbleDeveloper102 days ago

Thank you! We're very glad you enjoyed it! Yeah, it's a shame we couldn't get it to work. we'll most likely upload an updated build post-jam with it implemented though!

And I agree, Conor did  an excellent job on the music!

Thank you so much! That’s so kind of you.

THEME: Good, the player is out of place because they're new in town.

GAMEPLAY: The story is amazing but the one thing I might add is skipping because I read really quickly. I really felt like the guy was opening up.

VISUALS: The visuals were amazing!

AUDIO: The music was repetitive but not annoying the talk SFX were good but I would like some voice acting.

OVERALL: This is AMAZING!!! How was this done in 3 days.

Can you try (and review) my game?

That's a very good idea to have the capability to speed up dialogue- it would also help for anyone looking to replay it a few times to get multiple endings so they don't have to wait as long, so it might be something we try and implement later!

Thank you so much for all of the feedback!

AMAZING! the art was 5/5 the music was 5/5. the use of theme was also fantastic. The only things i would recommend is making the dialogue buttons match the rest of the art, and maybe make some of the options sound more natural. Also the ending cut scene was great!

Thank you! We definitely hear you on the dialogue buttons. We struggled with texturing them within the time limit because we didn't want strange visual artifacts popping up from sprite scaling. We're hoping to polish up the game a bit more once the jam is over, so the feedback is much appreciated!

I hear ya! I have had my fair share of annoyance with the unity ui system

Really beautiful, loved it. Feels nostalgic for some reason.

Submitted
IFOOP (I Feel out of Place)
LikeReply
ScribbibbleDeveloper102 days ago

and you never know, maybe you've talked to a goose on a park bench one time ;)

5/5 on art but i think the dialog globe visual could have been better when comparing it to the other art.

thank you! and yes we agree, with more time we would have done textured dialogue boxes with sprite masks, maybe make it look more like speech bubbles. thanks for playing :)

The ending was beautiful along with the whole game. (Help me with art, my submission "Distant Home" is just shapes with different colours.) The calm music was great, if you would add voicelines for the dialog, you could sell it for a quick buck. Great game and I loved all the endings.

thanks so much! glad you enjoyed it :)