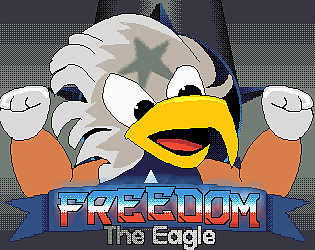 If you have implemented the modifier, how have you done so?
It's Impossible (or nearly impossible) to tell a Moose from an Elk, and even then not all Mooses are Terrorists.

Interesting story and take on Sonic! I liked the artworks / portraits! I don't know if it was intentional, but the screen was cut off in a way where the dialogue was only half readable (HTML5 version).

What browser were you using? Have you got any browser scaling on?

Firefox, and I believe the page is unscaled (though, there were page loading issues beforehand, maybe it's related?)

So fun! I included it in my compilation video series of the ‘So Bad It’s Good’ Jam, if you’d like to take a look. :)

This is one of the strongest, most complete entries I've seen in the history of this jam. Everything from the sound, story and gameplay was hilariously funny, and I loved that it had a complete world along with a tutorial even!

One one hand, it may be too good for this jam, but I think the theming, storyline and FREEDOM really makes it a great fit. I really don't have much bad to say. This was golden!

I was excited to try this game out after seeing the posts in the discord. Thankfully it did not disappoint!

I liked the satirical edge to it, which seemed to be oddly common this jam, but hey I enjoy satire so its a fat time for me. Telling apart the innocents from terrorists was a good use of the modifier and an interesting addition to the gameplay.

The gore along with the associated sound effects was a great, even if accidental, feature, really made it feel like an edgier sonic.

Sadly I didn't make it to the end of this game, I suck at side scrollers and got stuck on the first boss :(. What I did finish though I thoroughly enjoyed, and was surprised at how much effort was put into the level design, especially as someone with no level design skills.

Overall, not so much "so bad its good" as it is "its good but needs a bit more polish on aiming the guns".

LikeReply
Big The DaveDeveloper2 years ago(+1)

You'll be happy to know that there is only that boss and then then end of the game :) Thanks for playing!

Outstanding!  Definitely one of my favourites from the jam. The moose/elk dilemma is possibly the most innovative use of the modifier I've seen, and the American Dream Girl dialogue is just hilarious.  Even the really awkward controls make it really satisfying when you get the hang of it.  Great game all round!

Nice meme, I liked it!

The style of the game, and how consistent it is. It looks like an old 16-bit game though I definitely get some Flash game vibes from it as well. All in all very nice.

The satire and tone. I'm sure it's going to be very polarizing but personally I enjoyed it.

Freedom The Eagle has horrendous inertia and can't change direction quickly. Sonic was like this, but not so bad. For most of the game it's still playable but the final boss is a nightmare. This is compounded by the fact that you can't shoot straight up or down (like, say, Metal Slug) and he seems to shoot in the direction you're facing, not the direction you push the stick.

I'm kind of on the fence on this one. The premise of the game definitely leans that way, but the game itself is quite good. It has flaws, sure, but that makes it a good game with flaws, not a so bad it's good game.

It's a neat idea and there's definitely some subtext to it I'm too tired to figure out.

If you die during the final battle and respawn, American Dream Girl no longer sends supply drops.

Some of the text was cut off. I'm not sure if this is just my system or not.

A really fun little game. I think it would be better served being polished up a bit and presented as a satirical game than a so bad it's good one.

This game is amazing! I still can't tell a moose apart from an elk, so I shot them all to be sure. A+++

Hey there! This is almost too good :) I love the cute character and the music; it gives me a really nice retro-feeling that I enjoy.

It was fun to play, I liked the theme and the dialogs.