town building for the future!
Submitted by 6toad games (@FishTaod) — 4 hours, 13 minutes before the deadline
Add to collection 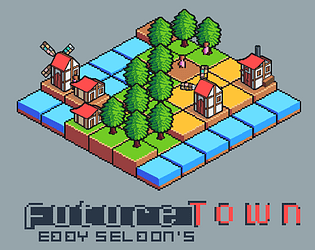 Cookies eaten
Do croissants and sablés count (we are French)?

This is a beautiful game that I had no clue how to not die immediately at haha.

Haha, well some maps are harder than others, but generally speaking, you want to start with one or two lumber yards, then a windmill, and keep building mills and houses, balancing food production and population cap. You can throw in an other lumber yard along the way if you are not building fast enough.

The presentation is amazing, the music and art really gives it a good vibe and you keep getting back to it to improve on your score.

The food gain is a bit obscure I think, I'm still not really sure how it works, but overall a really enjoyable game that I'm sure I'll keep on playing to improve on my impressive hi-score of 6.

Thanks!! This is our first jam and first published game, so it means a lot to us that you enjoyed it! :)

We'll probably tweak the mechanics a bit after the jam. At the moment, food and wood production depends on the number of ressource specific bildings (mills for food) and the number of unoccupied ressource tiles (yellow tiles for food). Depending on your map, you will need to build more or less of each production building. Meaning some maps are harder than others.

Good work on the isometric art style, I love it. The different height levels of the tiles looks great. The concept is well thought out and fits the theme really well. Great job :)

I agree, the hight levels make a difference (the devil is in the details, as they say). :)

Nice game, i really liked idea of the test of ages. This game needs more content and polish and it will be good mobile game.

Yeah, I think it could do well on mobile. Will look into it. :)

I like the art it reminds me of into the breach! Cool neat little game!

Me too. :) Although the breach was not an (conscious) inspiration for the game.

Ah, fun idea for a compact city builder! And running the simulation at the end to see if the town is sustainable is really sweet and made me go "Ohh that's pretty cool" out loud

Awesome! Thanks for your feedback!

Really intresting entry, building a town that can survive the future is a unique and interesting concept. I tried to shoot for a high score, but I could not figure out the logistics of how food works, I thought you lose food = current population, but im quite sure it doesnt work like that, I had a town with max 20 pop, and 26 food per year and still ran out of food constantly. I would reroll the town to have tons of trees and grain and get my productions really high and still lose somehow. I had a run with 9 farms all adjecent to at least a few yellow tiles and would still be losing food to a population of 15.

Reason im getting into the strats and how im not sure how they work, is because I REALLY enjoyed this entry, I like town builders and this ones concept and simple execution was really cool to me. Highest score I got was 51, but lost it when I pushed for the future bonus points. Really really cool entry imo.

Thanks so much for your message. Really glad you enjoyed our game! :)

The way ressources work at the moment, is that you get +1 at start of the game, and once you put your first building it goes as follows :

really good presentation and aesthetic :)
agree that its a little too easy to win once you realize what the buildings do.

I wish the game was longer and more complex... But I really loved the presentation, both the graphics and the music blend well together and it doesn't look like a game made in three days.

Thanks for your message!

Had fun with drawing the graphics. I feel the color palette worked out nicely in the end.

Music is by an independant artist we found on the jam's forums : https://www.filippovicarelli.com/

Wow, this is good, but unfortunately very short. A town builder is very ambitious and this definitely lacks the longevity it needs, I think taking this and making a more sandbox experience would generate you a really nice game, I found that the game is basically over if you drop down a limber mill and two windmills and from there it's smooth sailing. Maybe water based income and disasters based on adjacency so houses are more prone to fire further from water and closer to workplaces. Regardless you did a fine job with this but it really would shoot up in my eyes with more content.

I'll let you know if we expand the game in terms of content. :) I kind of like the idea of short game sessions (2-3 min max per game). I feel it definately needs to be more challenging though, to further replayability / make scoring a high score more challenging (our high is 75... you?).

It was around 60-70 I can't remember anymore but I played a few games and got it in that region so it sounds like there's a bit of room for improvement for me.

The game looks great and the music is super fun! I really like the concept, running the town into the future is a cool take on the theme. I think the game is maybe a bit too easy --- I don't feel like I have to think very hard to keep things balanced. Maybe the original building period could be a bit longer and you could scale the consumption per population non-linearly to make things trickier?

I had a lot of fun playing this game. Thanks!

Hey, thanks for your message! I'm glad you envoyed it. We enjoyed making it. :)

I agree, the mechanics need some refining.

We did play around with log-like functions (no pun intended) for wood and food production but in the end settled for something simpler. Consumption however has always been linear (1/1). I'll try ramping it up.

What helped diversify the gameplay and make it a little bit more surprising, was delaying the population response to food (population crash and reproduction). I'll try playing around a bit more with that too.

Also thinking of allowing the player to go over the population cap (which would cost you in victory points at the end, on account of homelessness...). Adds one more thing for the player to watch out for / balance out.

These are all really cool ideas! You should definitely follow up on them :D