Merge runes to make new elements, use these to your advantage in this dungeon crawler.
Submitted by VividReality — 17 minutes, 54 seconds before the deadline
Add to collection 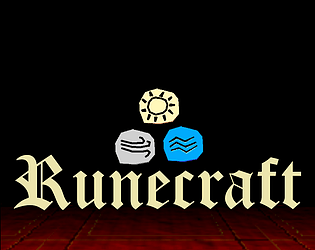 That was awesome. The gravity fed inventory was cool, and the rune combining had a really nice arcane feel to it. The atmosphere was really nice too, the music added that extra touch that made it really feel like a polished product. I also felt like you balanced the rpg vs puzzle aspect really well. Resources were fairly prevalent, so there wasn't any time when I got softlocked or anything, but I still had to think about resources management. I dunno if this was intentional, but I got flooded with a lot of life from the shopkeepers, so I was running low on air a lot, which made me tend to use the attack rune against enemies more than the other runes because I knew I could take the damage and I didn't have the runes to spare. Which was awesome, it's amazing that you managed to fit that much depth into the resource management system.

And holy shit, did you just make an old style blobber (except without the blobing of course)? That's amazing, I thought people didn't do those anymore, bar some notable exceptions.

A physics-based inventory is a very cool idea.

This is so fun! You should make the name of the rune show up when the cursor is hovered over it because I didn't know what some of them were initially.

Great job , this is really fun to play , the spell system is interesting and fun to use , kind of remind me the one in "The Keep" , but there's some problem , for exemple when a rune "fall" on your table , or when 2 rune got stuck together , or when all the rune on your "table" got fucked up and you have to organize them again.

Found a bug : if you craft the destruction run too early in the adventure and try to use it on a barricade , the game crash.

This is a known bug, but thank you for confirming. It is fixed in the post jam version, but I will not post that here until after the rating is over.

Great job! I love how you incorporate the theme into this game by making new elements with friction! Had fun trying to figure out how to make and use the rune properly.

I found a tiny bug: once you finished the story mode, you can't enter the endless mode.

Submitted
Speed It Up!
LikeReply
VividRealityDeveloper1 year ago

Thank you for letting me know of this bug! If you close the game, and run it again, it should work.

I don't know how to kill enemies :( Other than that looks quite interesting.

That is really good! I've seen a lot of alchemy-type games, but this is the first to actually do something fun and creative with the concept!

At first, I had a lot of trouble understanding the mechanics, and in fact I thought I was soft locked, but after restarting and figuring out how things work, like the weaknesses monsters have and that fire breaks doors and stuff, I really, really liked it! =D

Vivid has made a real gem here, combining old school dungeon crawlers with an awesome rune magic system. He's added a ton of polish and it makes the game feel absolutely fantastic.