Roll to score points!
Submitted by scarf goose — 2 hours, 10 minutes before the deadline
Add to collection 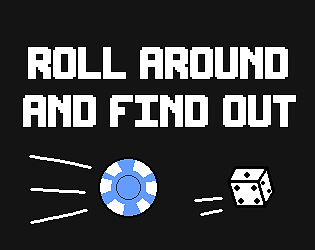 How does your game fit the theme?
You play as a dice that rolls and the result gives you points accordingly

Loved the game and the polish, good job !

Wow, this game is really fun. Cool art too. Awesome work for a game made in 2 days.

It's an interesting concept, but I think it could have been done better: The difficulty is very inconsistent as it depends on your dice rolls which don't evolve over time. Maybe the six challenges could all have had a similar difficulty, but would require to actually use the dice roll to avoid obstacles, thus exponentially adding more things to avoid on your screen.

I liked that a whole lot. It’s really easy to understand the concept, and pretty fun. Reminds me of the old flash game ‘The Impossible Game’

I really enjoyed the design of this one once I figured it out, very tough both to keep from rolling and to survive once you start! Really well made, great job!

I'm on camera trying your game here if you'd like to see, a timestamp link to your game is in the description!

This is a really intresting and engaging game, awesome job!

I love the games mechanics and they work really well, it was a bit confusing at first but after that it was really fun to play!

The roll function can feel quite inconsistent sometimes, sometimes it rolls faster than normal or doesn't roll at all! It's also really hard because of the small gameplay area.

Noted. the roll may feel faster when you do it diagonally, other than that idk how that could happen. sometimes it doesnt roll because of the cooldown so you dont spam attacks (as much). Thanks for the feedback!

really fun across the board. Pretty hard in a good way

I really enjoyed playing this game. At first I made the mistake of rolling the dice too many times back to back and dying really quickly. But after a few playthroughs I figured out what I was supposed to do. I loved the hearts on the dice showing the player's health. Great game!

Love the 4s' attack move, feel weirdly good for me. Didn't realize the heart dice was supposed to be my health, so slightly confused at first. Really juicy gameplay, I love it!

Submitted
Paint Me Something, Will You?
LikeReply
VeinsSubmitted69 days ago(+1)

Really creative take on the bullet hell genre. My only complaint is that some rounds it got too hard too fast, so there wasn't much opportunity to warm up to the movement. Otherwise, the rolling for points mechanic works really well! I also love how everything is casino-themed. Awesome game!

I loved this idea! one of the most unique takes I've seen. I'm amazed you made a new attack combo for every roll. I also love the presentation of the health. the only feedback I have is that the 6 is very hard to avoid. maybe I'm just not good enough but it seems pretty unforgiving. All around amazing job!

Thank you! and yeah the 6th move is unfair and was hard to balance, best you can do is roll to not get hit and hope you dont get a 6 again

This is a concept that I didn't expect, playing the dice and dodging casino pieces.

Submitted
Roll With It!
LikeReply