Hey I see we can learn from each other lol. I did really love the look and feel of this immediately. I might have to sit down and try it again

This game easily had my favorite aesthetic. Glad you dropped it on us!

I dragged them there and left them for the duration of the game 200 seconds, and nothing happened. lol. I am bad at game.

Well thank you for your feedback! it is definitely not bug free, but they’re hidden decently lol. And yes, getting the perfect trucks is much easier in the beginning, like in Tetris, it should be easier to plan out, however as others mentioned there’s a few time consuming/non-intuitive elements. If I have enough positive feedback I’ll spend time converting this into a proper mobile game.

I’m inclined to agree with you, rather than transition between screens, and having the extra mouse drag (moving from your current place to the green button) to set blocks I believe the winning formula for this game is simply select a block, and place it in one of three grids, before sending it off. No background transitions, no extra button press. I’ve watched a lot of people play and it feels clunky as is. I spent about 6 of the 10 days just simplifying the process. I do think this could be a fun mobile game though, so I’ll continue making it after the jam. I’ll likely lose the theme entirely, or lean very heavily into it haha. Thanks so much for your feedback. If you want to be challenged, in the beginning it’s 1 new piece per 5 seconds. each time you send a truck that goes down by .1 seconds, so if you just send like 10 empties, it’ll pick up, but the headache factor would go up.

I love it. Well rounded game, I think I would like to see more powerup info, as it seems random as it is. I’d like to strategize which ones to get when, and the other user mentioned knowing the enemy health, I’d agree that is helpful for knowing how to strategize, but I think the option to keep it less cluttered visually was also good. I enjoyed it.

I loved the whole concept, the art, and the music. I really wish doing the puzzle was more clear. I would like to know where my piece that I can move is at all times, maybe a highlight would help. I also don’t think using the arrow keys to slide the one tile and it swapping with the tile it moves to is explained very well, but I’ve understood that as the way this game is actually played. as it is, it’s very good, just some QOL changes would make it a regular in my rotation.

I posted on the main game page, but I think your build is broken maybe? I’m assuming the bell sound effect is for completing the drinks, but the game never registers a completed drink.

I love this concept so much, and the vibe, but I can’t play it! lol I shared a gif in the discord and it just doesn’t work?

I enjoyed it a lot.

Gave you my feedback! I think it’s pretty neat!

It is a very simple and addictive little game! the angry lava bois are my favorite!

It’s a very solid foundation for a game. it’s got good presentation. I couldn’t figure out what to do though. I ran around for awhile shooting fireballs and all of that felt nice. Good job. It’s also really pretty.

I played through this and had no idea what I was doing, even after reading the how to. It looks really nice though and felt polished. At some point one of the devs mentioned rolling dice as part of the game, and I literally never saw that, so I might just be inept at this one. haha. anyway, good entry.

I play a lot of Tetris. Actually, my own entry has Tetris influence. I immediately liked the idea of platforming around the blocks, but then I understood, you still have to try and clear lines, so, when I play this game, there are some key things missing that really add some stress. You can’t really control very well where the blocks come. I know they’ll fall on the dino, but not how, for example which mino of the block will land on the dino space. There’s no ability to turn either. So obviously those things are based on if it’s going to be like Tetris and needing to clear lines. If instead the game was endless, and you were just trying to stay on top of the blocks, I’d highly recommend adding some arcade variety elements, like increase speed, make the whole thing bigger to look at, and stuff like ‘bombs’ (in theme of course) and anything to focus on the platforming and arcade aspect.

I think the concept is neat and has potential. It’s missing a bit of finesse at the moment.

All around good experience. I enjoyed the concept. Very reminiscent of Pokemon Snap from the N64, and it has its own charm. Everything feels good together too. I enjoyed climbing the volcano and being around the dinos. My son watched me play this one as well, and that’s a bonus since he knew the dinos! I felt the mouse control of the camera was a bit weird but couldn’t quite put my finger on why. No jump, but of course that did add to the difficulty of scaling the volcano. Some of those dinos were hidden very well too, great work.

Thanks so much for that feedback! I actually spent most of the jam time reducing clicks! I’m glad you pointed it out too, because for players to feel good, maybe things can be simplified even further. Thank you for the compliment on the tutorial! I set out to be more than just a “read this and then play” sort of instructions. Those can be pretty boring sometimes. I am most grateful for the feedback on the music, always my strongest category for sure.

It was designed with being played on phone and tablet, however, it’s too late to upload more versions of the game. Maybe after the jam I’ll add mobile versions.

Also thank you for your comments on the end of game being too sudden. I would spend time making sure the player knows “I can’t miss any more or I lose” and then, making the end results screen for sure.

Finally, I would remove the dino walking around altogether. I initially intended to have the 3 spaces between the trucks be ‘hold’ places where you could set the pieces down for later use, but I decided against it, as such, removing walking around, and simply making the dino be where it needs to be for what’s happening will reduce clicks and reduce jarring transitions from happening all of the time.

Thanks for playing and leaving feedback.

I quite enjoyed the concept of trading, and memory. I was a fan of the graphic style and using pictures instead of words to tell me what to do. A few things I didn’t like. The controls were so simple, but still managed to not be right. A lot of times, the dino would just fly in a direction while no input was being pressed, and it actually caused the game to become unplayable at one point putting the dino in the water on the raft before he should be. Ending with more I liked, it is a simple idea pushed pretty far and I love that. It matched the theme really well! I think this game could be finished and actually put out as complete with very little tweaking.

Reply
itch.io Community » itch.io » Ideas & Feedback · Posted in NSFW Content Should Be Hidden and Not Accessible By Default
Brandon Leon Channel94 days ago

Thanks all. I guess some things aren’t tagged correctly AND my profile was set to allow NSFW (though to be honest I’m not sure how mine was set to that). I did confirm several more available on the front page from a private browsing window though (not logged into an account).

I’ll report any I see and I have unchecked the box to allow NSFW content.

Reply
itch.io Community » itch.io » Ideas & Feedback · Posted in NSFW Content Should Be Hidden and Not Accessible By Default
Brandon Leon Channel94 days ago 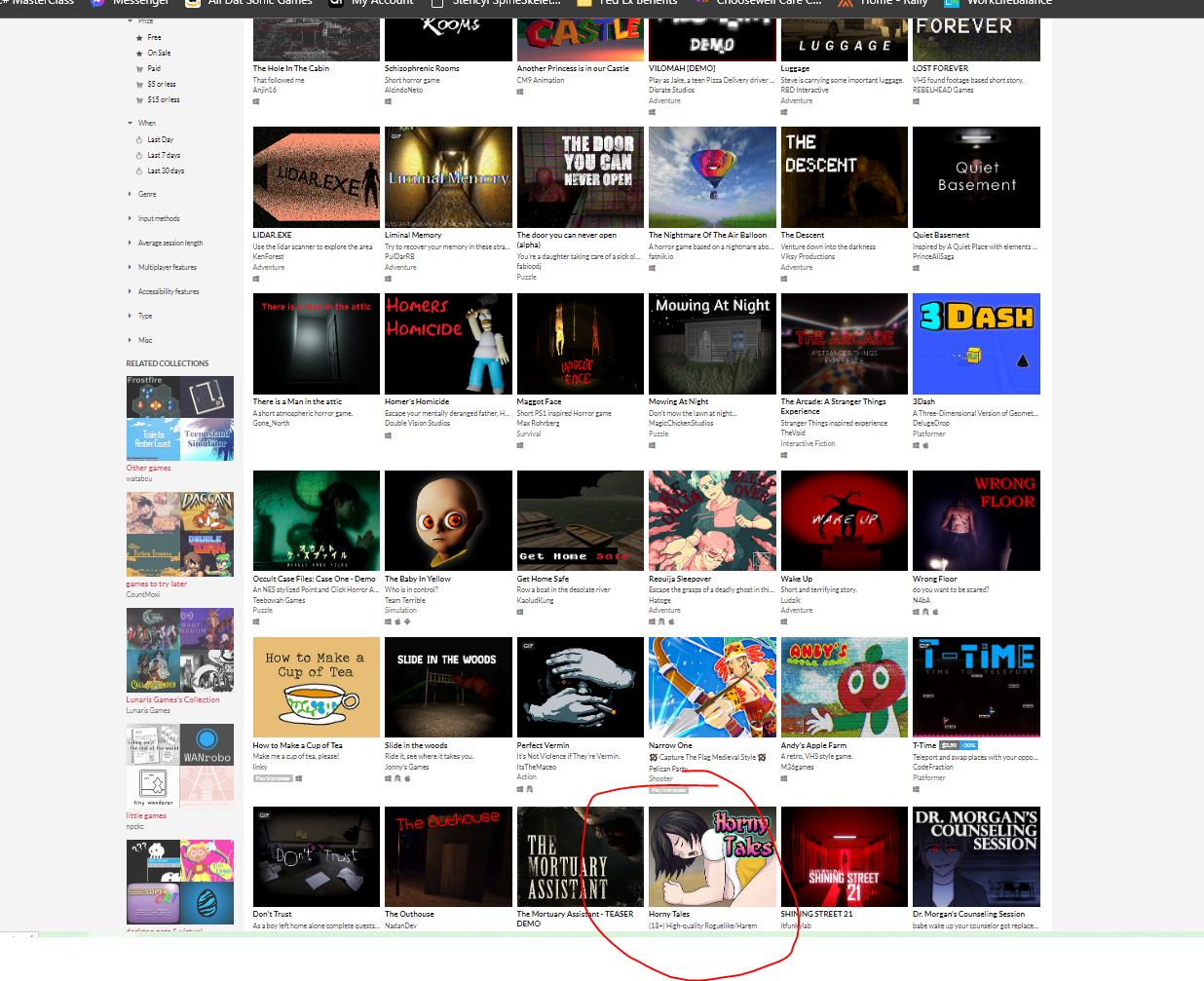 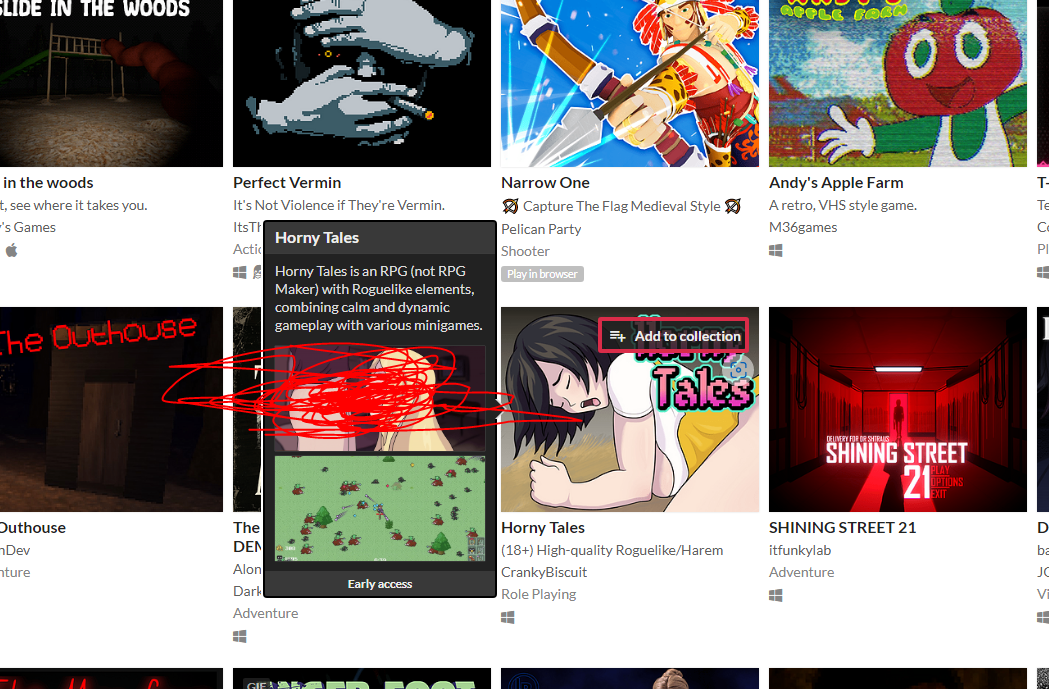 I’m searching through assets and games labeled pixel art. I have seen, with no option to not see, several NSFW games and assets. I’m not searching for them and they should be hidden by default. Otherwise this whole site needs an age verification check. I’m not interested in hearing about how the adult community might have stifled visibility, if they are adults, they can take the extra few moments to unhide that content, in order to keep the front page, and the main bulk of the site from being overrun and cluttered with it.

I did go back and fullscreen it. It makes more sense now lol.

I liked that a whole lot. It’s really easy to understand the concept, and pretty fun. Reminds me of the old flash game ‘The Impossible Game’

I pressed every key, sorry I just don’t get it.

Are there instructions? lol

I couldn’t get past the first robot thing?

I think I broke it. Music and art are cool. I did think the weird shapes on the dice’s different faces were a bit distracting, like too much going on in a small space, but I think the puzzles would be fun if there are more.

After spending some more time with it, I think I may have to try and make it so that the puzzles are tailored. The idea of maybe smaller puzzles with set dice combinations and filling it to make the answers all fit seems good.

Hey thank you for trying it out! The game was unfair because it is unfinished! Sorry about that. Here in a week when we can upload more files please try it again. You are supposed to be able to clear away rows and columns making more room and allowing for more play. When the puzzles fills the game ends.

Thank you for playing. The game was submitted but is not finished yet. Lol. The rows and columns should clear when you meet the goal provided. And then you should receive a new one. And you play until the board is filled.

I’m using the newest version of PDN from the website (4.3.10) and it doesn’t work. It also crashes the entire program when I close the plugin.

I have my image in layers, in frames with no layers, as individual images, it doesn’t work.

Thanks for the feedback. I think if I ever go back to this project I would remove the timed hopping altogether.

Hello Secret Hideout, I’ve developed a Ludum Dare game with a lot of your art from this pack. I’m planning to make it into a full release and was interested to know if you’d like to connect.

Thanks! the game is here: https://ldjam.com/events/ludum-dare/48/bundt-man

This is a super nice, fun and simple game. I enjoy it immensely. I thought it was very easy to understand and that made it just that much better.

My only complaint was making the shadows a bit more distinct since they are really important to the game. otherwise the concept was solid, execution and atmosphere were super.