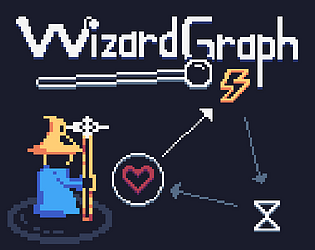 How does your game fit the theme?
Spells are connected in this Directed Graph, Turn based game. Add and remove edges as you go!

This is so clever! Definitely a unique idea and well executed. Nice job!

This idea is so brilliant yet so simple that I can't believe this is the first time I've ever played anything like it, it seems like the kind of core mechanic that has been refined and balanced over years. Everything fit together so well: the strategy of setting up your graph by adding/dropping edges, the amazing character art, the little visual flourishes like the way the graph spins a bit while you select. I can't believe this was made in a 48hr jam, and in TIC-80 no less! I am seriously in awe and also very jealous of your ability, haha!!

By the way, we played your game on our stream tonight!

Amazing game! Well done for the music, I love it it perfectly fits the atmosphere, and the drawing are superb!

It's a bit hard straight from the beginning, maybe the first mobs should have been easier to kill (or the character to have more spells quicker, I don't know).

I love these kinds of systems!  I think this could definetly be expanded into a bigger game. The presentation is really nice and the gameplay is pretty fun, good work!

The main mechanic is very interesting but I have 3 problem with it.
1. you can add any edge but only have 2 choice when remove (I don't know how the removable node is determine) and most of the time 1 choice make my graph return to previous 2 level, other choice make my graph worse. at level 42 my main graph loop look almost identical to my graph at level 6 (which only use 3 node loop "Attack-Attack-Heal").

2. there are no incentive to do big loop, small loop is much more efficient and easier to optimize.

3. player rarely have a choice in the battle, because you have to remove edge every 2 level (and I can't even choice the edge that I want to remove) it hard to make a graph with 2 out-node where both node make a useful loop, and without a choice sometime attack even sync with an enemy's defend turn and make that run unplayable.

Anyway, nice job on making the game in 2 days, I know it hard to balance the game within this time frame.

This was really great, I would love to see a more developed version of this.

I think the only two pieces of feedback I would give - firsly a lot of the playtime I spent just following the graph and it was rare I could make any meaningful choices. If the game had played through the graph for me, and only let me choose when there was a choice to be made then the battles would have been over a lot quicker, and I could have spent more time developing the graph, which is what I wanted to do more of. Secondly, it would have been interesting to see the enemy's graph ahead of time, so that I could try and design my graph to defeat theirs. That being said, that would change the nature of the game quite a bit, so ... I dunno.

I really like interesting takes on turn-based combat. So I am biased towards this game a lot. Fantastic presentation interesting level-up mechanic. Could be the core of a really good experiance.

Love the art and music! The concept is neat as well though definitely needs some fine-tuning. Ran into a couple of weird loops and modifying the spell loop after levels wasn't working. Hope to see you keep working on it!

Love this artstyle! Great and innovative mechanics, although after a while I have fallen into a vicious circle and couldn't defeat opponent. With a little more balance this would be an amazing game. Anyway, nicely done, good job! :)

Submitted
To the middle
LikeReply
GyunoSubmitted220 days ago(+1)

Interesting concept, though I found it a bit difficult to understand at first. The presentation is also very smooth.

Submitted
Geared Up
LikeReply
One Hit Combo Studio220 days ago(+1)

This is my pick for the best game! The art is great and well implemented, the theme is there, and although there could be more work on the level progression, it is yet a great game!

Cool concept, the combat system is very unique. I really like the art style for the game as well.

For the first 4 levels there didn't feel like much choice and no way to actually lose. I would suggest something like unlocking 2 things at the end of each level instead of 1 maybe, or something to allow for more choice early on.

On a side note I also ran into a few bugs that forced me to restart a few times (these things happen in game jams a lot), for 1 if you accidentally select a spell that doesn't lead any where then it could freeze and also randomly at level 2 sometimes it would freeze up completely as well and I would have to refresh the browser.

Submitted
As above, So below
LikeReply
Zomorro StudioSubmitted220 days ago(+1)

Really cool concept and really cool presentation! It is a really interesting and refreshing  turn combat system. You need to develop it when you can! It is really inspiring system! Good job!

Great music and style! I like the mechanics but I kind of wish there was an "auto" mode for actions that don't require me choosing anything.

This game implements the theme of the jam in an incredibly innovative and creative way. I can well imagine that such a combat system would work very well in a classic jrpg.

At the beginning i only had a bit of a problem understanding how the system works. But by just trying out some moves, i understood it very quickly. The combat system has so much more potential if you could add more spells. But the depth of the system is already incredible.

This is one of best games i have played so far in this jam. Please make an actual rpg out of this concept. My deepest respect on this submission. Well done!

Wow this was super interesting. The idea of picking actions in a turn-based game based on a graph like that is cool. Unfortunately I just got into a loop where I had no choice and would just cycle through 3 actions with a 4th unreachable. It would be interesting to play with the idea of adding and removing connections more frequently. Great job with the art and the music though, the overall presentation was great!

Animations are super smooth. Love the art style and the music

This is really great!

There are some problems where spells are unusable (if there is no arrow pointing into them) and can get stuck in a loop (if there's only one arrow pointing out), so maybe the player should have more control over the connections early on.

Amazing concept nonetheless, you should definitely work out the flaws and release a bigger game with this system.