You are the speaker of the parliament. Your duty is to yell at your mic to keep things under control.
Submitted by Anicet Nougaret (@AniC_dev), Tonton Antox — 15 minutes, 13 seconds before the deadline
Add to collection 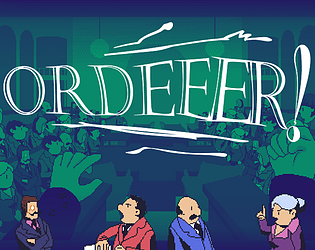 How does your game fit the theme?
You play as the speaker of the house of commons and you have to keep things under control by yelling at your mic in rythm.

John Bercow simulator with voice input, just the concept has me in stitches :P

If I could, I would give 6 stars for originality. The game's concept is great, not only for its mechanic but also for its setting - a chaotic parliament hall.
Its execution, however, didn't fare so well, though it is completely understandable due to the short amount of time you all had. My voice wasn't really captured properly at times, and I really craved for an options menu where I could tweak the amount of screaming I had to do. Something I'd also suggest is to move the "Voice" gauge to the upper half of the screen, where my eyes were focused on most of the time. I'm tempted to also suggest a lower threshold of penalty, though I'm unsure if that'd be necessary if other changes were implemented.
In any case, this game has great untapped potential - it only needs some slight adjustments to really take flight.

Thanks for the amazing feedback! I've also seen myself that putting stuff at the middle was essential, thats why you have score and chaos but since with my pc it just works sound-wise I never questioned where I should put the voice bar. But I'll do it in the first patch!

while the current build doesn't work with my fps, I can see the potential and humor of this concept and can't help but love it. Well done!

Sorry; Not rating because I couldn't play it; even with my hand cupped over my microphone it was still reading levels too loud so it was permanently in the "order" threshold. Maybe an option to adjust mic sensitivity would help?

Yes, it will receive a patch as soon as the jam finishes, I hope you'll be able to play it then :)

Haha this is bonkers!! What a cool concept. :D

Love the game! It was really challenging trying to get the yelling down, but it was great fun!

Challenging game! I included it in my GMTK Game Jam compilation video series, if you’d like to take a look. :)

I've seen it already, too bad you didn't quite get it, but very cool initiative to try every game! Keep up the good work.

Very creative and intresting concept. Awesome art :) Sadly I didn't get to play too much because I live with other people, and they weren't impressed with my order keeping skills to say the least :P
Nice entry :)

Gotta love  yelling at the screen!

Thanks for playing man :)

Thanks, keep it somewhere we are going to patch difficulty after the jam :)

When we were pitching ideas for the jam Friday night, someone suggested using the microphone as the controller for something.

The idea was rejected immediately because "there's no way we can do that in 48 hours". Turns out you're more ambitious than we are!

Very impressive stuff. And the presentation is excellent. Love the silly idea too!

Quite the talented team you have there.

Submitted
Side Effects Include:
LikeReply
Anicet NougaretDeveloper1 year ago

Thank you so much. Actually I had issues with that. I made it work in 4hrs with Godot, then I fixed a crash we had every 5 minutes or so in game which was linked to mic recording sunday morning. So it is tricky, you have to read and analyse .wav binary data and find the power formula on stack overflow

Amazing concept! I literally mounted a microphone on the computer just to play this game! one of the bests so far! rated! please take a look at my game too :D

Submitted
It's Over
LikeReply
Anicet NougaretDeveloper1 year ago(+1)

Yo that's awesome, I need to try yours too it looks neat

I liked the idea, the art style and user interface. At the beginning I was losing immediately with 0 points because I did not notice I had to start yelling at the microphone. I like the concept! My advice is to make the game easier at the beginning and then ramp up the difficulty progressively.

My maximun score was 229 points. It is quite difficult.

Thanks awesome feedback, we'll do that!

Using the microphone seems like it could easily go wrong depending on the user's setup. The game seemed to think I was yelling when I wasn't saying anything at all and I lost instantly.

Yeah its a risky move and we ran out of time for propper settings. If you want to see how it works normally there is a gameplay video in my game's page

Interesting concept, unfortunately i cannot make it work with my mic :-(

Submitted
Out of Options
LikeReply
Anicet NougaretDeveloper1 year ago

Yea it takes the first mic it founds, so if you have too many it may not work

does it work with webcam mic?

Hilarious concept, wish it was a bit easier though.

Submitted
Zone of No Control
LikeReply
Anicet NougaretDeveloper1 year ago

Thanks :) We will definitely patch the difficulty as soon as we can

This game is so promising - really hilarious and clever idea, great first person 2d perspective art. But the game was super unforgiving, but I think that is because of the high frame rate we had. Nice work!

Thank you so much. Indeed it's based on fps (oopsie). We will release a patch later.

I love the idea of this game, the concept + art is great and it is easily the funniest game I've seen so far! I did have trouble with the mic input not registering though. The only other thing is that I think you exported the project in debug mode (hence it opening a terminal when you run the game).