I am BulletView game page

A unique game where YOU ARE THE BULLET! There is only one bullet, but luckily, Agent .47 is a very smart one.
Submitted by Storm Coder — 1 hour, 15 minutes before the deadline
Add to collection 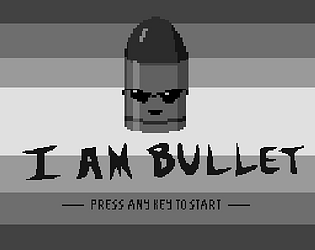 I am Bullet's itch.io page

I love the interpretation of the theme. The soundtrack and visuals are nice too, god job!

Hilarious and unique take on the theme! one of the higher ratings for sure! Great job!

Thank you very much! I am really honored :D!

Really enjoy the concept, it is quite original. It would cool if there is a easier way to escape when someone spotted one, or maybe make it easier to spot the enemy coming. I like how you added a few reference to other games like hitman, enter the gungeon. Maybe adding different kinds of weapon or enemy would be a good idea too. And maybe the bullet can be used to break a object or trigger a button, the possibility is endless! The monochrome graphic fits this stealth game very well, great job!

Thank you very much, knox! Glad you enjoyed the game and the references :D. My first idea would be to add more enemies and weapons, but using the bullet to break objects or trigger buttons is a really cool idea, it would also fit the game very well.

I LOVE limping gun (made stealth so funny) and Hitman reference/parody. Great blend of strategy and action in appropriately short levels. Could have been more variety of enemies such as sniper for extra strategy.

I played, rated and gave feedback-commented your game, please, do the same for mine. My game is mix of narrative based with top down shooter and has profound ideas about life (if you reach the end). Use left mouse button to shoot and arrows to move. Remember to collect power ups. https://itch.io/jam/gmtk-2019/rate/461368

Submitted
Only one can survive
LikeReply
Storm CoderDeveloper2 years ago(+1)

Thank you! Very happy that you liked it! More variety of enemies would definitely be the way to go in case I have the chance to work more on the game in the future, snipers would be pretty fun! Also, rated and commented your game aswell ;)

GREAT game i like the idea of this game it's hard to get away from the bad guys. But i love the idea!

Thank you very much! Really glad you liked :D!

Fun game. Its a bit hard to get away from someone who spotted you, but the satisfying shooting makes up for it :)

Glad you enjoyed! Yeah, it is a bit too hard to get away when spotted, hope to fix it soon. Thanks a lot for taking your time to review the game!

Really fun one, the lights tend to bug a bit and controlling the gun is really slow but shooting is juicy and the system is fair and enjoyable.

It sticks to the theme being a game with only one bullet but spins it to be that you are the only bullet instead of other games where you control a character with 1 ammo.

Thank you a lot for the review and the valuable feedback:D! Really glad you enjoyed.

Mm... why does Agent 47 sound so familiar. Anyway an interesting game, but it could of use better indications that you took over someone, and its almost impossible to escape the enemy once they have you in there sights.

Hahaha, no idea where this name might have come from... You have made some good points,  I'll hopefully fix those issues in the near future. And thank you very much for leaving a review, I hope you had fun with the game!

Great originality and adherence to the Only One theme. Very funny to play too. Very nice story, sound track and sound.  Add to  that, thatit's  the only (one) game you can control a bullet, the "only one bullet"! I think this should be the name of the game... ;-)

Very nice! Plenty of "one bullet" games out there, but not ones where you actually are the bullet, so nice take on it!

Thank you, Barldon! I was aiming to make something unique with a simple ideia :D

This game is fantastic, I think it might be my favorite in the jam so far!

The premise is absolutely brilliant, and it works so well with the theme of the jam. Not only was it hilarious but it also brought out some really interesting mechanics. I love how taking control over a gun is safer than taking over a human but it is also much slower giving you a variety of gameplay options. I love you can jump in a  gun and fire yourself to cross the whole level in one go.

The opening dialogue gave me a good hearty chuckle and the music was a great touch. It is totally a spy song whilst still being it's own thing.

I started out using the keyboard and found it a bit hard to control but it was much better once I switched to controller.

If I had to give some feedback I might say that the level designs could play into the mechanics a bit more? Perhaps some long hallways for you to shoot yourself down, etc.

Overall killer game, thank you for making it!

Wow, your comment really made my day, thank you very much! Some long hallways would definitely be a great idea, time was a little short on the level design side xD

Thank you very much! Really glad you liked :D