Octopus demon must complete witch's task else he won't get dinner
Submitted by Red Salmon, Gabiszon (@Gabiszon_Cyn) — 1 hour, 47 minutes before the deadline
Add to collection 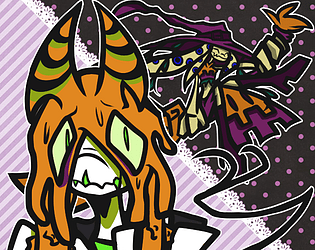 It was a cool idea!

Don't have much to add that wasn't already said in the previous comments but I encourage you to pick it up and finish what you had in mind!

Submitted
The only NeOne
LikeReply
Red SalmonDeveloper242 days ago

Thank you for the words of encouragement man. We'll definitely pick up the game again soon!

There is potential here. The mechanic to match the theme isn't there with the single combat in the prototype. I can see how it would be interesting to ration the different spells and combos you have.

The UI leaves a bit to be desired. I wish there was a list of spells I already picked, or some marker on the already existing buttons. I could also pick duplicate spells (e.g. Scald + several copies of Ashes). Is that intentional? For some reason I had to click on spells that were marked as passive.

Shame it was incomplete for the jam, this could be a solid game!

First off I must say that I really appreciate the extensive feedback. The double picking is unintentional. We found out about it like 4 hours before the deadline. The second bug is also on my radar.

As for the UI, this was my initial idea for it.  The available spells in one list and the selected ones in the second list. For the game to work with 7 monsters we initially concluded that we'd have to design 35 spells minimum for the first level (since the pool will be 5 spells less every level) but we were sort of doomed from the start since the scope was so big. The final version of the UI 'works' but overwhelms the players at first sight. So since you brought it up, what do you think of my idea for the improved UI? Would some other aproach be better?

Thanks for playing our game! Hope you try it again when we re-release it.

Yeah, that version of the UI would work better. Although if you intend to have that many spells it would be a bit overwhelming, especially on early levels. Perhaps if you unlock more spells as you go along?

Yes! That was precisely the plan we were going with. If we were making the game without a stringent deadline the game would have 40 base spells with 3 unlocked after each battle. Ideas for the 'spell rewards' include:

Not sure which option would be best.

Apart from that it's a good prototype for sure !
The art is really really nice.
With some polish and VFX when using skills, it can be a great turn based game.

Spells balancing will be the hardest part I think. You will have to make challenging enemies beatable with a particular "deck type" but also allow crazy one to let players express their creativity.

Good submission ! Hope you will continue it ! :)

After all the feedback our game got, we definitely will continue work on the game. Designing the other six monsters would be the priority. Spell balancing will definitely be hard but honestly it's one of the things I'm personally looking forward to. It would be really nice to have spells that have some tradeoffs or some that are unique to the game's mechanics. I'm curious to see how the final product would look myself.

(And I'll definitely check out your game)

Nice art, I love the character designs. The game itself was confusing since I had many spells but I had no idea what kind of monster I was gonna fight and what are their strengths and weaknesses. However, I realized I only just needed to pick spells that are compatible with each other. It was fun to think how the spells augment each other and see it in action. Some visual feedback for spells would also be nice (I know that a jam deadline is too tight to add these kinds of polish). Overall, It was fun and I hope to fight the 6 remaining Primordials one day. Nice work.

Glad to hear you're as eager to play against the other 6 primordials as we are.

Some details about the monsters will definitely be added to the coming versions of the game and perhaps we also should look at redesigning the UI again so that the players don't feel overwhelmed at first sight. Thank you for your precious feedback and thank you for playing.

I love the twist on the turn-based battle, turning it into more of a puzzle. It always feels good to put a clever combo together! It's a shame the prototype doesn't really showcase the idea that you can only use a spell once... but the one turn aspect is still enough to carry it.

My only suggestion would be a bit more information in the UI - it feels a bit cheeky (oh no, Mark's rubbing off on me) not to tell the player what the monster will do on its turn when it can kill you in one turn if you don't prepare properly - and it was tough to remember which spell did what in the battle screen.

I really really appreciate the elaborate feedback. When we first thought about making a one turn kill game, the problem was that each battle could end up being the same, making the game boring and grindy. We had to figure out a way to make the decisions more interesting. Then we decided to make multiple spells and have the gameplay be similar to something like 'Slay the Spire' with spell synergies etc. This created more interesting decision making to the game but did not solve the problem of having each battle be the same. That's how we arrived at the final mechanic of having the spells be one time use. It was apt that the process of selecting the spells was as 'tense' (if it can be called that) as being killed by a giant primordial in one turn.

Though, I must admit the final product fell short of our aim by quite a bit. I will work on the UI a great bit. Have received multiple suggestions about what could use improvement. I hope you'll try out the next iteration of our game when it comes out.

I really like the idea of spell selection,  art is amazing!

Thank you for the kind words.

Beautiful art!! Music was a bit too loud, I can see this idea being exploded a bit more. You'll have to pick really vareful. Maybe some info about the monster before fighting will help you pick better. Great job!

The feature you suggested seems like it would greatly complement the game. I'll be sure to add it when we improve the game further down the road.

The game icon is really catchy (art as well). But the game in its current form isn't good. Unfortunately you've made only one enemy which kind of sabotages your idea. The abilities could have kept descriptions even while in battle. The text in the main menu is hard to read.

Really appreciate the constructive criticism! We do plan on improving the game later and when we do we'll definitely keep your points in mind. We scoped too big for a 48 hour game jam and we were left with 40% of the work still left to do. (These are just empty excuses now)

Good luck with your future projects. And just one more opinion: I think the basic idea has a potential flaw, which is that you can't really tell what abilities you'll need before going into a battle, so it's more of a lucky guess.

Great concept that actually got me thinking while fighting the Hydra, With more Enemies and Juice this could be a great Game

Glad to hear that you found it interesting. The hope was that with more bosses the player will second guess each spell he takes into battle.

I really like the concept. Jam version doesn't quite do it justice, but if you ever decide to expand upon it in the future I think it has the potential to be a pretty solid game.

Thank you very much for the encouraging words. The real interesting choices for the game would be trying to beat the level with weaker abilities and save the good abilities for the harder levels. We'll add more bosses soon!