There's only one enemy... How bad could it really be?
Submitted by tedski999 — 1 hour, 57 minutes before the deadline
Add to collection 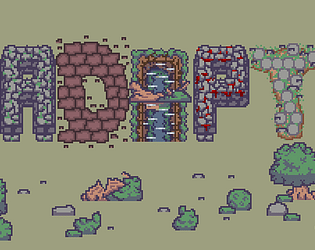 So it seems others were able to go look for weapons, i wonder how since i was moving so slow i could at the furthest get to see a bow before diying, rolling did nothing but an animation, spamming the enemy with bare fist would in some condition, kind of block the attacks ? as long as i wasn't moving nor that i stopped spamming i wouldn't get killed.

Now the graphics are really cool, though you should keep in mind that this is a game jam about game design, hence judging gameplay way more than musics, sound effects (which by the way kill the audio when i spam), or visual style (except if any of those are part of the gameplay of course).

Problem here for me is that i can't even try any weapons as reaching them is impossible, i can't run away from the monster as he runs way faster than me, can't hit it though he would kill with great ease. Tested on both chrome and firefox, both were the same i just couldn't move more than 6 tiles before ending up dead. Got only one thing to do : keep dying (maybe that's the plot twist and nobody saw it coming).

The zoomed out approach really makes the world feel large and searching for weapons was very fun. Wish there was a bit more substance to the enemy and a way to know If I was damaging it or not. Otherwise, a cool game with solid graphics! Kudos!

Nice idea, okay execution. I really enjoyed searching for weapons, but it never really felt like they made a difference. There are a lot of options, but you don't really have a reason to look for all of them. I think some sort of achievement system and some small puzzles would help this game a lot. But good work overall.

Submitted
Her only Home
LikeReply
feofentovSubmitted2 years ago

Judging by the title I've been waiting for some enemy adaptation mechanics to weapons player use, but apparently there is no such thing. Killed him with pistol twice. Nevertheless, good luck!

Nice and original idea, but the gameplay isn't that great. As mentioned before, the indicator of doing any actual damage is needed and more stages of the enemy would've also been great. The artstyle is good and with little more polish, it could've been memorable.

Cool game, as others noted some feedback on whether or not you're actually damaging the enemy would help make it a bit easier.

Great job! The game is super fun, I'm guessing your take on the theme was only one enemy. It felt tough! maybe you can add more stages of the same enemy. I mean, you don't really kill it it justs morphs and moves to different area of the map that is now available to explore. It'll be cool to see this idea explored a bit more!

I feel as though this'd be a lot more fun if the enemy somehow changed states. I'd also enjoy better communication, it was hard to tell whether I had picked up a weapon or not. This game was pretty enjoyable though, impressive art and solid controls.

Very solid. I actually had a decent amount of fun exploring to find different weapons but there definitely is a lack of information. I'd love to know when im dealing damage and more clear sprites for the weapons would help me differentiate what is what. Overall great job though!

Holly Molly nice game, nice way to implement the topic and the best of all  so fucking nice art.  10/10

I love the colours and the art. It was a little brutal though. The monster doesn't give you any openings and you have to stop to pick up a weapon by which time you are dead. Even running and rolling makes little difference, he's just on top of you instantly. It could be because I'm playing in browser