A platformer where you can't stop jumping.
Submitted by mparl — 26 minutes, 15 seconds before the deadline
Add to collection 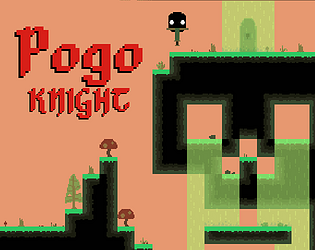 Ranked from 52 ratings. Score is adjusted from raw score by the median number of ratings per game in the jam.

Well done! Very visually pleasing and the mechanic is interesting. A bit of music would've helped it feel more cohesive.

Very well executed! Only thing I will say is I would have appreciated some checkpoints in the levels as it did get tricky.

this game is very smart and very well executed I loved the idea the art all of it.

You can go check out my entry it will be nice if you rated and left feedback.

Pretty beautiful game given the 48 hours window of the jam. The idea is great (very similar of the game my team submitted, in both games you can't stop doing one of the core mechanics). The levels are well designed and fun to play.

If I had to say something bad, sometimes the game feels slow. It isn't slow per se, but when you die and have to repeat some easy or empty segments several times it gets slow. Also some music could help with this.

Thank you! Yeah I agree I wish I had time to add some nice little tunes. I'll be sure to check out your submission later : )

Lol you went kind of the opposite of me and my submission.  I love it though, well executed.

Submitted
The Birth of Blobby
LikeReply
left shart3 years ago

Such a fun game. Really simple idea and gameplay but level design adds so much depth and makes it really challenging and rewarding. Currently stuck on level 4 but determined to complete it!

Also if the lack of music is a problem, I find that the Westworld soundtrack on youtube makes a good accompaniment.

By far my favourite entry.

Cool idea and a great execution of it.

The art style gives off a pretty creepy, lonely, sad, melancholy vibe which contrasts nicely with the expected joy of riding a pogo stick. Also the little trees and the smile at the end are a little injection of happiness.

Your level design was interesting and seemed well thought out for the most part. You made use of the fact that you pogo up AND down so there are hazards whether you are jumping or landing which is really taking the design space of the forced pogo stick all the way. The levels themselves were a bit too hard, however. This was mostly due to how long they were. I would figure out how to beat the first jump after a try or two, then make it to the next challenge, then fail and have to retry the first challenge again. So the game was a series of corpse drags where you have to beat the whole level just to try again at the last jump (the spikes on the roof of the second level took me forever). I would have preferred if the levels were basically cut in half and you just had twice as many levels. I think that would have been about the right amount of time per level. Something like that or having checkpoints in the levels would be handy. Or just if the first levels were basically one screen, then the last 1-2 levels were as long as they are now. I'm okay with trying a 10 seconds section 100 times, but retrying a 30 second section before the 10 second section 100 times gets a bit taxing.

Thank you very much for the detailed feedback, I really appreciate it. Checkpoints would definitely be something I could add if I return to this game!

Really nice game. Controls feel very good and the art style is very well executed. This bouncing animation is really satisying. Level Design had some great ideas too. For some reason I missed some sounds or music, to help convey this feeling how bounciness.

Thanks for the lovely feedback! I totally get what you mean could do with a really satisfying boing

Even if the idea might seem simple, the game from the art to the gameplay is really good.
However, I couldn't finish the last level, it was too hard for me... haha
Anyway, great job!

Pretty neat idea! Could use some sound effects tho.

The last level's one enemy placement was a bit annoying, but but I liked the concept besides that.

Nice concept, and the solid controls really sell it. The difficulty curve is maybe a bit steep, but not insurmountable, as I was able to beat all 4 levels. A minor annoyance is that I had to switch to the mouse to restart every time I died. I wish I could've just pressed R or Enter or Any Key to do so. But again, that's just a minor annoyance.

Pressing R to restart is a great idea and I'll definitely add that if I ever return to this game. Thank you very much for the feedback!

Good concept and designing. The jumps are high and fun and the pogoer is cute and easy to control. Besides from some wonky hitboxes my only complain is the level design. The first 2 levels are really easy and the second 2 are cheap and hard. The problem with the second 2 is that the jumps are really controlling and too low so you keep hitting the roof

Thank you for the feedback I really appreciate it. I agree that difficulty steps up too much and would love to add some more intermediate levels if I ever return to this game

thanks I know designing a game in 2 days can be hard, my suggestion if you go back to it would be to not make levels that limit your jump height with ceilings but make it more about getting a large enough jump and landing on other platforms

Really good concept and execution. This game is not just about jumping and platforms, it is about rhythm and patience. It is a little bit imprecise when it comes to collision, but it is just a minor complaint. The different levels really exploit the core mechanic of the game.

Good job, my favorite so far.

Thank you I'm glad to here you enjoyed it! If I ever return to this game the collisions will definitely be the first thing I fix

I love you art, the game looks great. And the jumping is very smooth. Level 2 with the spikes on the roof is a massive difficulty ramp and felt like it needed to be pixel perfect to perform.

Submitted
Without a Tower
LikeReply
Team ElfoSubmitted3 years ago

Submitted
Escape from the Asylum
LikeReply
the desperate3 years ago

It's a cool game. I really liked the fact you could goto the left from the beginning of the level, nstead of going to the right straight away.