Without a TowerView game page 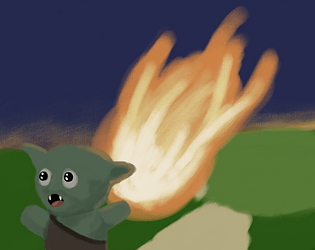 Without a Tower's itch.io page

I liked the graphics and the music gave the game some personality. My mouse got a workout too! However, the gameplay is pretty simple and get repetitive quickly. While you don't have the towers, other parts of a tower defense game would be a good addition, such as upgrades and different attack types (bombs, slowing effects, big attack with long cool down). Obviously that's all stuff that would be easier with more than 48 hours though!

For this game as it is, maybe fewer enemies with higher health would be a more interesting challenge? As others have said, your attacks are strong enough that you can just focus on a choke point and kill the goblins faster than they can escape your aim. If your enemies had higher health, you would have to attack them throughout their travel along the path, meaning you would be forced to prioritize which enemies you attack more.

Nice little game! Could really do with different enemy types to add more variation to the different waves, and holding left click down to build up a more powerful blast could be a way to deal with more poweful enemies.

Cool concept, and great music! I think if there were multiple abilities that had different effectiveness on different types of enemies, and the abilities had cooldowns so you couldn't just spamclick, it would have a lot more strategic depth :)

Nice art and music, and simple but satisfying gameplay. A bit easy when you realize the most effective strategy is to just rapidfire click the choke points when they get all bunched up, though. Maybe that could've been solved by having multiple paths they could take so you'd have to manage multiple threats from different directions, and increasing their speed and/or health as the game progresses instead of just their numbers. Good job.

Good concept. Would be better if you could make more strategic choices though, like if the fireball left a flame pit for a couple of seconds so you have to figure out how to best place them for maximum damage.

You could also use the density of the goblins to your advantage, maybe by having the fire spread to nearby goblins. Then you wouldn't have to click as much to still do damage.

Thank you for the feedback! I built a framework that allowed for multiple spells, which was the intention. If I do a post-jam I'll be adding them. I had planned a lightning spell that would do AOE damage over time and a rock barrier that would make them stop to break it.

Pretty well done, a little bit too easy but quite interresting