A fast paced multiplayer shooter set on the moon
Submitted by dolanmiu, BarthaBRW — 28 minutes, 1 second before the deadline
Add to collection 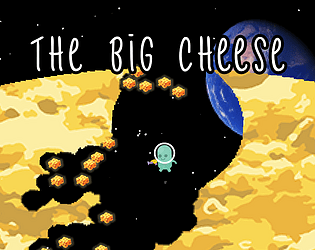 Theme interpretation
This game is a fast paced multiplayer shooter set on the moon.
It is technically ambitious, as not only we created a client with a custom pixel based physics engine for destructible terrain, but also a sharded back-end server for online play across multiple regions around the world.
It also uses GitHub Actions to automatically test, and deploy the game client and backend servers upon new commit to the main branch.

Amazing job for making a multiplayer game the Jam, it looks really fun to play with friends.

Quite bold to make a multiplayer game like that for a game jam !

The goal is quite confusing at first but it's pretty fun to play with other players, good job :D

Game's really ambitious. Making an online multiplayer game for a jam is incredible! And it even has destructible terrain!
Gameplay-wise though it's a bit boring. There should be some indicators when you hit someone (or get hit yourself), cause the only way you know it happened is with the cheese drop. Aslo, the goal isn't immediately clear and people don't tend to find each other often enough for combat. Bombs are really tiny and hard to see and the green cheese is hard to avoid.
Overall, a really good job. I commend your hard work. However, it doesn't quite fulfill its "fast-paced gameplay" promise yet.
But maybe that's a matter of the number of players (I played with 3 other only).

This is a really unique take on a multiplayer shooter. Reminds me a bit of Dig Dug and similar arcade games.

Maybe technically ambitious but sort of pointless multiplayer game when no one else is playing. I mined straight down until reaching the green core, and then I died. After this I tried walking on the giant cheese/moon but eventually got bored since nothing happened.  Still a nice start of something.

yeah I get what you mean. Thanks for the constructive criticism. We assumed that it would be easy to get players, harder than we thought! I suppose it’s the same reason why most of these “agar.io” games die out

It is a very stressful game. The only issue I had was that my fried was much better than me so I couldn't enjoy haha. It's a very good game, nice work.

Tried it with a friend and it was as stressful as it was fun :D However, I couldn't really differentiate between the green cheese and the yellow since i'm color blind so picking up cheese was always a bit of a gamble haha

Sorry about that we didn't even consider it. Hope you enjoyed it, though! :)

Cool concept! Feel like having the bulk of gameplay being shooting the ground can't be too deep but it seems cool. Nice

Yeah, the fun part is playing with friends and make them sink in the lava while losing all of their points! :) We should meet and play in a certain time ;)

Very nice ! I play alone but I think it's very cool with friens !

The fun part is definitely playing with friends or others :)

Wow! Multiplayer! I managed to play with a couple of people and it was a pretty interesting concept. You kinda pick the cheese that you lost from getting hit right back up, so shooting people didn't work that well, but it was still interesting how the whole battlefield changes as you play. This is cool!

The destructible moon is impressive, now I just need some people to help me dig.

For some reason I can't put in a "z" in the name.  It's a fun concept and always impressive when people manage to get multiplayer running. The movement is a bit janky, with gravity being insanley high. I am also, apparently, very bad at digging for cheese.

Wow, did not notice, thanks for the bug report. Will fix!

I carved through a lot of cheese! nice game :)

Well done.  I wasn't expecting to find multi-player games here.  I would have liked to see how it played with more than one player. :)

Submitted
Lumi and the Dark Night
LikeReply
dolanmiuDeveloper1 year ago

Art and animation are very cute! I wish there were people online playing this when I got on but I got to explore the mechanics on my own. Love the jump/hover animation. I did notice that I was still able to fire bullets when I was out of ammo, could be a small bug?

Thanks Yasmeen. It reloads constantly so if you keep pressing the left mouse button it will shoot just a little slower, on purpose.

it remind me of Wallace and gromit. You know the first one where they go to the moon haha

haha, yes I can see the resemblance