Submitted by VSI Studio (@vsistudio) — 11 hours, 48 minutes before the deadline
Add to collection 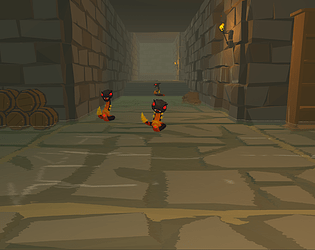 Great typing mechanics, overall liked the game very much! Despite art being from asset store, everything looks very consistent throughout the game.

A bit buggy though: my first run was ended when I mistakenly adjusted camera angle and was unable to see the word to type. But that's to be expected, general quality for the gamejam game is very good.

Thank you for playing and the feedback! Yeah, I fixed that camera angle thing in the post-jam patch, heh, that one's rather gamebreaking

As someone who has logged quite a large number of hours into the Textorcist and even frequently replays its boss rush, I feel uniquely qualified to critique this game. I enjoyed it, but there were more than a few bugs and design choices that became quite frustrating to me over time. I'll start with the bugs.

Well, those are my thoughts on what can be improved. Like I said, I enjoyed it, I love typing games and a typing dungeon crawler is a super fun idea. Anyway, happy typing!

Thanks a lot! I will definitely consider adding combos and a different punishment method to the system, I quite like that. I must admit I did not play the Textorcist and have little experience with typing games (I just thought it was a cool mechanic for a jam, heh. So lacking in design here). I really appreciate the feedback, it really helps.

I've fixed some of the bugs you mentioned and waiting for post-jam to release one bugfix version and then I'll make another update with better mechanics. (And yes, I need to start the monsters off in combat with cooldown, rather than having them always strike first).

Damn, I can´t move either. The keyboard I use right now does not have a num pad, so I can´t test that. I really wanted to look at this one. But as others already said, if it does not yet, this should use typing for everything but movement. Maybe even typing of some hidden stuff or action, so it would feel a bit like a text adventure dungeon crawler.

Typing was a little slow on my computer. I assume that is because it is old and has weak graphics capability, It would be nice to set a low screen resolution. Gameplaywise I think everyone has already mentioned the issues. Good work on what you have.

î like the typing mechanic! I wish you used it everywhere because it felt a bit awkward to have to remove my hands from the keyboard in order to use my mouse to level up. good job tho!

Thank you for playing! I will definitely streamline the experience and add typing to everything. I just didn't have the time to properly test all the elements and had to compromise.

Hey! Super cool entry! After my first death on the second floor and realizing that I could not proceed further, since I had no potions left and was to weak for the wolves. I started my second run using dying as a game mechanic. I would clear floor one but leave one enemy alive, thereby level up and buy a lot of potions. Then i would let the last enemy kill me and start over until i could not get more EXP to level up on this floor (I never reached the 3000EXP but i was close). Prepared like that I entered the 2nd floor with 40HP, 20 Mana, 18 mana pots and 2 health pots. This time I made it straight throzgh this level but sadly I did not reach the 3000 EXP since the second floor has a lower combined enemy/exp sum. So I bought more potions and went on to the 3rd floor where i defeated the boss ^^. It took be a hand full of deaths on the first floor to get to 2500 EXP and sum up 4 (or 5?) upgrades so I dealt 13 damage per hit and had 40HP in the end.

Overall a fun experience and lovely to look at!

What did I love:

What can be improved?

Overall: A super cool entry and I played for about an hour. So really good work here. One or two things to polish after the jam, but in the current state a really fun experience!

Submitted
The Gift of Fire
LikeReply
VSI StudioDeveloper286 days ago(+1)

Thank you so much for playing through all the game, it means a lot to me!

Definitely a lot of things for me to address. I did little to no QA on it and it shows. There SHOULD'VE been a "Congrats!" screen after the dragon is killed but something seems to have borked on it. I am going to make a post-jam patch to address a lot of these issues so that this might be a full (albeit short) experience.

LikeReply
The Grumpy GameDevSubmitted287 days ago

i was surprised that I didn't have to type "lever" or "pull" or "switch" or something in order to flip the lever.

Thank you for playing the game! Yeah, I should've done that with the levers too...I didn't have the time to properly make all things in the game work with typing, despite making the typing system independent and very easy to add in to everything...

Submitted
It Came from the Forest
LikeReply
VSI StudioDeveloper286 days ago

Thank you very much for playing and the feedback!

I don't know why, but I can't move at all in the game, neither by clicking with the mouse on the movement keys nor by pressing on the num block keys or arrow keys on my keyboard.

Submitted
Incursion of the Night
LikeReply
RebelloSubmitted286 days ago

We just had the same problem. We could type in healing but not move anywhere or do anything else. It would be nice to play the game properly before we review it.

This is very weird and I currently don't know what causes this. I'll try to find a solution for this problem as soon as I manage to reproduce the situation and investigate :(

Really sorry this happened to you folks.

The typing combat is super fun, but man once I got to wolves they were just kicking my ass, and I seemed to run into a bug where the 2nd wolf on the 2nd floor killed me after they died (Like I took delayed damage or something, it happened a few times)

Music is awesome, I like that there is a different tile set between levels. It's all very polished for a jam game, and fun to play.

I'm probably going to come back and play more of this and try get a build that will get past level 2.

Thank you for taking the time to play through the game! Yeah, I did very little to no balancing and didn't account for how fast people might type, that is a post-jam thing to do for me, heh

Spelling combined with dungeons is a nice twist of the theme. Nice graphics for UI as well as environment. Overall very nice graphics in the game, and the tween when moving is fluent. Nice eerie sound environment. Minimap was nice but not very useful when only showing 1-2 rooms away.

Since dying on second floor resets second floor I were not able to get further since I couldn't replenish potions and my typing is to slow. Had to restart game and gather lots of potions from first level by dying after buying.

I had trouble playing the game to begin with but I kept trying until I got the hang of it. It went from being a not so fun experience to an actually fun game to play. I Enjoyed playing it. Took me 1h 15min to reach what I think might be the end.

Somethings I noticed while playing the game that might help you in your further development of the game. You prob know most of them already.

Having to use mouse to loot and right hand on numpads to move makes it awkward to use typing for attacks.

Close to the first level shop there is a door that you can pass through without opening.

If looking down when encounter the option to look up again with num5 doesn't work ending up not seeing the text to type.

While in shop its possible to rotate  and do movement which is kinda executed when shop is closed.

At my third try movement stopped working in the first hallway and my inputs were visible in a input box in the lower right corner. While this were opened I couldn't move. I guess its something that's for testing purposes?

XP and gold seems to reset when moving to next level as well as dying.

Some torches on level 2 was floating in the air.

The store at lev 3 is doesn't register mouse, had to turn while facing it to open the shop window.

Lava monsters animations look same when alive and dead which is a bit confusing.
I stopped playing after killing the Red Dragon. Not sure if there was more content.

Thanks for making this game!

Thank you very much for taking the time to play through all of this and especially for the thorough bug reports and QA. I knew of some of these but had no time to patch them but I had no idea about a lot (had very little time to test). I'll definitely work on a patch next week for post-jam.

It all means a lot to me, thank you again!

The game works pretty well, I like the choice of upgrade at level up especially.

Submitted
Incursion of the Night
LikeReply
VSI StudioDeveloper286 days ago

Thanks a lot for playing! I hope you enjoyed it!