Submitted by lomikstik, nishi — 1 hour, 3 minutes before the deadline
Add to collection 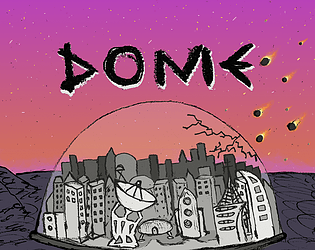 Super Nice Game! I liked the apocalyptic art style and feel to the game. The music had a real effect on the mood of the game too and the idea and use of the theme is really cool and unlike other games I've played. I would've liked a way to go full screen though but good job for a game that has been made in one week it is surprisingly content heavy.

Thanks for the feedback! Full screen was intentionally disabled, as I had made everything for one resolution (1024x768), and there wasn't enough time to make everything scale properly.

well shit your game deserves more ratings than ours, good job!! If you dont expand on this you are commiting a crime against yourself!!!

Man, would hate to live in a dome, let alone a cracked one...

Even if the art seems hastily put together it gives a very appropriate feeling to the whole thing, it works!

Oh cmon, that was fenomenal!

I really loved that game from the very beginning when you have to play pong and then suddenly you get brought into the plot. Great visual novel that is designed perfectly so I didn't get bored at any part. Most of jam games were lying in almost everything, while playing yours I had to be really cautious to consider what is a lie and what is not, so it was really entertaining.

Also graphics are amazing, I really like the mood and your style. Voices are really nicely made and they are creepy at times (like they should). There might be more variety of music, but it was really cool anyway.

I love the graphics and the story.

Neat concept.  I had a hard time navigating through it, and didn't understand what I was doing have the time.  It could just be user error though lol!  I thought the art was well done, and I liked the random brick game that was on the floor.  I really wanted to play the brick game, but I couldn't figure it out either lol!  Hope you'll check us out as well!  https://itch.io/jam/cgj/rate/476728

Submitted
The Race: A Track of Lies!
LikeReply
lomikstikDeveloper1 year ago

Yeah, it sounds like something went wrong. But thanks for the feedback!

What a great game! Definitely got the fallout vibes from it lol I can tell a TON of work went into this for just the week great job.

Thank you so much! And yes, playing so much Fallout has definitely affected the way we make our games :D

This game is pretty similar to mine :)

Submitted
PAL is your friend
LikeReply
in Principle GamesSubmitted1 year ago

A solid, pretty decently written point and click adventure. I didn't personally like the silly responses avialable, like "yes, x, but give me some booze", but generally speaking diaogue flowed well and was rather well written. I did feel immersed in the story. Art helped as well. Very distinctive in style, effective at conveying squalor and consistent. Not necessarily pretty, mind, but I think this helped the atmosphere.

Many story based games make the mistake of clearly telling you that you got ending 5 / 8 or something of that nature. This game is much more subtle. It summarises your choices at the end from the perspective of the antagonists. That both reminds me of my choices and validates my experience, without highlighting that there is more content to find. In essence, the game accepts and elevates my own story, as if it was the only story. Very good to make the game feel personal, in my opinion.

Audio was serviceable. I didn't notice anything off, which is pretty high praise, because in these games you want music and SFX to accompany the story, not take center stage.

The theme isn't really there. One could argue that Kronos, because it's a console with a game on it is "the game" that's lying, but I think that's stretching it. Kronos is just a character who happens to be deceptive. So are the aliens. In other words, this is a game about lying, it's not that the game is a liar itself.

Thank you so much for the feedback, it means a lot!

Thought the whole game would be in green text. But I was greeted with an amazing art style!

I loved the game art and enjoyed playing it. Wish it was a little longer though.

This was a cool adventure - but I admit I first thought it was all going to be in the computer terminal at the start, haha! Which would have been cool, too - but I am glad there was a full adventure after being unfrozen!

We are so happy to hear you enjoyed our game! Thanks for the nice comment!

Amazing artwork, very atmospheric music, i did breack the game though as I figured out you can use the left and right arrow keys to switch between scenes while i was searching for a better way to move the camera than moving the mouse to the left or right border.

Submitted
The Virus Within
LikeReply
lomikstikDeveloper1 year ago

I don't think I understood the story quite, but still I liked the amazing artwork and music.

Well, this is getting a 5 in theme and innovation, and also in all the other categories! Well done! Loved it!