​You were given a simple task - to get to the center of the galaxy...
Submitted by M.P.Oleksenko — 21 hours, 5 minutes before the deadline
Add to collection 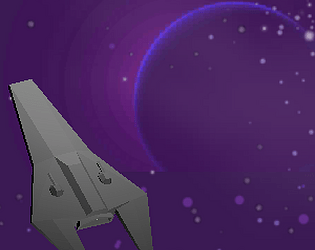 In what way does your game fit the theme?
I can't say that the game fully meets the theme. But the reason why I am submitting the game is described in the description of the game.

Did you write most of the code yourself and made all the assets from scratch?
All code made by my self. Models, sprites and music from Unity asset store and Itch.io

It's a great game for android, to be your first game is a good game ^^

It didn't feet the theme but the game was good and i was impressed with the controls, and also don't upload .aab because you can't install .aab on android only .apk

It's a good game although I didn't know how to move first as it's not explained. The only thing that I don't really like is that you can't move your spaceship completely to the left or right edge of the  your phone. I'm not that goid at this game as my highscore is only 51 I think :)

I like the control its a nice game, but like everyone said it doent fit the theme

The game is good, although it does not fit the theme. Try to make something with the theme next time, thats where the craziest, funniest ideas come from. (also, try to make a computer windows / MAC  version when you upload a game to the gamejam, thats the most comfortable platform to play your game most of the time)

It's a nice game. As all the rest said, doesn't fit the rewind theme. But congratulations anyway for finish and publishing it!
Gonna play some more round before rating.

I tried the version from the Play store.

It's a very simple game and like the idea that you could use either touch or the accelerometer to move the ship. That said, for further improvements, is there a reason to have such a huge score bar? I got to around 100 score and even that took a while. Seeing 00000000100 is a little deflating, and if there is a way to hugely gain points later on, then the beginning gameplay does not mean much.

I would suggest polishing the game some more before adding adds to it. Going to 5 score and then having to watch an add is pretty annoying.

It has potential to be a good casual game to play once in a while, but it doesn't really fit the theme of this game jam. Nice job!

Thanks for the review! My own score ~1700, and there are really only few ways to get points (avoiding of asteroids and catching yellow capsules). But right now I work for creating more ways to get them and adding new mechanics for more various gameplay for every ship.

I work hard and create new content ones-twice for weak, so soon there are will be a lot of new content for it.

As you said, it does not fit the theme.
Besides that, it is well made and challenging but not unfair.

Nice simple game with simple controls, it has some good challenge. I don't see how the game fits the theme though, other than the description itself.

Thanks for letting me play it!

The game isn't really in theme, and it feels a bit hard to control, but it's ok I guess.

Hope you had fun making it! ^^

The downloaded file was not an apk

If it doesn't work - try Link below (Play Market link).

Graphics are really good and eye catching. Sounds are great too. Great work, thumbs up!

Very cool to see a game I can get on my phone!

luckily for you I have an android! It's cool to see mobile games for jams, that's a rare sight.

luckily for you I have an android! It's cool to see mobile games for jams, that's a rare sight.